Did the Boss bring down the Berlin Wall? 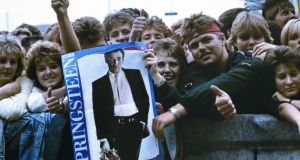 ‘He hasn’t the dazzling exoticism of Michael Jackson. He doesn’t adopt the show business gymnastics of Mick Jagger. He doesn’t imbue himself with the intellectual aura of Sting. For his fans, the superstar Springsteen is still the nice guy from New Jersey, a guy you believe everything he sings.”

That was how the sober East German television announcer intoned the arrival of the Boss on July 19th, 1988, in East Berlin. On a summer evening, television cameras panned across a sea of mullets and perms, stonewashed denim and home-made stars-and-stripes flags. And on many faces, a dazed smile that “the superstar Springsteen” had come behind the Iron Curtain to sing for them.

Some 160,000 tickets had been sold but the organisers, overwhelmed by the rush on the concert grounds, opened the barriers to all comers. The crowd swelled to 300,000, or even half a million by some estimates.

Now Erik Kirschbaum, a Reuters journalist in Berlin and long-time Springsteen fan, has written a new book detailing the drama before, during and after the four-hour concert.

It was just after 7pm when the 38 year-old American singer strode on-stage and launched into Badlands, modifying a refrain to urge his audience to “keep pushing ‘til it’s understood/and these badlands start treating us good.”

The crescendo kept building until his most familiar musical hook sounded and the East German crowd began cheering Born in the USA.

“It was an incredible and emotional day for us,” said Springsteen this week at a concert in Leipzig. “We were received so warmly, so many people came to see us [and] it remains to this day the most people we played to on one afternoon.”

The concert almost didn’t go ahead, Kirschbaum notes, when Springsteen found out the East German organisers, to sell the gig to a sceptical Politburo, had framed his appearance as a “Concert for Nicaragua”.

Though no fan of Reagan-era attempts by the CIA to overthrow the left-wing Sandinistas, Springsteen was outraged at being co-opted for Cold War politics. In his dressing room he wrote two sentences and, with his chauffeur’s help, transcribed them into phonetical German.

“I’m not here for any government,” he told his audience. “I’ve come to play rock’n’roll for you in the hope that one day all the barriers will be torn down.”

“Barriers” was a last-minute substitution, Kirschbaum writes, after the organisers feared the original word – “walls” – could have untold consequences. Springsteen agreed to the change but then rammed home his message with Bob Dylan’s Chimes of Freedom: “With faces hidden/as the walls were tightening”.

Would the show go on or would the authorities pull the plug? In the VIP area, East German politburo member Egon Krenz shrugged, reportedly said “We’re all against barriers”, and the show continued. Even the secret police were won over, noting in their Stasi concert report: “The atmosphere in the crowd is very good ... state security was not in any way compromised.”

But many who were there in 1988 beg to differ. What was intended by East Berlin’s hard-line leadership as a pacifier for their people, Kirschbaum argues, had the opposite effect and turned into a powerful agent for change.

Ten months later Hungary dismantled its barbed wire barrier to Austria and the rest is history. Connie Günther, a Berliner who assisted Springsteen and attended the concert agrees.

“They brought Springsteen and these other Western bands in to let off steam,” she tells Kirschbaum, “but it all backfired on them. It didn’t let off steam. It got young people thinking more about freedom.”

In Kirschbaum’s final analysis, Springsteen’s concert – the biggest East Germany would ever see – helped channel a young generation’s disillusionment with the grey status quo. “That turned into a broader rebellion — fuelled by a yearning for freedom that Springsteen epitomised,” he writes. “And that’s what brought down the Berlin Wall.”