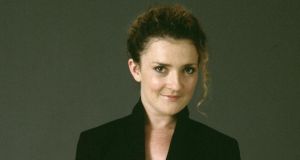 Do you think that a concert series should be like Ronseal, and do what it says on the tin? Or should it be like Hugh Tinney ’s European Masterworks series, which is promoted by the National Concert Hall, and just throw together whatever seems convenient at the time?

If you were at Wednesday’s European Masterworks concert you might well think I’m referring to the fact that one of the works, Finnish composer Kimmo Hakola’s Capriole, was dropped on the night. But I’m not. It’s not the exclusion that’s of concern, but rather some of the inclusions .

If you’ve got a capable violinist (Elizabeth Cooney ) and pianist (Finghin Collins ) on stage, and you want to include something by Romania ’s most celebrated composer George Enescu in the context of masterworks, what on earth was his Prelude Op. 9, doing there rather than his Third Violin Sonata?

The Prelude is the opening movement of an orchestral suite, and, most unusually, it has just a single melodic line. It’s played by the violins, with extra weight added by violas and cellos as necessary, and a long timpani roll adding tension towards the end. The notes are the same when it’s played by solo violin, but the effect is completely different.

His Third Sonata for violin and piano, however, is a masterpiece. It may sound like a freewheeling arrangement of Romanian folk material, but it is in fact a meticulous fabrication, every bit of it original, not a smidgin of genuine folk material in sight, and the score is notated and marked in minute detail, to create the effect of an improvisation in Romanian character. One’s a masterwork, the other is not.

What was Bach’s Chromatic Fantasy , originally for keyboard, doing there in an arrangement for solo cello which clearly taxed its arranger (Alexander Baillie ) well beyond his ability to deliver it with accurate intonation and rhythm? And what were throwaway violin and piano by Sibelius doing there at all, at all?

Happily, there were some genuine masterworks on offer, Bartók’s Contrasts (with clarinettist Carol McGonnell joining Cooney and Collins), and Brahms’s late Clarinet Trio (McGonnell, Baillie, Collins), both given characterful performances.

But the evening’s highlight was Thomas Adès’s Catch from 1991, a playful, witty piece, which engages in games of attraction and seduction between four players, and theatricalises the tensions by having the clarinettist come on and off the stage, and play from the auditorium in the course of the musical wooing.

Music by living composers is often presented as a tricky area for listeners. But the audience on Wednesday certainly gave the impression of loving this particular piece. And the fact that the newest piece to be played made the strongest impression did make it all the more unfortunate that Hakola’s Capriole for bass clarinet and cello, written in the same year as the Adès, was the piece that was dropped.

***
The BBC Singers’ short Irish tour under Fergus Sheil ended at St Ann’s Church in Dawson Street on Saturday. The programme ticked a lot of boxes, the Britten centenary (through the Hymn to St Cecilia , words by WH Auden), Irish music (through Irene Buckley ’s Sanctus ), the time of year (James MacMillan’s Seven Last Words from the Cross ) and added John Tavener ’s Funeral Ikos for good measure. The tour package also included a range of vocal and choral workshops, and a composer workshop under James MacMillan. Full marks for enterprise.

The concert itself was rather like a Hollywood blockbuster, with forceful, high-powered vocal tone substituting for the violence, explosions and chases, but with the same insistence on delivering the thrills and spills at a pretty constant rate.

What made it such a problematic undertaking from the start was that Britten’s Hymn spends much of its time in gentle, floating mode, with beautiful harmonic movement sliding and side-stepping with understated glee, or dancing on its toes with fairy lightness. Sheil and his singers delivered the piece with the fibrous strength of an opera chorus, prioritising line over harmony in ways that seemed quite alien to the nature of the music.

James MacMillan is a composer with a real killer instinct. He’s in command of a formidable arsenal of technical resources, and gives the impression of wanting to stir his listeners by going for the heart in as direct and effective a manner as possible. Subtlety of effect may not be his strong point, but he’s unlikely to leave anyone unstirred or indifferent.

There’s so much wow factor built in to his Seven Last Words – the contrasts between nostalgia, regret, loss, vehemence and railing are all starkly delineated – that the last thing the piece needs in performance is an extra layer of Jerry Bruckheimer style production values to heighten and exaggerate what the composer has already put there. But heightening and exaggeration is exactly what Sheil encouraged from the BBC Singers and the string orchestra which accompanied them. It was a technical tour de force, at once an overwhelming sonic immersion and a sensory overload.

Between the extremes of the Britten and MacMillan the calm spirit of Tavener was a welcome balm, and the double choir layout of Buckley’s Sanctus also provided a gentler immersion than the outer pieces.


***
If you’d actually been seeking out a musical approach to provide a contrast to the BBC Singers, you would have found it hard to come up with one more apposite than Julian Rachlin ’s handling of the RTÉ NSO on Friday. Rachlin is a violinist who also likes to play viola, and as if the major repertoire that two instruments open up to him might not be enough, he also conducts.

Friday’s programme concentrated on just two composers, Mozart and Mendelssohn, with Rachlin making every moment magical. He got the players to lower their voices, up their collective discipline, and make Mozart’s Marriage of Figaro Overture and Symphony in A, K201, glow through the precision, point and delicacy of the playing.

It may seem a bit curmudgeonly to say so, but Rachlin’s performance of the Mendelssohn Violin Concerto was not on quite the same level. His approach was unpressured, giving the music plenty of space to breathe. But the dual role of soloist and conductor seemed to stretch him a little too far, as if the need to keep the orchestra in line came to impinge on his still very fine violin playing, and vice versa. There were moments where everyone was simply not where they should have been, and those moments would have been easily remedied by the presence of a conductor.

The fine form returned in Mendelssohn’s Italian Symphony, buoyant, joyful, and, as in the Mozart, lit from the inside, so that all kinds of detail that might usually pass by almost unnoticed could stand out clearly without taking away from anything else. It was one of those performances that managed to create, again and again, the feeling that you were hearing the music for the first time. Here’s hoping it’s not too long before RTÉ bring him back.