Andrew Litton, who is in Dublin for one of his final appearances as conductor of the Bergen Philharmonic Orchestra, explains the job he has obsessed about since the age of 10

Norway's Bergen Philharmonic Orchestra, which claims to be one of the world’s oldest orchestras, made its Irish debut at the National Concert Hall on August 28th. 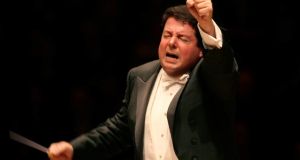 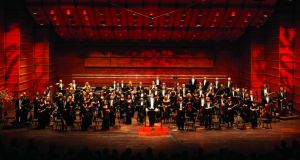 One of the first things Andrew Litton said to me when I met him in the conductor’s room in Bergen’s Grieghallen was: “I like that orchestra very much.”

He wasn’t talking about the Bergen Philharmonic Orchestra, which he conducts at the National Concert Hall tomorrow, but the RTÉ National Symphony Orchestra, with which he has made three very successful appearances in recent years.

He’s even more complimentary about the orchestra in Bergen, where he is stepping down after 12 years as music director. The Norwegians had some difficulty getting him to sign on the dotted line.

“I’d said no to the job twice, and the third time a couple of players took me out for dinner, which is a very quick way to my heart. They said, ‘The orchestra’s had a vote, and it’s unanimous: we all really want you.’ I thought of the really difficult commute [he was music director of the Dallas Symphony Orchestra at the time] and the fact that the orchestra needed so much work.”

Not on their playing, he’s quick to explain. “But they had no profile 15 years ago. I said to the guys, ‘It’s going to be really hard work. You’re going to have to give up the good life in a way, because we’re going to be doing a lot more touring, a lot more recording, working a lot harder.’ And they said, ‘Yes, yes, please, please.’ And they have done the work.”

The orchestra is back at the Proms in London this year as part of the trip that also brings it to Dublin. “I got them the first visit. But the re-invitation is courtesy of the orchestra’s ability and reputation. And there are all of these recordings being made, even with other conductors and for other labels. The orchestra was doing none of that when I started. I think the best decision I ever made, artistically, was finally saying yes.”

Litton’s interest in conducting began at the age of 10, when the native New Yorker was taken to one of Leonard Bernstein’s Young People’s Concerts. Respighi’s Pines of Rome blew his mind.

“I told my mother I wanted to be able to control sounds like that,” he says. “She said, ‘Whatever’. Up until that morning I had wanted to be a fireman. From that moment on, everything I did, even playing piano, became a means to an end.”

He conducted his first full concert with the BBC Symphony Orchestra in Bedford in 1982. “I had just won the Rupert Foundation conducting competition, and this was my prize concert. It was with Nigel Kennedy, a good friend from Juilliard, and it was my professional debut. My London debut followed in January 1983 with the Royal Philharmonic.”

He says he doesn’t know how he managed to win the competition. His experience was negligible, but so were his expectations. “I think it’s just chemistry as far as the success you might have with an orchestra. I have no idea what I might possibly have brought to the table as a 22-year-old conductor. Now, when I look back at how little I knew back then, it’s shocking.

“When you’re thinking about becoming a conductor, the two most important things to get as quickly as possible are experience and knowledge. You gain knowledge by lots of study and observing other conductors in rehearsals. But the experience part, that’s the tricky one.”

He was, he says, just extremely lucky. “I won the competition in January, and by June I was Rostropovich’s assistant in Washington DC. He was my mentor for four years. It’s where I learned all about Shostakovich and Prokofiev, of course. The great thing was that, because I’d won a competition, I was suddenly a professional conductor in the UK. Everybody likes young, everybody wanted to try me out. I was gaining lots of experience. And as an assistant conductor, I was able to go ask stupid questions.”

He probably got to ask stupid questions of his godfather, too. “He was timpanist in the Met Opera orchestra. And when I was 10 he said to my mother, ‘If he wants to be a conductor, he’s mine.’ And, basically, I spent three or four nights a week in the pit at the Met next to him. People talk about the golden age of opera; I was there. I remember Pavarotti’s debut, Renata Tebaldi’s singing, the most amazing Tristan und Isolde with Birgit Nilsson, and Karl Böhm conducting. For six years I did that, until the Met said, ‘Hey, no visitors in the pit’.”

He makes himself sound like the ultimate practical man when it comes to his role with an orchestra. “There’s a lot of components that go into the rehearsal process. A little bit of diplomacy, a lot of knowledge, knowing how to fix things that are not working. You get to the performance, you’re a little bit traffic cop, a little bit Rasputin, conjuring up as much passion and intensity as possible.”

Three-quarters of the work, he says, is done before the concert. “I personally believe that music isn’t music until you have a listener. You’re just practising if nobody’s listening to you play. It’s a live performance art. It needs an audience. Until then, nothing else matters. ”

After Bergen, one of his new roles is as music director of New York City Ballet. “The whole idea of conducting ballet, specifically the New York City Ballet, is that the repertoire is so incredible in that company. They did 15 Stravinsky ballets in the last three years. I can’t even name 15 Stravinsky ballets. It’s extraordinary. Their repertoire list is more impressive than that of most symphony orchestras.”

That, he says, is because one of the company’s founders, George Balanchine, set out to create a music-driven company. “In the old days their music director was a lovely guy called Robert Irving. If a dancer would complain to Balanchine that something was too fast or too slow, George would say, ‘Robert, is that the right tempo?’ And Robert would say, ‘Yes’. And George would turn back to the stage and say, ‘That’s the correct tempo.’ He deferred to the music.

“I think what Peter Martins, who’s now the head of the company, wanted to do by hiring somebody like me is to put music back in its place of prime importance.”

Bloody Sunday 1920: Who were Michael Collins’s hit team ‘The Squad’?
9