Classical Music: Choir of 16 voices in the GPO sounds larger than life

While no longer strictly in houses, the Great Music in Irish Houses festival has found good new homes 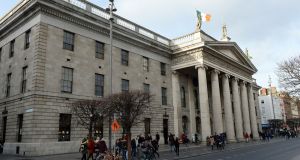 The Festival in Great Irish Houses, founded in 1970, was originally based in Castletown House and Carton House. Its director, David Laing, told the late Maeve Binchy in an interview in this paper that people “won’t have a chance of hearing such artists is such surroundings again for a long time”. He added that 18th-century music played in such surroundings “is something that will not be easily forgotten”.

He expressed an ambition to extend the festival to take in “half-a-dozen houses around Dublin”. It later went well beyond that and stretched its reach to all corners of Ireland, north and south.

The reach has contracted back to Dublin and surroundings in recent years and the meaning of the word Houses in the name has become so loose as to be almost meaningless. The shift is reflected in the current name, the Great Music in Irish Houses festival.

Innovation in a time of stress is no bad thing. And for the 2016 programme artistic director Ciara Higgins added two venues that no one is likely to forget, one small, one large.

By the standards of Castletown or Carton, the Casino at Marino, designed by William Chambers for the earl of Charlemont in the middle of the 18th century, is tiny, though not as tiny as it looks in the distance. It has the appearance of a strangely ornate, single room but there are 16 rooms on three floors; all the same, for concert use it is indeed very small. Only a privileged gathering of 40 tightly-packed people could be accommodated for a performance of works for one and two cellos on June 7th.

The sound of one cello was so full it was almost tactile, and the sound of two was definitely immersive. The programme included two of the greatest solo cello works, Bach’s Suite in G and Kodály’s Solo Cello Sonata, both played with highly-stressed expressivity by William Butt. The 19-year-old rapidly rising cello star Christopher Ellis played Gaspar Cassadó’s 1926 Suite, a work that’s well aware of both Bach and Kodály, with altogether more fluid flamboyance.

The two players joined forces in two pieces. Haydn’s Divertimento in D, Hob X: 11, was originally for baryton (a hybrid instrument with separate sets of strings for bowing and plucking that Haydn’s patron was obsessed with) and cello. Jean Barrière was one of the finest French cellists of the 18th century, and his Sonata No 10 in G, like Haydn’s divertimento, makes much of the sensually appealing colours and textures that two lithe and songful bass instruments can conjure up together. Butt and Ellis indulged themselves to the full in the sheer gorgeousness of the possibilities that were open to them.

The other new festival venue had an equally special atmosphere and, unlike the Casino at Marino, is unlikely to have been on many people’s radar as a concert venue in the 21st century. Yet the GPO, the rebel headquarters during the Easter Rising, has long-standing musical connections. In the early years of Irish radio, both before and after 2RN became Radio Éireann, the station’s music ensemble was based in and broadcast from the GPO.

I can’t imagine that the functioning post office and the functioning broadcaster ever collaborated on concerts. But on Sunday afternoon the office floor was decked with chairs and a small platform was erected beside the windows for the members of Chamber Choir Ireland to sing from.

Rarely have I heard such a rich tonal blend from a 16-voice choir, or heard the men of Chamber Choir Ireland under Paul Hillier sound as though they had the benefit of some kind of turbo booster to make them sound consistently larger than life. The effect was at once appealing and disconcerting, rather like a movie shot with filters that make for colour balances that are intriguing but not quite believable.

The programme was a Shakespearean one, dominated by the always chorally adept sound world of contemporary Finnish composer Jaakko Mäntyjärvi, with Karin Rehnqvist’s The raven himself is hoarse, and an intense trio, When shall we three meet again? by Samuel Webbe (1740-1816) balancing things out.

There were also Brecht settings by Kurt Weill of the kind where the words and music seem welded, and A Half Darkness, a 2016 commission from Belfast-born composer Stephen McNeff to a text by Aoife Mannix that takes as its starting point a number of perspectives from the time Pearse spent in the west of Ireland in the summer before Easter 1916. On a first hearing, its sometimes piercing expressivity came to seem somehow overburdened by the weight of the sonority.

The choir was also heard on Wednesday, at the Freemasons’ Hall in Molesworth Street, in a programme called Minimal Roots . . . and a Few Green Branches. Although the evening included European premières of works by living minimalists David Lang (Where you go) and Terry Riley (Madrigal), it was actually the works by much older composers, John Cage (ear for EAR, and Story, from Living Room Music) and Ernst Toch (Spoken Music, with the wonderful Geographical Fugue) that sounded best. The newer music sometimes seemed to be in need of greater aeration.