Born to be Vile 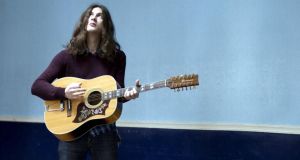 Game-changers can come along at the most unexpected junctures. For Kurt Vile it was some time around 2011, when his fourth solo album (Smoke Ring for My Halo) appeared almost 15 years after he first tentatively dispensed a primitive mix-tape of original songs into the world.

The 34-year-old doesn’t really strike you as the sort who gets caught up in either showbiz glitz’n’glamour or the hedonistic rock’n’roll scene. But there’s no question that Smoke Ring changed things for him.

Speaking from his native Philadelphia, where he’s been holed up over the winter months with his wife and two kids, Vile is a likeable character with an endearing (and occasionally exasperating) conversational tic of stopping mid-sentence and taking off on a rambling tangent. Of course, those familiar with his music will be use to that.

A founding member of shoegazing Philly indie-rockers The War on Drugs, Vile has been releasing albums under his own name since 2008. Until Smoke Ring for My Halo (his first on Matador Records), he was viewed as something of a lo-fi cult hero; last year’s excellent Wakin on Pretty Daze solidified his position and saw his proverbial stock skyrocket.

“I felt that my first record with Matador was in the bag, ready for world domination – but not everybody understood that record,” he laughs. “It’s good to see that Wakin on a Pretty Daze was critically accepted and the fanbase has grown too. It seems to grow a little bit more with every record.

“I knew I had to step it up anyway – that’s what you’re supposed to do. So I just aimed to make more of a classic-sounding record, one like my favourite artists from the ’70s. All of a sudden I had a good producer and I was working in hi-fi studios, and we could finally deliver the music for what it was. I guess, ultimately, it was just me growing as a musician with more experience under my belt, and achieving what I wanted to.”

Wakin on a Pretty Daze retained traces of the same lo-fi quality as its predecessors, and its meandering instrumental passages pay homage to the psychedelic element that Vile has always dabbled in. Still, its poppier moments meant that many found it his most accessible record to date.

“I guess it’s cool that it’s been successful, but it’s funny, too, because the first song is nine and a half minutes and the last song is 10 minutes. In a way, Smoke Ring was the album that had the songs that both a kid and their mom could hear and both like. Wakin on a Pretty Daze is not 100 per cent conventional but it’s sort of classically conventional, with a psychedelic sneer that’s not overpowering. So if people see that as accessible, I guess it is.”

He says the transition from “cult hero” to “in-demand musician” has been interesting.

“You reach a point where all of a sudden you get offers all the time and the fees get better. And maybe the people who are booking you – and, y’know, I love everybody that works with me – but they see that it’s taking off, and all of a sudden you just agree to all of these tours. I do like to do them, ultimately, but in between it’s hard to extract yourself.

“For example, I’m sure once I start playing on this tour I’ll be right back into it, but I guess in-between there canbe a sort of anxiety – it can feel like there’s no end in sight.But then once you start playing, you love it, ultimately.”

Vile has paid his dues over the years, working jobs such as forklift driver in the early days. However, throwing in the towel on music was never an option.

“I had always been releasing myself on CD-Rs, something I always thought that only I was doing. But then there were bands coming out like Ariel Pink, and all the acts from that lo-fi scene, and I realised that I wasn’t the only one. So that was encouraging.

“I’d been working blue collar jobs and never really went to college . . . I was always just sort of hustling. There were definitely times I was thinking it would never happen, and I would go through ups and downs. I never considered giving up music, but there was a point that I thought no one would ever put my music out.

“It took me a while to find an ‘in’ that way. I mean, some people get lucky, but ultimately it doesn’t happen a lot. So once I understood the DIY thing was tailor-made for my music – that you can put something out on the smallest label possible and still get your record reviewed, and stuff – that was a big thing.”

Adam Granduciel, Vile’s old foil in The War on Drugs, is enjoying the best reviews of his own career with their new album, Lost in the Dream. The ex-bandmates’ demanding schedules meant that neither was involved in the other’s most recent output for the first time in many years.

“With my next record, I’m definitely not gonna go in with a big-time producer at first. I’m just gonna workshop stuff, and I would like to do some stuff in Adam’s studio because he has his own space in Philly now. I want to have him involved, along with tons of other friends. I have a feeling we’re gonna see each other more. Both of our kind of breakout records came out very close to each other, and ever since then, they were on tour and so was I. But we’ll get back to it.”

Vile is writing new songs, but admits his hectic touring schedule makes it that much harder to be spontaneous.

“I was really productive for a while, really excited about certain lyrics and I have lots of concepts, so I know when I get going it’ll be fine. I think the thing to do is to just book studio time and go in. Otherwise you just keep thinking, thinking, thinking about how you want do it, and all of a sudden you’re not getting stuff down and hearing stuff back. That’s the funny part of it all; you’re just booking yourself seven months in advance.

“I’m not complaining; I’m just saying that once in a while you get into overload. It can’t all be bliss, because art comes out of inner turmoil, ultimately, right? I think that’s always been my secret!”

Whatever Vile does next, the fire in his belly has been well and truly stoked by his newfound popularity. Although he continues to acknowledge his CD-R-releasing roots, the sky is the limit in terms of ambition.

“Ultimately you always want to do more. I do want to get bigger and I want sell a lot more records. I’ve sold a good amount with this one, but I do want to sell more. Do I want to win a Grammy? Sure. I’m kind of ignorant of the politics, but I’m pretty sure that there’s some political level that I haven’t reached yet as far as Grammys go. Maybe I’ll get nominated next time, but I feel like somebody on a major label is more likely to get nominated for that kind of thing. But then there are bands like Bon Iver on Jagjaguwar winning them, so I guess certain people at my level are doing it. So that’s awesome.”

Playing to bigger crowds is also on the agenda, though he says there’s no point in selling your soul to get there.

“We’re at a point where we’ve been touring like crazy and you’ve gotta figure it out again and make it fresh again. I don’t just want to tour like a travelling stage act and do the same set every time – play Wakin on a Pretty Day and Jesus Fever over and over again, sort of like The Flaming Lips. Obviously they have an epic live show, but they were opening with that song from The Soft Bulletin for years and years. And that’s cool, too, but I guess I always want to break it down and start up again.

“I know I’m gonna get all of these offers that could have me touring all year, but I feel like I’ve gotta step back, break it all down and switch it up somehow. So it’s not just about playing to larger crowds for the sake of it – that’s a grind if you’re doing the same show the same way all the time.

“But I’m looking forward to whatever comes next. Break it down, switch it up and start again.”