The 360 shows were the highest-grossing tour of all time. The Irish band’s new one, Innocence + Experience, is a series of intimate indoor gigs. The industry will be watching the audience reaction – and the stage performance of post-bike-crash Bono 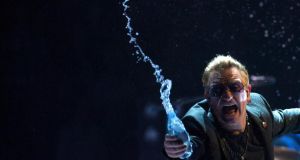 U2 frontman Bono flings water at the crowd during the band’s first concert of their new world tour in Vancouver. Photograph: Jonathan Hayward/AP

Two things bring U2 out in a cold sweat: a new album and a new tour. The band’s detractors came out in force last September, when U2 gave away their current album, Songs of Innocence, on iTunes. When U2’s new world tour begins, in Vancouver on Thursday, they will be ready to pounce if even a single cue is missed. And they’ll be doing so not only in the music press but also in the business pages. The last U2 concert tour was the highest-grossing of all time, with the 7.2 million tickets bringing in $736 million (€653 million) in sales.

But that tour – 360 – took place in stadiums, sometimes to crowds of 80,000 or 90,000 a night. This one, Innocence + Experience – or, as U2 prefer, iNNOCENCE + eXPERIENCE – will stay indoors and play to just 20,000 people a night. Running until August in North America and from September until November in Europe, it involves 70 dates in 20 cities. (Reports this week that the tour will come to 3Arena, in Dublin, in December are untrue. The band will play Dublin, but no dates have been confirmed.)

An issue that will hang over Thursday night’s gig in Vancouver is Bono’s health. Since a serious cycling injury last November, in Central Park in New York, the singer has been struggling for fitness. – The injury was far worse than he admitted at the time. He broke his arm in six places and fractured his eye socket, hand and shoulder blade. As of this week he has a titanium elbow and still can’t bend two of the fingers on his left hand; his injuries are so bad that he may never play the guitar again.

All eyes are on the frontman at a rock show. Bono has always been an exuberant stage presence, and fans and industry watchers will be keeping a close eye on his mobility next week.

Those at the gigs will also be in for very different kind of U2 live show. A single light bulb is the opening image of the performance in Vancouver on May 14th. The band’s most stripped-down show yet begins by taking audiences inside Bono’s bedroom at 10 Cedarwood Road in Finglas.

Under that bulb a teenage Bono listens to the music that made him want to be in a band: songs by The Ramones and The Clash. As the narrative-driven show progresses, the audience see them play their first shows in London and make their first trip to the US.

The first half of what sounds like something approaching an autobiographical musical will focus on their “innocence”. In the second half – this is the band’s first show with an interval – U2 move from the main stage via a giant walkway to the opposite end of the arena, to play on a second, “experience” stage.

It’s a high-concept idea that is not without risks, and the band have been in Vancouver for a month, putting in long rehearsal days.

U2 say now that it was always the plan to scale down and go indoors with this tour. That could sound like spin were it not for the fact that the confessional and autobiographical songs of their current album suits a more intimate show.

The band are playing at least two shows in each city of their tour. The initial idea was to follow the first night’s largely acoustic Innocence show with the second’s largely electric Experience show. That plan was scrapped in case fans at either show felt they were missing out.

The first half of each concert will now be largely the same, but the second half will vary. The band will play hits but rework some of them for the smaller stage.

In a sonic innovation, the sound system will be placed on the ceiling of the venue, so that the music falls downwards, and evenly, on audiences. It’s a risk, but the band are trusting that it will work.

As the fuss over the unconventional release of last September’s album begins to recede, nerves have steadied in Vancouver this week with a New York Times report that the tour has already sold 98 per cent of its 1.2 million tickets, including six nights in a row at Madison Square Garden, in New York.

The band are also travelling with a mobile recording unit, so they can finish their next album, Songs of Experience. While Songs of Innocence focused largely on their early Dublin days, the new album is expected to explore the band’s experiences in the 1980s, such as the Live Aid concert and the Joshua Tree album.

Uncertainties remain over the tour. Although no dates have been announced beyond November this year it is possible that the tour will go outdoors, into stadiums, during 2016, with a return to the US, more European dates and, possibly, additional legs in South America and Australasia. This wait-and-see approach is not unusual at this level of the live-music business.

Next year marks 40 years since the band formed in Larry Mullen’s kitchen – it was September 1976. They remain a bundle of contradictions: a band forged in the white heat of punk and new wave who dispensed with the pieties of that scene to chase the big time.

Despite the 150 million albums they have sold, the biggest tour of all time, and a record 22 Grammy Awards, U2’s tense, nervous headaches never abate. The band are insecure, prone to bouts of musical self-loathing yet also convinced that one of these days they will be able to write a song as sublimely perfect as The Ronettes’ Be My Baby or The Clash’s (White Man) In Hammersmith Palais.

Given the physical battering Bono has taken, not to mention what Mullen has put his body through drumming over the years, it would have been easy for the band to cash in their chips and go out on a lucrative greatest-hits tour before retiring. But five days away from a new tour they’re up all night, struggling over setlists, making last-minute changes and reworking entire sections of the show. A lot’s riding on that single light bulb.