Björk: ‘We need music so much’

She is on show at MoMA in New York, and her new album, ‘Vulnicura’, pushes at the sonic boundary, but for Björk it’s all about the song 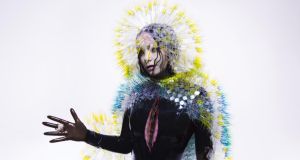 Björk has an appointment to keep a few hours after we speak. She’s due at the Museum of Modern Art in New York to discuss some aspects of the museum’s forthcoming exhibition of her work. By the numbers, that’s the stuff of 20 years and eight albums, distilled into five gallery rooms.

Björk says she was surprised and nonplussed when she was first approached about the exhibition. “It’s a really functional problem, just how do you put music and sound in a visual museum? I told the curator that it couldn’t be just memorabilia because that would be very boring, all those dresses.”

Bit by bit, the exhibition took shape. “Some aspects are obvious. We have the Biophilia instruments, which are pretty physical, and you can put them in a room and you also have the apps.

“There’s another room which will be almost like a cinema with all the videos I’ve done before. For a lot of the directors, you can only see their work on YouTube with bad sound and bad visuals, so it’s very satisfying, important and rewarding to put them on show with amazing sound and visuals.”

She’s excited about the technology involved and is on her way to visit the museum and test if the GPS sensors and the rest of it work “both technically and emotionally” in the space. There was a long lead-in time to test the apps that accompanied Biophilia, but she doesn’t have that luxury with this exhibition.

Björk also knows she can’t avoid the frocks. “The riskiest part of the exhibition is that retrospective. I get it when you have a crazy craftsman or fashion genius and you want to see their work in a museum, but it’s a much different context when it comes to a musician and clothes.

“We’re trying to somehow show people that these outfits I wore were an extension of the music and that they were part of an emotional journey. When I asked Alexander McQueen to do a dress, it was not because it just looked great. Often if you’re doing a tour, you have to choose an outfit that you can run around and sing and sweat in, and that is part of the music that you are making.”

It always comes back to the music. “The music is more important than anything else,” she says. Everything else takes a backseat. All those elaborate outfits, all those apps, all those aids and assists: it begins with the music.

And the music usually begins with a walk. Ever since she was a child, Björk has found that melodies come easier to her when she puts one foot in front of the other. Strolling and stomping have provided the starting points for so many songs and albums down through the years.

Bjork's outfits through the years

After the walking comes the rest of the work. It’s a solitary pursuit, another reason why putting her songs on the walls of MoMA proved so difficult. “It’s a part of what I do which hasn’t been documented for the reason that you can’t document it. If you did, it wouldn’t be solitary any more.

“I would say that 60 or 70 per cent of making my albums is done by me on my own. That could be working on a piece or writing lyrics. When it comes to the arrangements, when I sit in front of the computer and work on the structure of a song and that kind of thing, it goes up to 80 per cent of the album, which I do in private on my own. I only invite in guests and collaborators at that stage when nearly everything is done.”

In the case of new album Vulnicura, writing those songs was even more difficult because they were about the break-up of her long-term relationship.

“I heard John’s beat online and I knew immediately that it would fit exactly with the song. I contacted him and it was very awkward because I had never worked like this before. I said to him, ‘it seems like I’ve made a mash-up of your song and my song and this is what we got. Are you okay with this, can I release it, how do you feel about this?’ John said yes and we put it on the album. I was really lucky that he was up for it.”

For Björk, collaborations are about the right chemistry. “I’ve been lucky enough to do so many collaborations and every one has been different. Sometimes, I hear someone’s work and I decide I want to work with them there and then. Other times, I might know someone for years and suddenly, after five years of doing stupid things and getting drunk and partying, we have a song. In those cases, when it’s friends of friends and there’s a connection, you trust them a lot quicker.

“One thing which is very underrated is the chemistry between two people. You might have someone who is very talented and amazing but the spark is not there. I really respect this chemistry thing, it’s such a powerful, sacred, special thing. When it happens, you have to be careful and not take it for granted and not abuse it. You get that mutual feeling and you get the rush and high that comes with it and you have to respect it. You can’t mess with it or squeeze something that’s not there out of it. It has to be unconditional, it can’t be all about the product. If it becomes about the song, you’ve lost.”

She has strong views on what’s currently happening at home in Iceland. “We sent some banksters to jail but it’s taken six years for that to go through the system. I don’t mean it in a nasty way and I don’t want people to go to jail, but I think it’s important for the next generation to see this example of what happens if you steal people’s money.”

Yet she fears that a lot of the changes that have occurred in Iceland over the last few years could be undone. “We had a very left-wing government for four years after the bank crash and they had to tidy up a lot of the mess caused by the neo-liberals. A new government was elected over a year ago that is really the same people who caused the bank crash, and really right-wing, and they’re doing some horrible things.

“They’re basically undoing what the previous government did, privatising the health system and education system, approving the dams that we fought against and allowing aluminium factories to be built everywhere. The list goes on.

“I’m not saying for a second that I’m very left-wing: I’m very neutral, I’ve never voted for anything in my life. I approach this more from an environmental angle. But the situation now is so bad that you have to hope there will be another revolution. During the crash, a lot of Icelanders went to Austurvöllur square and hit pots and pans for months until the government resigned. I feel that this is something which should happen now because what this government is doing is even worse than before.”

Debut (1993)
There was a solo album back in 1977 from a 12-year-old Björk, and a great run with The Sugarcubes, but this was the big arrival. An album sonically in tune with the London underground dance clubs which caught her imagination at the time.
Homogenic (1997)
Bold, brave and adventurous, Homogenic was Björk forging a new way of doing things with electronic music. The Icelandic String Octet helped Björk and co-producer Mark Bell find common ground between classical and electronica, but it’s as much her moody meditations on love which make this such a wow.
Vespertine (2001)
Intoxicating and infectious in the strangest possible ways, Vespertine was where Björk went deep within herself to provide the ballast for these great, honest, fragile songs. Full of intrigue and wild possibilities.
Medúlla (2004)
This may be Björk’s a capella album but it makes a hell of a lot of noise. With vocalists Rahzel, Japanese beat-boxer Dokaka, Mike Patton and Robert Wyatt, Medúlla is another Björk album you could not mistake for anyone else in the galaxy.
Vulnicura (2015)
This season’s colours are most definitely the blues. While Björk has often written about the giddiness of being in love or falling in love, Vulnicura tracks the end of her long-term relationship with artist Matthew Barney. An album which hits you again and again with its heartbreak, grief and reality.


Vulnicura is out now. Björk: Archives, a retrospective book covering her career, will be published by Thames & Hudson on March 30th

Summer is an astonishing finale to a prescient series
7

Robert Sheehan: ‘I was a contrarian f**ker. I thought it made me seem more edgy’
9