Beyoncé’s way with words: lyrics of style and substance

No sooner has Beyoncé unleashed a line than it seems to become everyday slang. She crafts lyrics of substance and style from “Becky with the good hair” to Destiny’s Child 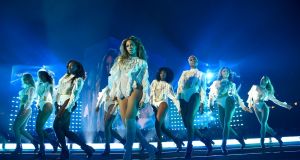 Beyoncé performs during the Formation World Tour at the Georgia Dome, Atlanta, Georgia in May 2016. Photograph: Kevin Mazur/WireImage

“You know you’re that bitch when you cause all this conversation”: so utters Queen B at the climax of Formation, her giant hat tipping in the breeze. Not only does Beyoncé create a tornado of controversy and gossip with her every move, she’s now so damn powerful she can inject words into common parlance and give them a new definition with such speed that not even Susie Dent in Dictionary Corner can keep up.

Snoop Dogg, with his nod to George Clinton and the boys, may have coined the phrase Bootylicious on Dr Dre’s classic album The Chronic but it was Beyoncé that brought it out of the kennel and into public consciousness with Destiny’s Child. Her homage to a lady’s curves and swerves was her first light-hearted attempt to address the issue of body confidence. At that time (2001), pop culture was in thrall to the needle-thin triumvirate of Paris Hilton, Mischa Barton and Nicole Richie, with only Jennifer Lopez bringing up the rear. These were the days before the Kardashian clan elevated booty from the butt of the joke to the star of the show. With the word reclaimed from Snoop’s clutches, minus his leering gaze, it instead became a rallying cry for women everywhere to embrace their “jelly”.

Bootylicious might not be the buzz word it once was but it started Beyoncé’s journey to becoming the urban wordsmith she is now. These days her references and terminology are couched in layers of meaning and interpretation. As she has grown as an artist, lyrically she has become more cryptic and complex, with her songs sending social media buzzing and fans searching for explanations transforming innocent words to mythic truisms as they scrutinise every line.

The singer’s “surprise” album in 2013 had plenty for them to chew on. It was a kinky treasure trove of weird sexy slang. From the salacious sweetie metaphors of “‘Skittles”, “cherries” and “cake by the pound” to the Lewinsky images , it was a lesson in lasciviousness. However, it was the duet with her husband that really caused pearls to be clutched and a saucy slogan to be born.

Surfboard. Such a simple word with its connotations of the Beach Boys and the most bleached out of American dreams. In the hands of Mrs Carter, though, the word transformed into “Surfbort” and it became so much more complicated not to mention suggestive. In 2014 were fans really walking around with a nickname for Jay-Z’s junk emblazoned across their chests? Or is “Surfbort/board” a very energetic sexual position performed in the Carter-Knowles household on occasion? Or is it even a metaphor at all? Is Drunk in Love, Beyoncé’s ode to coming home hammered, hitting up the Monster Munch and thinking about learning to surf one day?

As a woman of mystery we may never truly know. Beyoncé likes to keep her cards close to her chest and has only recently let some of the deck fly with new album Lemonade. Within this labyrinthine landscape of frustration, anger and despair there are also breadcrumbs dropped along the course for the listener to collect. There are fun visual signifiers, such as the “hot sauce” Bey says she carries in her bag in Formation and the baseball bat slung around her neck in the Hold Up video. But there are also the darker references.

The phrase that the Beyhive were determined to decode and has now become a stinging term of abuse is “Becky with the good hair”ie the infamous woman referred to in stark terms at the end of the biting track Sorry.

“Becky” is a derogatory term used to describe a basic Caucasian woman with typically “straight” hair. It’s been floating about the hip-hop world forever from forgettable artist Plies repellent rap of the same name to the mainstream hit Baby’s Got Back.

Beyoncé cleverly uses it to skewer the idea of the mistress, the unchallenging other that can slip easily into a man’s life. “‘Becky with the good hair” is not one single woman: she is a composite of all the secret or current lovers that have left women breathless with hurt. Beyoncé knows her audience and has liberated a name from the male dominated hip-hop forum to make their own; it’s a moniker to spit out, synonymous with the thudding heartbeat of rage.

This rage seeps through the album but that doesn’t mean it’s without its moments of levity. The one phrase that will reverberate around Croke Park on Saturday is “slay”. Like most of her other famous phrases it’s not a true Beyoncé term obviously; every commanding female pop star who’s hit the big time has stolen some LGBT vocabulary along the way – ask Madonna. It’s been used by everyone from RuPaul to Lady Gaga but it’s the repetition of the word throughout the anthemic Formation that puts the Yoncé stamp all over it.

Just like Flawless before it, it has become her personal chant, an inspirational mantra to be used by her audience to remind them that they woke up like this and they’ll live to slay another day – which sounds good in any language.