She’s a pure bubble-gum popstar, and that makes the Manchester attack all the worse 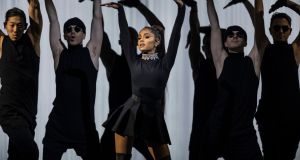 Saturday night at Dublin’s 3Arena wasn’t a place for the cynical or the achingly cool. Ariana Grande’s concert was for young teens in giggling groups Snapchatting and squealing at each other through the crowd, breathless with excitement, waving frantically at the pony-tailed dot on the stage in front of them.

There were younger ones wide-eyed and entranced in their light-up cat’s ears and branded tour T-shirts, delighted at the prospect of being out way past their bed times to see the ex-Nickelodeon star.

Harried mothers and fathers raised their children aloft on their shoulders so they could take in the sea of lights and bat away balloons.

Gay guys and their straight girlfriends screamed every line of Side to Side into each other’s faces like they were in on a hilarious secret.

Ariana Grande is a popstar in the most bubble-gum sense: a children’s television actress turned all-singing, all-dancing chart-busting phenomenon. Her glossy Facetuned features give her the look of a cute Disney cartoon character.

She creates R’n’B-tinged candyfloss tunes that are on constant daytime radio rotation. The most scandalous incident she’s ever been involved with was when she got into trouble for licking some doughnuts in a shop.

Her fans are predominately young girls who ape her trademark high ponytail, pouty mouth and exaggerated eyes – mini-wannabes playing pop dress -up, at a time in their lives when pop music means so much.

The Dublin gig, the start of her European tour, looked full of first-time concert-goers: dry-mouthed kids whose hearts were beating to the sound of their favourite songs, tracks whose lyrics they’d used as their Twitter profile bios, tunes they’d sent to each other on Whatsapp messages surrounded by emoji hearts.

Pop’s job is to release a listener from their daily lives and elevate them to a place of happiness for three intoxicating minutes. The shock reeling through people today is the thoughts of this fun, fantasy world of pinks and whites, of glitter and confetti interrupted by nightmarish darkness.

When parents send their young kids out to a show like Ariana Grande they should worry only about what time they’ll be home, whether they’ll overspend on useless merchandise, and if they have a coat for later.

A pop show like Ariana Grande’s is a place where you hug your friends at the end of the night because you’ve witnessed a slice of life-affirming musical entertainment. No one should be hugging someone out of relief that they are still alive.