He’s a vital element in Arcade Fire, but Will Butler is ‘stoked’ to be going on the road with a small band in support of his minimal-sounding solo album, ‘Policy’ 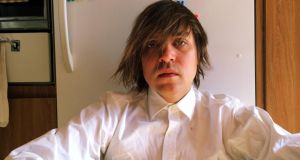 Will Butler is the live wire of Arcade Fire. His big brother Win fronts the most lauded band of his generation, but Will is no shrinking violet strumming in the background.

The younger Butler takes plenty of risks for the cause of shaping his band into one of the most exuberant live spectacles in modern pop. He jumps head-first into mosh pits, clambers up lighting stands and over speaker stacks. He has even braved diving into a moat in Sweden separating the stage from the audience and has been known to set his sister-in-law Regine Chassagne’s hair on fire. “It singed and smelled like burnt hair, but there was no real danger,” Butler helpfully clarifies.

“I twisted my ankle in Mexico last year and it took me nearly eight months to recover. It was a terrifying moment, but it wasn’t the end of the world. I’m older and fatter now [Butler is 32] and I heal a lot slower, so I’m not sure I’ll be reaching for the balcony in Whelan’s. I’ll see where the spirit takes me.”

Butler plays Whelan’s this April, which is a minuscule venue by Arcade Fire’s enormodome-headlining standards. One tweet from the show’s promoter and, 300 seconds later, the show was sold out.

Even if you think Arcade Fire are the most overrated band of the century, who sold their souls to the corporate rock devil long ago, you have to admit they’ve gatecrashed the mainstream in the most spectacular of fashion. Their 2004 debut Funeral featured zeitgeist-capturing songs about hearts filling up with nothing and summers turning to dust. In 2011, they scored one of the biggest shock wins in Grammy Awards history with The Suburbs taking Album of the Year, seeing off competition from pop heavyweights Eminem, Katy Perry and Lady Gaga. Award presenter Barbara Streisand actually thought The Suburbs was the name of the band, and Twitter clogged up with tweets asking, “Who the hell are Arcade Fire?”

Long-standing fans include Bono (who chose Wake Up as the intro music for U2’s Vertigo tour in 2005), Bruce Springsteen, Davids Bowie and Byrne, and US president Barack Obama. At an early show on St Patrick’s Day in 2005, I watched them perform in the University of London Union to a small audience that included Jarvis Cocker, Bernard Butler, Geoff Travis and Chris Morris, who watched Will Butler and Richard Reed Parry dementedly bash each other on the head with drumsticks. (Fortunately, they wore crash helmets.)

Butler is now taking temporary leave of the lucrative comfort zone of the band. “I’ve had solo songs and ideas percolating for quite some time,” Butler says. “I’ve wanted to do my own record since I was 15 or 16. However, I never really thought much about doing anything concrete until early last year.”

Last year’s game-changer was when Will and Owen Pallet (strings arranger for Arcade Fire, Robbie Williams, Alex Turner’s The Last Shadow Puppets and Taylor Swift) received an Academy Award nomination for their soundtrack to Spike Jonze’s Her. Steven Price walked away with the Oscar for Gravity, but the nomination did wonders for Butler’s self-confidence.

“Suddenly, my name was out there,” Butler says. “I figured it might as well be attached to something I did totally by myself. Also, I knew this record would have an element of surprise. People know me from Arcade Fire and maybe the Her soundtrack, so now they’ll be wondering, ‘What the heck is this?’”

The results are Policy, an eclectic but extremely minimal record compared to the ornate orchestral pop and millennial bombast of Arcade Fire. “Part of the idea was to do it loose and raw,” Butler explains. “I did the bulk of the recording in the space of a week in New York. The only intention was to bang it out. I don’t think you could exactly call it a DIY record, because it was very professional process, but I wanted to keep that spirit. The first idea tends to be the best idea, so I wanted to bring it to its conclusion quite quickly.”

Life on the road promises to be a less daunting affair than the small touring army that Arcade Fire employs to make massive shows like last summer’s Marlay Park hooley a reality.

“It’ll be great and I’m really looking forward it,” Butler says. “There is just four of us in the band, a tour manager and a van. There will be upsides and downsides and I’ll probably have a lot less nice smoothies and fancy catering, but after a long tour playing arenas and giant fields with a 12-piece band, I’m really stoked to be playing bars with four. Don’t worry, we’ll still be very loud.”

At the risk of making some readers feel very old, it will be 10 years this September since Arcade Fire played their Irish debut at Electric Picnic. “When we were discussing the original tour routing with the booking agent, I was asked for my comments,” Butler says. “All I said was that the tour had to end in Dublin. I love playing Ireland. I’ve got a friend in Dublin who is a professor in Trinity and he takes me around. I love the Winding Stair. I’m not a coffee drinker, but I love 3rd Floor Espresso [3FE)]. They’ve provided Arcade Fire with coffee connections all across the world. The last time I was in Ireland, I spent three days hanging out in Co Clare. Colin from 3FE sent me to Moran’s Oyster Cottage, which was wonderful.”

Butler is maintaining a long-standing Arcade Fire tradition with a dollar, euro or pound of every ticket sold going to non-profit humanitarian health care organisation Partners in Health.

“Our relationship with Partners in Health originally started from their work in Haiti, where they’ve been for 30 years,” he says. “Obviously, there is a connection with Regine, who is Haitian. Their core principle is the notion that some lives matter less than others is the root of all that’s wrong with the world. It has been very exciting to watch them grow. Now, they work all over the place. They went into West Africa to fight Ebola and they’ve been in Rwanda for a long time.”

Butler is quick to dismiss any suggestion that his solo career marks any significant hiatus for Arcade Fire. “No matter what we do, our albums seem to come out like clockwork every three years or so. I bet it will come out in late 2016, or maybe early 2017.”

“Yeats is dead and gone, but William Butler is still alive and well,” he jokes. “When you think about it, Yeats’s career is the ultimate benchmark. He always upped his game and developed his craft. Then he won the Nobel Prize for Literature, but he continued to get better and kept writing great stuff. It’s a tall order, but that’s my goal.”

WHAT THE STARS THINK OF BUTLER AND ARCADE FIRE

“When we heard Funeral, we were all prepared to get day jobs. But instead of giving up, we just tried harder.”

“Coldplay’s Chris Martin has been saying he’s discovered them first. But I did. So there.”

David Bowie underlines his ‘I Heard Arcade Fire Before You’ credentials.

“Album of the year - Arcade Fire? Um. Never heard of them.”

Rosie O’Donnell admits she is firmly in the ‘Who are Arcade Fire?’ camp on Grammy night.

“Anybody that comes back with a double album, to me, needs to pry themselves out of their own arsehole. This is not the 1970s, okay?”

It is probably safe to say Noel Gallagher isn’t a fan.