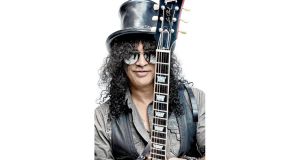 In advance of his gigs in Dublin next month, Slash talks guitar solos – and Axl – with RONAN MCGREEVY

Apocalyptic Love, your latest album, has been well received by music critics and by your fans. How do you feel about it?

I make a point of not reading what other people think, good or bad. I think it is a good record and I had a great time making it.

It started out as a pick-up band to support my first solo record , but it was one of the one-in-a-million situations where all the pieces fitted together.

During the 2010 tour, I decided to make another record and that is what Apocalyptic Love is. It was a really inspired couple of weeks in the studio recording it. It was done as live, recorded to tape and Eric Valentine is a great producer and engineer. It was a really good time.

There is one song on the album called Anastasia which has a neo-classical intro. Some of your fans say you borrowed it from Bach’s Toccata and Fugue in D minor. Is that correct?

In this really interesting day and age of social networking, it started with just one person who said it was a Bach thing. I had no idea it sounded like a Bach thing and then everybody asked me about it. I think it is just the style of the arpeggios that makes people think of Bach. Still, there are worse musicians to be compared to than Bach. I’m proud of the song. I always liked it. It was one of the songs that came up at the tail-end of the recording when we were in pre-production.

It actually started when we were playing our last European tour. When I was doing a guitar solo, I stumbled on this little phrase and it stuck in my head. I kept trying to do something with that phrase every night after that. Then it got longer and longer.

When I came home off the road, it became the intro riff. The rest of it just fell into place.

My hooking up with him was just by chance. I had heard of him for years, but I had never met him or heard him sing.

When I was doing that last solo record, I needed somebody to sing two songs (Back to Cali and Starlight). I was going to shelve those two songs, though they were good, if I couldn’t find the right singer for them. Then I heard that Myles was in London working with Led Zeppelin for their ill-fated comeback tour. I thought to myself “he’s got to be good”. I sent him the music and he sent me a demo with vocals back about a week later. That was Starlight.

As soon as we met, we got along very well creatively. We did the album version of the song in the studio in LA, and it was one of those seemless kind of synergetic moments and it has been going on like that ever since.

I’m beginning to think it was fate. I really wasn’t looking to be where I am now at that point.

How did you feel about Guns N’Roses being inducted into the Rock and Roll Hall of Fame and Axl Rose not showing up?

I wasn’t disappointed. I was more relieved at the time because prior to that it was such a negative subject. At one point I thought, if we all show up, then what? When he said he wasn’t coming, I thought, “good, at least I can do something”. Duff and I spoke and we rehearsed what we did together. That in itself was a good thing.

Do you think his non-appearance finally put to bed the expectations that the original Guns N’Roses line-up would ever reform?

I think more than anything it put it to bed for Steve Adler . He was trying the hardest to make it happen because he missed a lot of it. He was finally resigned to the idea that it was never going to happen. I knew in my heart it was never going to happen because I left the band in the early 1990s. I have never really had any expectations since then.

Do you feel any resentment towards the Guns N’Roses who are touring the world at the moment?

No, I just want to get on with what I’m doing. It’s been a long time. I’m really happy that Axl seems to be happy. He’s probably at the same place that I’m at. Whether he calls it Guns or something else I don’t care. I signed that name away a long time ago.

Apocalyptic Love is out now. Slash featuring Myles Kennedy and The Conspirators play Dublin’s Olympia on March 3rd and 4th