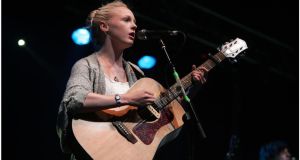 Laura Marling plays at Crawdaddy at the Electric Picnic in 2010. Photograph: Brenda Fitzsimons

When it comes to open-air music festival shenanigans in the current economic climate, 10 is a big number. At this stage you’ve laid out your stall, you’ve done the spadework and people have voted yeah or nah with their feet and wallets.

Get to 10 and you’re established. You’ve survived slings, arrows, recessionary ill-winds and food poisoning from that dodgy burger stall from a few years ago. It’s telling that very few Irish festivals of comparative size have made it to double figures and maintained their bona fides (just look at the woe-be-gone Oxegen, for instance).

But the Electric Picnic, that weird, wired and wonderful arts and music carnival of the bizarre, bemusing and beautiful, has done so. When Electric Picnic founder John Reynolds shook hands with Thomas Cosby to strike a deal to use Stradbally Hall for a one-day festival at the end of the summer of 2004, neither man could have predicted what was to come.

The most memorable thing about that first year was that it was a fierce hot day and there were long queues for the bars.

In 2005, the zeitgeist came crashing to earth in a field in Co Laois. That year the picnic provided highlights which still burn bright in the memory banks. Arcade Fire played out of their skins in the big tent and put in one of the shows of their career. It’s an event which is now Irish music’s GPO 1916, with more people claiming to have been there than could have possibly fitted in the big tent.

Since then the picnic has established itself year after year as the leader of the pack when it came to festivals in Ireland. In 2006 you’d Pet Shop Boys, Basement Jaxx and New Order stealing the show.

The following year the Daily Ticket made its first appearance and the Beastie Boys put on a thumping show.

Grace Jones provided the big wow in 2008, while 2009 was the year of Chic making their Irish debut and turning the Electric Arena into the biggest, loudest, most glammy disco in Co Laois.

We’ll remember 2010 as the year we saw the late, great Gil Scott-Heron, while Janelle Monae showed her smarts with two shows on the first night. In 2011, it was Santigold’s mesmeric funk in the big tent and PJ Harvey’s spooky folk on the main stage which dominated.

Last year? Well, last year’s highlights were provided by Orbital and the Roots, with Gavin Friday taking the rosette for the worst main stage appearance ever.

But those are just the headlines from the despatches. Our Picnic memories all blur into one giant, giddy, gleeful, gregarious mush of stuff. Catching the likes of Laura Marling and Lisa Hannigan on tiny stages, the stuff that goes bump-bump-bumpity-bump after midnight on Saturday night in the woods, the parallel universe that is the Body & Soul area, the brilliance of an unplanned and unlisted disco in a yoga tent, brain food to store for the winter months from the assorted gatherings in the Mindfield area, enlightened conversations with randomers: you could probably draw up your own list along similar lines.

Over 10 outings, the Electric Picnic has become an essential part of Irish cultural life. Other fests may attract more people – the Fleadh in Derry drew 10 times as many, for instance – and others may be more bespoke in their bookings – come on down Longitude, this year’s most impressive new arrival – but the picnic has the X, Y and Z factors.

It’s the big one on the calender for many and you can understand why. So, 10 more picnics? Sure, why not?