The relationship between words and movement in Enda Walsh’s new play, in which two weirdly innocent men are trapped in an endless knockabout farce, is more seamless than in any Irish dramatist since Beckett 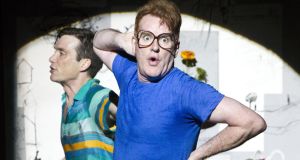 So Jean-Paul Sartre, Samuel Beckett and Flann O’Brien are jointly commissioned to write a sketch for The Morecambe & Wise Show. Over a bottle of absinthe they concoct something like Enda Walsh’s Ballyturk. It has elements of Sartre’s No Exit, Beckett’s Waiting for Godot and O’Brien’s The Third Policeman. But it’s also pure Eric and Ernie: two weirdly innocent men who share a bed but are not lovers, trapped in an endless knockabout farce, putting on “a play what I wrote”.

The result is strange and funny and manic and very, very dark. It is tempting to say that there is nothing quite like it – except, of course, that most of Walsh’s work is quite like it. Which makes Ballyturk a somewhat disconcerting experience: thrilling in its vivid immediacy but just a little dispiriting in its crushing pessimism.

Writers tend to be divisible into explorers who range restlessly and excavators who sift endlessly through the same patch of soil. Walsh is the most extreme excavator in the Irish theatre. It is not just that his plays tend to repeat the same patterns. It is that the patterns they repeat are themselves endless repetitions. He gives us people who are locked into stories they can neither escape nor end.

It is not accidental that Walsh wrote a brilliant play about the myth of Penelope, who weaves a shroud by day and unravels it by night. That’s pretty much what Walsh himself does, weaving and unweaving the same metal cloth.

Thus Ballyturk revisits Walsh’s last collaboration with Cillian Murphy and Mikel Murfi, Misterman, produced at Galway Arts Festival in 2011, which itself revisited the original 1999 version of the same play. There, Murphy’s isolated character lived in a world of voices that he shaped into the town of Inishfree. Here, Murphy is joined by Murfi onstage and, in contrast to his roaming Misterman persona, closed into a room. But, again, the primary action is the evocation through voices of a fictional town, Ballyturk. The population is similar enough: the shopkeeper, the gossip, the furtive lovers, the ne’er-do-well. This playing out of a repeated scenario, meanwhile, is itself essentially a repeat of another remarkable Walsh play, The Walworth Farce.

These repetitions are not dull; they’re just the way Walsh’s imagination operates. If he were a composer he’d be a minimalist. If he were a poet he would write in deliberately restrictive forms such as the sonnet. He seems to need the rigidity of a confined space and a fixed set of repeating patterns: even in film, it does not seem accidental that the H-blocks of the repeated hunger strikes (Hunger) or the intensely internal world of online relationships (Chatroom) suit his aesthetic.

What matters is the energy he brings to rattling the cages he makes for himself – and it is a phenomenal, overpowering force. The manic quality of much of Ballyturk – the hyped-up physical and mental effort that the two locked-in men have to expend to keep themselves alive – is channelled into an often breathtaking theatricality. Theatre thrives on pressure, and here the pressure gauge is high into the red. Murphy and Murfi are in constant motion because, like sharks, they must move or die. Walsh’s great strength is that he writes this motion. There is a relationship between words and movement (he directs his own play) more seamless than in any Irish dramatist since Beckett. There is no discernible divide between script and performance: language and movement are honed into a single point of attack.

In some ways, watching Ballyturk is more like being at a boxing match than attending a well-behaved play – but without a break between rounds. Walsh’s choreography would indeed be worthy of Eric and Ernie – no mean compliment. One of its pleasures is that it allows Murfi to remind us what a great clown he has always been.

The sheer vitality of these performances, allied to Stephen Rea’s laconic and enigmatic allure as the sinister deus ex machina who enters and controls the enclosed world, makes Ballyturk essential viewing. But it does not entirely blow away certain hesitations. One is that, to me at least, the manic energy makes the slower, more melancholic or lyrical moments that are crucial to the play more difficult and problematic. It matters enormously that the viewer is deeply moved by a longer speech of Murphy’s towards the end; I found the shift of tone and tempo hard to assimilate.

Another is that the fictional towns are locked away from any sense of what has happened in Ireland in the past 20 or even 30 years. That may be part of Walsh’s point, but it nonetheless creates a strangely static frame of reference.

The last is that Ballyturk really is astonishingly bleak, with a final coup de theatre that kicks any incipient sense of possibility in the teeth. It plays out the logic of the only alternatives that Walsh seems to admit: either die or play out the same arid rituals over again. It’s a pointed contrast to, for example, Tom Murphy’s Bailegangaire, in which the same idea of a repeated story is driven towards resolution. Walsh’s brilliance earns him the right not to do resolutions, but audiences retain the right to wish for them.

The pandemic has split us into two distinct camps: The Couples vs The Singles

Mary McAleese: ‘As a family, we were just devastated’
7