From the get-go, Cork County Hall was designed to reflect the spirit of the age – this was architecture as both an agent and a symbol of civil and political change 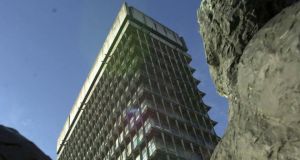 As Cork County Hall soared more than 60m into the sky, the bombast of its rectangular bulk and grey concrete cladding gradually diminished.

The pair of figures in Two Working Men, a bronze by the sculptor Oisin Kelly, stared up at Munster’s first skyscraper. The taller, thinner man and his squat companion, their bodies straining in disbelief, gazed in apparent admiration at their county council’s new headquarters. For this building was a radical architectural response to the brashness of 1960s Ireland.

At 15 storeys, plus a rooftop pavilion and viewing terrace, Cork County Hall belonged to an elite club of tall Irish buildings. Indeed, from its official opening, in 1968, until 2008 it was Ireland’s tallest. In the past decade the building has been significantly altered (in a revamp, by Shay Cleary Architects, completed in 2006), and although it retains a similar profile on the skyline, its concrete cladding has been replaced by state-of-the-art glazing, and the tower is now joined by a 21st-century atrium.

With each generation come perceived new needs, and when the local authority in Co Cork was planning a headquarters in the mid-1960s it primarily sought to replace its scattering of offices around Cork city. The language was all about obsolescence and the potential of a greenfield site, of automobile access and of vertical circulation.

The county architect, Patrick McSweeney, decided that the solution was a tower that stacked the multiple functions of vocational education committee, health authority, and rural-development and agricultural committees, rising from a modernist romance of greenery 3km outside the city.

Cork County Hall was a highly symbolic, adventurous project from the outset, underpinned by the spirit of its age and the prospect of its function: modernising local government in a modernising Ireland. Here architecture was projected as an agent of civic and political change. As McSweeney put it, the building would promote “the kind of confidence and enthusiasm that is an essential part of a developing community” .

Both inside and out, the building’s modernism was softened by textured surfaces and decorative elements. Much of this formalism, from the remarkable, elegant concrete tracery on the outside of the tower – whose removal during the revamp caused a controversy – to the exposed-brick walls, blockwork floors and chevron-patterned fibrous-plaster ceilings on the inside, points to Cork County Hall as typical midcentury modernism. (Architecture in the 1950s and early 1960s sought to harness technology and prioritise functionalism while referencing regional tastes.)

Reception desks were placed on every floor to direct visitors, and children were advised to visit and learn about the machinery of government. This was a new monumental and somehow permeable civic architecture.

Cork County Hall’s dominant aspect was its towering height in an otherwise low-built environment. Tall buildings were a source of anxiety in 1960s urban Ireland. In the Dáil politicians discussed their merits in the face of a housing crisis, culminating in the contemporaneous partly high-rise Ballymun housing development, in north Dublin. Tall buildings were perceived by many as either “crisis architecture” or wasteful alien solutions for corporate or semi-State bodies.

Indeed, it is height, in all its connotations, that Kelly’s enduring sculpture addressed. Originally made for Liberty Hall, the 59m tower in Dublin, the bronze was condemned as a traffic hazard, and permission was refused. Dublin’s public-art loss was Cork’s gain, as the two figures were taken to a small park opposite McSweeney’s tower.

Known locally as Cha and Miah, the figures, in their life-size simplicity, are regarded as among Kelly’s best public work. Removed during the building’s refurbishment, Cork’s bronze Everymen are back, staring up at a less exciting but still impressive tower.

You can read more about Cork County Hall in the Royal Irish Academy’s Art and Architecture of Ireland; ria.ie