Analysis: Going to a concert will become more time-consuming and more expensive 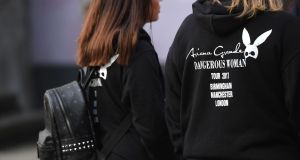 Fans of US singer Ariana Grande speak to members of the press in Mancheste. / AFP PHOTO / Paul ELLISPAUL ELLIS/AFP/Getty Images

Tighter security will be brought in for live concerts, following last night’s terrorist attack at the Ariana Grande concert at the Manchester Arena. While it remains unclear exactly where the bomber was positioned (just outside or just inside the venue) at least 22 people were killed and dozens more injured at last night’s show and many of the victims – given the US singer’s fanbase – were teenagers.

After the Bataclan massacre in Paris in November 2015, Isis released a statement that the popular music venue had been deliberately selected as music concerts, in their words, were “packed with polytheists” and were displays of “fornication and debauchery”.

Whereas previously airports and train stations were prime targets for terrorists, last night’s attack taken in conjunction with the Bataclan one, indicate that any entertainment venue which attracts a large number of people is a target.

In years past you were just patted down on the way into a live music show (and that was mainly because security checking for recording devices or bottles of alcohol) but “airport-style” security measures are now in place at the bigger music venues. Coats, jackets and bags must be removed and placed on a conveyor belt to be X-rayed.

Prior to last night’s atrocity, the main concern was about guns and knives. However, no system is perfect. A U2 concert in Stockholm in September 2015 had to be evacuated and postponed after it emerged that a man in the audience had got a gun past security.

Following the Bataclan attack, entertainment venues worldwide took a cold, hard look at their security measures. The problem here is one of scale. A venue such as the 3Arena in Dublin has the resources and manpower to provide the highest levels of airport-style security, but mid-size and small venues will have to look afresh at what they have in place.

The Manchester Arena, where the atrocity took place last night, is far bigger than the 3Arena and would have sophisticated security measures, but that still didn’t stop the bombing.

In reports this morning, concert-goers from last night’s show have criticised the security at the venue, some saying their bags were not checked on the way into the venue.

Even though, given the age make-up of an Ariana Grande audience, security would not have been looking for guns or knives, it is still surprising that some concert-goers are reporting that bags weren’t searched.

As more details of the bomber’s actions become clear, promoters will form a clearer idea of what happened and what measures can be put in place to prevent a repeat of the carnage.

Because venue security is so site-specific and nobody wants to publicly detail what precise security measures they have in place, there is a necessary element of secrecy.

Following the Bataclan attack, the world’s two biggest concert promoters, Live Nation and AEG both stated they had implemented heightened security procedures in all their venues around the world but, as the statement from Live Nation read, “because of the sensitive nature of of these protocols, we cannot elaborate further on the specific details”.

A lot of concert security is hidden. The person standing beside you at the show may not be a fellow fan but a trained security expert. Audience members can be monitored on camera walking up to a venue.

Hiring more security guards, installing better technology, bringing in metal detectors and specially trained dogs is expensive for a venue. Ticket prices are already at an all-time high so one only certainty from last night’s attack is that going to a live music show will become that bit more time-consuming getting into the venue and that bit more expensive for the ticket itself.

The only practical advice for any Irish gig-goer going out to enjoy a music show over the next while is to immediately report any suspicious behaviour to the venue’s security detail.