Is ‘sorry’ the hardest word? It’s certainly one of the most flexible

When they are used appropriately and with the right motivations, apologies can be a powerful healer 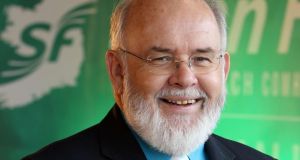 Francie Molloy of Sinn Féin: The Westminster MP apologised for a tweet about the party and sexual abuse allegations

It has become almost de rigueur for people involved in public controversies nowadays to demand public apologies from people they regard as having committed crimes against the community, and these are usually crimes incapable of being criminally prosecuted. What typically follows is that many of the accused either refuse on various grounds, or offer ersatz apologies that often succeed only in making things worse.

Bankers interrogated recently at the banking inquiry were among the refuseniks. Recent practitioners of the kind of apology that makes things worse have included the Sinn Féin Westminster MP Francie Molloy, who apologised for an unguarded tweet about the controversy involving his party and allegations of sexual abuse; and the Israeli prime minister’s manifestly insincere apology for insulting many of his Arab fellow-countrymen during the recent election.

What many people might call an apology can, depending on the circumstances, be many things, not all of them praiseworthy. It can be an attempt to deflect criticism; it can be a thinly veiled attempt to strike back at an accuser; it can be a self-serving attempt at justification; or it can be a meaningless gesture, as in the case of politicians apologising grandiloquently for offences they never committed, and for which they were simply not responsible (although other people may well have been).

What it rarely signifies is what the word means and what it should always be: an honest attempt to repair a human relationship that has been damaged by error, carelessness, thoughtlessness, or even a misunderstanding.

The Scottish Public Services Ombudsman’s guidance on apologies suggests that “a meaningful apology can help both sides calm their emotions and move on to put things right. It is often the first step to repairing a damaged relationship. It can help to restore dignity and trust. It says that both sides share values about appropriate behaviour towards each other and that the offending side has regrets when they do not behave in line with those values.”

It also emphasises that a meaningful apology must accept what you have done wrong, by naming the offence you have caused; accept responsibility; explain why it happened (unless you have no explanation, and therefore no excuse); show that you are sincerely sorry; and, if possible, make amends.

It is in a sense easier to say what an apology should not be than what it should contain, because the circumstances in which apologies are appropriate are always varied. An apology that fails to meet the needs of the situation generally suffers from one or more of the following inadequacies: it is offered late; it is qualified by an ill-concealed attempt to justify the behaviour or words that gave rise to the offence; it confines itself to an expression of “regret”, which is a necessary, but not sufficient, condition for a genuine apology; or it limits the apology. This implies either that no offence worthy of an apology has, in the view of the writer, been given, or that the person who has been offended is too thin-skinned for his complaint to be worthy of any serious consideration.

It is of course an honest response for someone who believes that what he or she said was correct to decline to apologise. In such cases everyone who is aware of the circumstances may determine for themselves who is right and who is wrong.

But two other aspects of such a situation may also be relevant. One is that an apology, even when offered in circumstances in which the person who has been challenged believes that they have a substantial amount of right on their side and that their challenger may be oversensitive, has the potential to become a win-win situation. A major repair job can be carried out on a damaged relationship, and both parties can be seen publicly to have acted honourably and even generously.

The second is the converse of this. This is the situation where an apology has been extracted at gunpoint or, more usually, following the threat or the instigation of legal proceedings. This is a lose-lose situation, characterised neither by contrition nor a meeting of minds, but by the creation of a permanent relationship of bitterness and mutual hostility as the inevitable outcome of a naked power struggle.

In this context it is worth noting that the 2009 Defamation Act, whatever its shortcomings (and there are some) has created a new situation in which a prompt, unforced apology by a newspaper or broadcasting station, instead of being a costly admission of liability, has at least the potential to short-circuit lengthy, expensive, and risky judicial proceedings.

It is also interesting that in one of the few cases to come before the courts following the passage of the 2009 Act – it involved a defamation claim for which damages were not being sought – the judge concerned did not force the offending newspaper to publish an apology. He simply required it to publish his decision with the same prominence as it had published the offending article.

The view has been sometimes expressed that the Irish Press Ombudsman and the Press Council should be able to enforce apologies.

Speaking for myself, I would never have accepted such a power, even in the unlikely event that it were offered, not least because I believe it would do little to improve the sometimes-fragile relationship between newspapers and readers, and indeed might make things worse. But apologies, given in serious situations, and not casually as a brush-off, or patently insincere or inadequate, have the potential to make things better.

Cancel culture: can you defend people who say unpopular things?
2