Is humour an effective way of communicating wisdom?

Shared, unspoken knowledge is always the active ingredient in ‘getting the joke’ 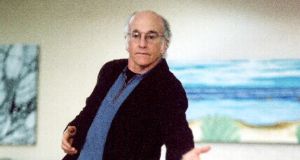 Larry David in ‘Curb Your Enthusiasm’: the ‘cringe comedy’ premiered in 2000

Ludwig Wittgenstein is reputed to have said that a good philosophical work could be written entirely of jokes but by praising humour he was in a minority among so-called serious thinkers.

Plato saw laughter as a kind of vice as it provoked a “violent reaction” in one’s condition. Laughing at others was especially heinous, in Plato’s book, as it conveyed an unspoken ignorance of one’s own faults.

Immanuel Kant saw laughter as “an affection arising from the sudden transformation of a strained expectation into nothing”, and as such it had nothing positive to offer.

Prof Eric Weitz of the department of drama at Trinity College Dublin begs to differ. A joke can contain wisdom, he says, and at the very least it must contain knowledge. “Shared, unspoken knowledge is always the active ingredient in ‘getting the joke’ and the in-group bonding it mobilises,” he writes in his book Theatre and Laughter.

Prof Weitz is a board member of the International Society for Humour Studies, which held its annual conference this year at TCD. Summarising his thoughts for Unthinkable, he says: “Humour infers an access to other ways of ‘making sense’ as well as an ability to sidestep the high beams of life bearing down on you.”

Can a joke convey knowledge or wisdom? Prof Weitz: “If you’re looking for jokes to convey some kind of irrefutable, timeless truth, you’ll be disappointed, because part of the premise of verbal joking is that there is no such thing as a single, valid perspective. It generally shows us that a thought or idea or contention or commonly held assumption can be revealed as ludicrously vulnerable to an alternative flash of sense-making.

“That said, any joke asks you to endorse through laughter its particular knowledge or wisdom and its evaluative edge, so if it clicks for you there can be a sense of something feeling ‘especially true’. Homer [Simpson] says, ‘It’s funny ’cause it’s true’, because of a joke’s effect of quick-hit subjective recognition, not objective verification.”

Does political humour have a different complexion to other types of humour? There is a sense in which jokes that make a serious political point are funnier initially than they are in retrospect. “Political jokes are not structurally different from other types of humour, they are just loaded with more flammable material. All jokes have some kind of target, something that you’re meant to be laughing ‘at’, even if it is something as incontestable as the inefficiencies of language, or perceived as incontestable, like the venality of lawyers.

“If there is a general sense in which jokes that make political points are funnier initially than in retrospect, I would propose it’s down to two general factors.

“First, humour loves the up-to-the-minute or topical reference, that first instance you discover that something you think or feel is a ‘thing’...

“Second, I would contend that we laugh most forcefully with regard to things we feel strongly about.

“This for many of us would include political issues... As time goes by after a political joke’s first airing it can lose its force because it no longer represents a fresh critique or because intervening events have changed the playing field, sometimes drastically.”

On the question of violence for amusement, what does it say about you if you laugh at other people’s misfortune? “I don’t know, it may well say that you’re human.

“Humour theorists might say it’s some part relief that it’s not happening to you, and another part feelings of superiority or validation over the person it happens to, and if you’re talking about a physical mishap it can involve the person’s sudden and spectacular loss of dignity.

“Often, who it is will have some bearing, so that we relish it more if the victim is somehow receiving comeuppance or is otherwise being taken down a peg.

“I think a new strain of that effect came by way of TV shows like The Office and Curb Your Enthusiasm in the early 2000s, what some people call ‘cringe comedy’. It really kind of picks at the scabs of our social interaction.

“There is, of course, the famous Mel Brooks quote: ‘Tragedy is when I cut my finger. Comedy is when you fall into an open sewer and die’.

“This response is courted to a potentially troubling extent in the age of YouTube and social media sharing, because you will see candid footage of people actually getting hurt, posted for the amusement of online viewers – and clearly receiving the desired response as well as objections.”

There is a rich tradition among Irish writers of approaching serious topics with humour. Does this reflect an intellectual maturity in Irish literature, or an inability to tackle issues head on? “Well, I would say the first one, because I’m partial to the proposition that a truth told by humorous means is potentially a deeper truth.

“If by ‘tackling issues head on’, you mean by rational articulation and serious argument you are limited by definition in a way that a thousand irrational ways of making a point are not.

“There is still a bizarre prejudice that presumes anything involving laughter must somehow remain tainted by frivolity or otherwise be that bit suspect in the eyes of clear-thinking authority. Humour is an extremely potent mode of communication, and I’ll take it unapologetically as part of critical thought and feeling at its best.”