‘This star is dedicated to the people of Derry... dreams do come true’ she says 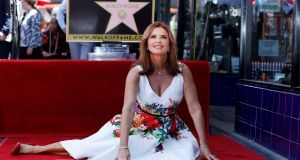 Actress Roma Downey poses on her star after it was unveiled on the Hollywood Walk of Fame in Los Angeles, California Photograph: Mario Anzuoni/Reuters

Irish actress Roma Downey has been honoured in Hollywood’s Walk of Fame with a star.

The Derry born producer, best known for her role in “Touched by an Angel”, received the star in recognition of her distinguished career at the famous landmark in Los Angeles on Thursday.

The Golden Globe and Emmy-nominated actress (56), spoke at the ceremony on Hollywood’s Boulevard, which was being live streamed, that it was a great day for Irish.

“This star is dedicated to the people of Derry and anyone who ever walked this boulevard with a dream – here I am today to say loud and clear dreams do come true,” she said.

Her terrazzo star, which is the 2,586th one, joins a long list of best known actors including Marilyn Monroe, John Wayne, Greta Garbo, Julie Andrews and Humphrey Bogart.

Downey’s star has been placed next to her husband’s star, Mark Burnett, who known for reality TV shows such as NBC’s “The Voice” and CBS’s “Survivor”.

The actress first came to fame playing the title character Monica on TV show “Touched by an Angel”.

She has been listed as one of Variety magazine’s “100 most powerful women in Europe”.

Downey is executive producer on film “ Ben Hur”, which opens in cinemas on August 19th.

“ She has been a force in the business of entertainment, both as an actress and talented producer,” he said.

A donation of €26,900 ($30,000) is required to receive the award, and the money is used to install the star and maintenance of the sidewalk.