Ireland in photographs: the Uncertain State we’re in 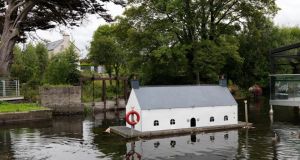 David Farrell’s Clare, from An Archaelogy of the Present, part of the exhibition Uncertain State at the Gallery of Photography, Dublin 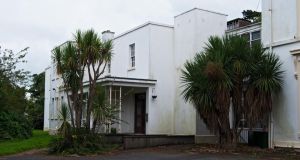 From Asylum Archive’s series Direct Provision Hostels in the exhibition An Uncertain State at the Gallery of Photography, Dublin 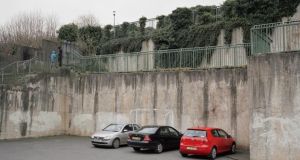 Overpass, from Paddy Kelly’s photographs of former IRA training sites in his series Bogland, from the exhibition An Uncertain State at the Gallery of Photography, Dublin

These days, everyone is a photographer. Digital imaging technology, the internet and social media have hyper-accelerated a tendency towards convenience and affordability, a progression that has characterised photography since its invention in the mid-19th century.

Anyone with a mobile phone can shoot hundreds of images, not to mention video clips, in the space of a couple of hours and have them posted instantly online, something that would have seemed not only impossible but quite incredible not that long ago. A limitless ocean of onscreen imagery is now part and parcel of our environment.

Is this an example of the democratising effect touted by proponents of the World Wide Web? Yes and no. Photography may be the medium, but the medium shouldn’t be the message. To parallel its ubiquity as a medium, more than ever we need a critical sense of photography, and that imperative, rather than simply cheer-leading, is at the heart of PhotoIreland 2013, this year’s instalment of the annual photographic festival spread across Dublin, Cork and Limerick. This critical spirit is exemplified in the Gallery of Photography’s keynote exhibition Uncertain State. Curated by Trish Lambe, the show marshals the work of 10 photographic artists who address “the crisis in Ireland” in different ways.

None of them takes reportage photographs as such. Each sets out to explore a particular set of facts and issues in a sustained, analytical way, to use photography rather than to make conventional photographs.

The range is considerable. Straightforwardly, David Farrell’s An Archaeology of the Present consists of large-scale images charting a journey through Ireland after the economic calamity. He finds – you guessed it – half-finished suburban estates incongruously parachuted into rural terrain, abandoned, unfinished hotels and other topographical oddities. There’s a surreal strangeness to the Celtic Tiger world that comes vividly across in, for example, his cinematic image of a pristine, incomplete estate in Kinlough, Co Sligo.

Eoin Ó Conaill and Paddy Kelly also tackle the contemporary Irish landscape, though in more nuanced, indirect ways. In Reprieve, the former depicts a succession of greenfield sites earmarked for development, with some preliminary work done, planning permission lapsed, now left to be reclaimed by nature. They look not quite right, disordered, but one wouldn’t know what on earth had been going on.

Equally, Kelly’s urban and rural scenes in Bogland look remote and slightly forbidding, but also quite ordinary. What links them is that the locations served as training camps for the IRA during the 1970s. As he sees it, the “objective truth” of the photograph always contains a subterranean history known to some, often closely guarded, but passed along orally.

Hidden histories
This notion of hidden histories is starkly illustrated in a remarkable series by Kim Haughton. Titled In Plain Sight, it delves into another disturbing strand of recent Irish history. Haughton collaborated with victims – exceptionally brave people, it must be said – of child sexual abuse. Individual portraits are paired with views of the places where the abuse took place, ordinary, innocuous looking places, usually.

It’s tough, troubling work but, as Haughton says: “Denial and secrecy provide opportunities for perpetrators to continue to sexually abuse children . . . The strength and openness of the people who have collaborated in this process is a brave act of public testimony. It represents a direct challenge to the culture of secrecy and suppression of child abuse in Ireland, asking the viewer to openly acknowledge the reality of these painful histories.”

Úna Spain’s documentation of St Brigid’s psychiatric hospital in Ballinasloe looks to its former Victorian incarnation. Her forensic studies of the unclaimed possessions of former residents, “the forgotten other”, are desperately sad. She notes how place names can become associated with asylums. Such was the status of St Brigid’s in the West the vernacular phrase, “Cuireach sé soir thú” (literally “it would put you east”) was understood to mean, “It would drive you mad”.

Emigration and immigration are both current in Ireland. In Direct Provision Centres, Asylum Archive tackle the harsh reality faced by asylum seekers in the country. In existence since the turn of the century, Direct Provision Centres function as spaces apart or, as the archive puts it bluntly, ghettoes. That is, the 35 “hostels” stand apart from normal life. “The rest of society is not concerned about their existence.”

Adult asylum seekers receive €19.10 per week. In the exhibition the archive documents some of the residential centres. Again, they are contemporary urban landscapes whose meaning, in the absence of knowledge or further explanation, remains hidden.

Paul Nulty’s mother is a returned immigrant, and his account of her uneasy resettling conveys the problematic nature of place, community and belonging in the new, anonymous, suburbanised Ireland. A feeling of discomfort is palpable in his account of an individual in her world.

“Her plan to return had been discussed for decades”, but the reality is inevitably disconcerting. As she says: “I do feel different than other Irish people – I definitely do and I can’t understand it.”

Lauren McGookin uses photography to explore the loyalist culture of her own community, a culture in which she lives but which is at the same time strange to her.

Pete Smith shows us what a sense of continuity of community feels like in his fine portrait series, A View from the Dearth, which began in 1988 as a project to document his local Killinarden community on a council housing estate. Revisiting the project 21 years later, he notices the absence of many of the people who featured originally. Some have moved on, many have died, and “the pressure of living in an area of social deprivation is still clearly visible”. In 1988 having your photograph taken “was a bit of an occasion”, in the digital age it’s “an everyday unremarkable event”.

American photographer Doug DuBois makes that experience remarkable again. Working with a group of young people in Cobh, Co Cork, over several years, he has made a terrific series of staged documentary photographs about their lives. Each image in My Last Day at Seventeen was carefully set up by the subjects themselves, with enhanced lighting, shot with a large format camera, slowing down and giving weight to the increasingly instant, thoughtless process of taking a photograph.

Trish Lambe notes that her exhibition “is not a definitive survey”, no more than the rest of the exhibitions in PhotoIreland 2013, but it does give an overview of what’s going on in contemporary Irish photography and, what’s more, it provides an indication of the potential of photography.

Uncertain State: Photography and the Crisis in Ireland is at the Gallery of Photography, Meeting House Square, Dublin, until August 11th. galleryofphotography.ie. For details of PhotoIreland 2013, see photoireland.org