Although the Ulster legend was not the figure Seán Ó Faoláin and Brian Friel painted, recent research suggests he was a military genius with a surfeit of charisma 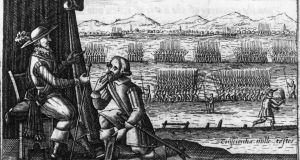 An English propaganda image from George Carleton’s A Thankfull Remembrance of Gods Mercie (1630) of O’Neill making a formal submission to the English after the suppression of his rebellion. Image: Hulton Archive/Getty 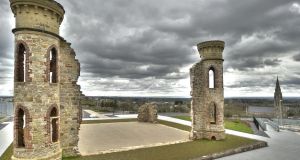 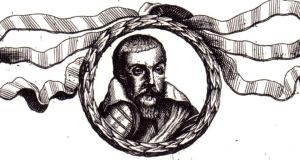 Just over 400 years ago, on July 20th, 1616, Hugh, Earl of Tyrone, the last inaugurated chief of the O’Neills, died of a fever in Rome. This was the man who defeated Queen Elizabeth’s generals in Ulster, who made a fool of the Earl of Essex leading the biggest English army ever to Ireland, who forced the crown to spend a whopping £2,000,000 in suppressing his island-wide revolt.

King James’s officials could at last breathe a sigh of relief. The Great O’Neill, or Tyrone as they called him, would not be returning with a Spanish expedition to destabilise their grand project of transforming the most Gaelic province of Ireland into its most British.

O’Neill is still remembered. But is he worth commemorating 400 years on? Does he merit the “great” accorded to him? The Mid-Ulster Council, which recently reopened the site of his castle at Dungannon as the Hill of The O’Neill and has now reconstructed the clan’s inaugural stone beside Tullyhogue Fort, certainly thinks so.

When O’Neill’s bones were being moved seven years after burial, his hands were discovered to be perfectly intact. However, there was no chance of him ever being made a saint. Those hands belonged to a well-known political pragmatist, who had ruthlessly disposed of many native coreligionists on his rise to power before taking up arms against Protestantism in the fight against England.

His military record was a better qualification. Henri IV, the king of France who had allowed the Flight of the Earls free passage through his territories in 1607, declared O’Neill one of the top generals of his day. By 1680 the Italian historian Primo Demaschino put the Irish leader in his lives of famous soldiers and included his likeness from a fresco in the Vatican.

Nationalist ideology
In 1845 the Young Irelander John Mitchel, a Protestant, downplayed O’Neill’s Catholicism and emphasised another of his claims to greatness: his nationalist ideology. He claimed that the Ulster man was “the first, for many a century to conceive and almost to realise the grand thought of creating a new Irish nation”.

However the mythologising, which began with Seán Ó Faoláin in the mid-20th century, took on a different, more negative aspect. His frequently reprinted The Great O’Neill (1942) presented an immensely influential portrayal of the earl. Mixing faulty research with simplistic revisionist notions, the Cork writer introduced a host of mistaken ideas.

These include having O’Neill brought up at court in England (when he was in fact fostered on the northern outskirts of Dublin), depicting him as caught between a modernising renaissance culture and an allegedly moribund Gaelic one (when he actually had acute facility with both, utilising them and blending them successfully) and showing him equivocating about where his loyalties lay at the start of the war (whereas in reality he was already fighting a proxy war through his relatives to win time while he himself stood aloof to confuse the state).

O’Neill had now been rendered an enigma. Ó Faoláin had bestowed another type of greatness on him, that of the heroic intellectual, which was entirely unwarranted. This attempted construction of O’Neill as an intellectual of European standing was plainly the unconscious outworkings of Ó Faoláin’s own frustrated pretensions.

Ó Faoláin even planted seeds for further artistic embellishment when he wrote: “In those last years in Rome the myth was already beginning to emerge, and a talented dramatist might write an informative, entertaining, ironical play on the theme of the living man helplessly watching his translation in the face of all the facts that had reduced him to poverty, exile and defeat.”

That dramatist was Brian Friel, whose 1987 play Making History has Archbishop Lombard writing the story of O’Neill’s life. Regrettably this play exaggerated the most egregious aspects of Ó Faoláin’s book; furthermore it put O’Neill’s marriage to Mabel Bagenal, the so-called “Helen of the Elizabethan wars”, at its centre.

Ireland at the end of the Tudor conquest needs a hero, and Lombard wants to cast O’Neill as a nation builder, to glamorise his defeat at Kinsale and his flight to the Continent, to downgrade his former loyalty to the English crown and to relegate his love affair with Mabel Bagenal to a mere “domestic story”. O’Neill protests in vain: “Don’t embalm me in pieties”. He wants a true account of his life, warts and all, with due space given to his political connection with England and his marriage with Mabel made central to his life story.

Was this was one of the great love affairs of history? Very unlikely. O’Neill’s four marriages were dynastic affairs. The third, his elopement with Mabel, had more to do with politics than romance. Hugh O’Neill was a politician to his fingertips; he spent his life trying to acquire power, trying to maintain it and trying to regain it. O’Neill had already won over the O’Donnells in a double-marriage alliance.

In this case he used his undoubted charm to inveigle a woman half his age into his confidence and to manipulate the Protestant bishop of Meath into marrying them. This was a vain attempt to win over, or at least neutralise, Sir Henry Bagenal, his rival for power in Ulster.

In spite of Ó Faoláin and Friel, and also because of them, O’Neill continues to be studied – and the recent research does point to greatness. He introduced the “military revolution” to Irish warfare, particularly with the use of firepower and field fortifications. At an operational level, he masterminded – that is the only word for it – both strategy on a grand scale and tactics in detail for seven successful years. This was coupled with a finely honed negotiating technique in which he played good cop to O’Donnell’s bad cop, which wronged-footed the English state in a stop-start war. His leadership skills enabled the establishment of an unparalleled confederacy of Irish chiefs. This unity was achieved not only by marriage alliances and fosterages backed up by the threat of force but also a charisma that enabled other Irish leaders to feel confident in him. This extended to his own followers. Unlike the Earl of Desmond, he was not betrayed when the war was lost and he was forced into hiding.

O’Neill’s real failure was his inability to win over the Catholic old English of Dublin, the Pale and other Irish towns. They stayed loyal, despite appeals to them on grounds of common religion and nationality, which the Jesuit James Archer crafted into an ideology for the Confederate cause. When that political pitch enshrined in the 22 articles of November 1599 fell flat, Archer joined Lombard in Rome to petition for the excommunication of Irish Catholics who refused to support O’Neill’s war effort. Pope Clement VIII turned down the request as he was unwilling to advance what he considered Spanish interests.

The only remaining option was direct military intervention by Spain in the Irish war. O’Neill had been working towards this eventuality since the Spanish Armada was shipwrecked in Ireland in 1588. However, their support was too little, too late and in the wrong place, Kinsale. This Spanish connection, which O’Neill hoped would be his salvation, became his undoing.

Four centuries on we can now stand on the Hill of The O’Neill, with its majestic views over Ulster, the waters of Lough Neagh stretching out below. At the height of his power, O’Neill stood there too, in a nexus of north-south, east-west and insular-continental relations. He was grappling with the same “totality of relationships” as we are today. Helping to forge the European connection might be considered as another mark of O’Neill’s greatness, but it came with a health warning: it was a connection that he had no control over.

With individual greatness also comes huge responsibilities and historic consequences. In O’Neill’s case, this was well summed up by the contemporary English historian William Camden. “He had a strong body, able to endure labour, watching and hunger: his industry was great, his soul large and fit for the weightiest business: much knowledge he had in military affairs, and a profound dissembling heart: in so much as some did prognosticate of him, that he was born either to the very great good or the great hurt of Ireland.”