How Music Works: what it took to bring back Connolly's of Leap

In How Music Works, Niall Byrne talks to Irish people who make a living in music. This week, Sam McNicholl on the return of iconic West Cork venue Connolly's of Leap 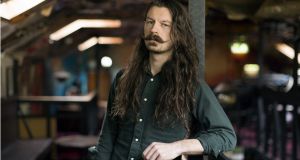 Sam McNicholl: “We put five tonnes of sand in the stage to acoustically treat it”

Sam McNicholl's life is indelibly linked to Connolly's in Leap in West Cork, a building that variably operated as a pub and music venue and in many ways, has nurtured and defined him.

“My earliest memory is hitting the floor tom with a drumstick in the venue. I had to reach up as it was taller than me,” he says.

McNicholl grew up in Connolly's, like the two generations before him. His grandparents bought what was then The Central Bar in 1952 and Sam's mother Eileen was born in the building. Music has been a constant. HIs grandfather was a ballad singer and sessions took place on weeknights. McNicholl's early life were filled with an eclectic mix of music and artists.

Connolly's built a strong reputation as a music venue and a place of hospitality, thanks to McNicholl's dad Paddy.

From Portrush, Paddy was involved with Clannad and ran a festival in Northern Ireland called the Causeway Coast. When Paddy and Eileen were expecting their first child in 1985, the pair moved from Dublin to West Cork, bought the bar and changed the name to Connolly's, as a conciliatory gesture to Eileen's parents, who McNicholl says, didn't really like his dad's hippy vibe.

A tinge of excitement
“He was a little bit colourful and was into music and the rock'n'roll lifestyle,” McNicholl laughs. “They didn't really trust him. He called the place Connolly's of Leap for them. He said to my mum, 'I'll make you proud of your name through the music'.”

Paddy, who had gotten to know the likes of John Martyn and Loudon Wainwright, began to bring bands down to play, acts such as Freddie White and Engine Alley. Paddy was a sound engineer too, and bands would stay down for a number of weeks to record.

“I would wake up in the morning, clean the bar with my brothers and sisters, make our lunch and go to school,” recounts Sam. “I'd come back and there was always a tinge of excitement about who might be in the house today or what might be happening.”

By the time McNicholl was seven, in 1997, Paddy was running 230 gigs a year and Connolly's gained a reputation on the live circuit with artists such as John Martyn, Lightning Bolt, The Pale, Something Happens, Donal Lunny and The Frames among them.

“It's all about my parents,” McNicholl says of the venue's reputation. “It's all about my mum and my dad. We didn't take holidays as kids. I don't have any memories of going on trips abroad. My parents worked really hard here and put everything they earned back into the building. My dad was a nut. The amount of money he spent on gear was mad. He really did care. I think people saw that it wasn't just a business, it was literally their heart and soul in it.”

“For a lot of artists, the first time they ever heard themselves recorded back was leaving Connolly's in the car,” says McNicholl.  “Dad worked off that philosophy of 'build it and they will come'.”

McNicholl picked up drums, by osmosis. In 2007, aged 17, he was thinking about leaving West Cork for London to study at the Academy of Contemporary Music, when his parents asked their children how they would feel if they sold the bar licence.

“My brother and my sister - I'll never forget it - they just looked at me and were like 'well, what do you think? If anyone's going to do anything with it, it's you'.”

The licence was sold and McNicholl moved to Australia. Then, dad Paddy fell ill in 2010 and passed away soon afterwards.

“He was sick but not for that long,” says McNicholl. “He just went after four or five months - like a drummer -  right on time.”

Resecuring a licence
McNicholl moved home and decided in 2012 that Connolly's needed to be reopen as a venue again but there were a lot of things to do beforehand.

On Friday, December 18th, the venue will officially reopen with a run of ten shows featuring Donal Dineen, Talos, Stevie G, The Altered Hours, Daithí and Ajo Arkestra. There have been many obstacles to overcome in the meantime, not least, securing a licence.

“In Ireland, if you have a seven-day bar licence, and you sell it, after five years you can never relicense that place again,” says McNicholl. “We had to go about getting a theatre licence. Then came meeting the criteria for fire-safety regulations. I just did a bouncer security course last week as I need to have a certified bouncer on the door. There is a lot of paperwork.”

The narrow venue was itself renovated with new furniture, fire alarms and new flooring to support the balconies. Like his dad before him, McNicholl is keen on getting the best sound in the room.

“We put five tonnes of sand in the stage to acoustically treat it,” he says. “It can take a lot of bass which means no hum off the stage.”

Connolly's has a special appeal to many people who grew up in Cork, and the reaction to the reopening has been filled with nostalgia for many a great night and the possibility of more to come. McNicholl, just like his dad, wants the venue to be as eclectic as possible.

“We've had Primordial down here playing and the following weekend, Radio Na Gaeltachta would be doing sean-nós sessions, broadcasting live,” he says. “It was a conveyer belt of different types of people. Dad was a lover of musicians making music, he wasn't genre-specific and we're going to try to take some of that back.”

“It was actually harder for me to not have people here,” says McNicholl excitedly. “It feels like the most natural thing to me, to have a large group of people over. I'm working off my parents' idea of 'build it and they will come.'”