In How Music Works, Niall Byrne talks to those who make a living in the Irish music industry, who shape the musical landscape and who build up the country’s musical reputation, at home and abroad. This week artist manager, label boss and booker Lyndon Stephens. 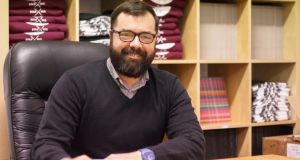 Lyndon Stephens:“I think there are very few roles within music that I haven’t occupied, which has been really useful"

When you're young music can be a saviour, a bridge to a wider world and an aspirational thing. For Lyndon Stephens, who was raised in Glengormley, North Belfast, the local record shops and its vinyl contents, with its seductive cover art, hinted at the glamour not present in his immediate vicinity. It captured his attention.

These days, Stephens is a manager for acts such as Ciaran Lavery, Oneknown, Contour, Ryan Vail and Túcan. He runs two labels; one for electronic music called Champion Sound Recordings and another, just launched, for more varied “left of mainstream” music called Quiet Arch. In addition, Stephens books acts for festivals and events and has a media company side of the business which incorporates video, training and marketing.

The adjective 'glamorous' is something that probably can't be ascribed to Stephens' daily work but hard work is its own reward too.

Stephens says his multifarious workload never really stops and a typical day tends to all of the above. “I usually do artist management stuff in the mornings, label stuff in the afternoon and then events/bookings in the 5-7pm period,” he explains. On top of that, there are weekends spent at gigs, one night a week spent teaching music industry startups and during the summer, there's a festival nearly every weekend to attend in some capacity. “I have a very understanding partner Lisa,” Stephens says of his work/life balance. “I don’t know what I’d do without her.”

Second Summer Of Love
Stephens studied Media Studies and English at University and initially wanted to be a journalist. Early experience in DJing and club promotion lead to a summer in London in the late 1980s that coincided with the so-called second Summer Of Love, when rave exploded. “It just grabbed me in terms of how exciting club culture could be,” he remembers.

The hard work ethos was instilled in him by a stalwart on the Northern Irish music scene, Stuart Bailie, who gave him a role as a club correspondent for the Oh Yeah Centre website. “I have him to thank for my introduction to the professional side of the business and not the cowboy side,” Stephens declares before wryly adding “nowadays though, I’ve been around it all enough to know that the two are actually the same.”

In 2000, Stephens started recruiting local Irish DJs and producers to apply for the Red Bull Music Academy, an annual event that works like a travelling global summer camp where participants create music in a intense two week studio scholarship with visiting lecturers drawn from revered names in the music world. RBMA, as it's known, has been held up as an example of how a brand involvement in music can be a positive thing.

“Some brand engagement with music is a joke,” Stephens observes. “I’m not naming any names though in case they ask me to fix it at some point.”

Stephens then set up his music management company, CS Management, Media & Events in 2011 and sat on the board of NIMIC (The Northern Ireland Music Industry Commission) and was the Chair of the Marketing Sub Group Committee at Belfast City Council's Festivals Forum.

Many roles
The varied positions he's held has been a great benefit to him as a manager. “I think there are very few roles within music that I haven’t occupied, which has been really useful in terms of managing artists and understanding everyone's point of view.”

Champion Sound Recordings, the electronic label founded in 2010, grew naturally out of the management company and an early release from Unknown (now Oneknown) received encouraging response, selling out its first run of 500 12” copies and being licensed for John Talabot's !K7 DJ-Kicks mix album.

Not everything went according to plan at the start though. Some schoolboy errors included putting Ryan Vail's first EP up on iTunes without any promotional push and expecting it to sell.  “Another was having an artist called Unknown and having the tracks named #001-004,” Stephens recalls of the sold-out release.

“It was a really successful EP,” he says. “but it was really marred by being totally invisible to any searches on Google or in shops.” On a practical business level, the name lead to lack of radio play revenue. “I mean, who is going to get paid for Artist: Unknown track: #001 if someone plays it on the radio in Poland?” laughs Stephens.

Management nous
The experience and learning curve in starting a label meant acquiring skills in different facets including social media marketing and video production. Stephens also studied for a year and gained a Diploma in MMBE (Managing a Music Business Enterprise) and a Diploma in Strategy in Business. Those skills added another branch to Stephens' services and the company now “sells these outward” including work with events such as Cathedral Quarter Arts Festival, Culture Night and Culturetech in Derry, .

“One of the keys to surviving in today's music business is to have lots of streams of income as most of them are pretty small,” Stephens says of his diverse services.

Speaking of small streams of income, starting a label in 2015, as Stephens has done with Quiet Arch may seem like a fool's errand but he has high hopes for the project and cites the success of the hotly-tipped Antrim singer-songwriter Ciaran Lavery as an example of why.

“Lavery's songs have 12 million streams on Spotify with one million streams being added every month,” Stephens observes. “This creates demand for him in other territories and he's already been booked for the USA, Belgium, Germany and mainland UK before he has had a huge profile at home.”

Lavery will be involved in the first release on Quiet Arch, a mini-album collaboration between the songwriter and the Derry producer Ryan Vail, under the name Sea Legs. Two more releases will follow this year including Túcan's new album Towers and a re-release of SlowPlaceLikeHome's album Romola, which is released independently last year.

Clean slate
“I really have high hopes for this and want to steer it into a real force in Irish music overseas,” Stephens says of his new label imprint. “It's my chance to start again with a clean slate and have a go at running a label from scratch knowing all the things we did wrong first time around.”

Stephens sees further opportunity at home, in cross-pollination between film, digital and music. “It seems these worlds are oblivious to each other,” he suggests. He also speaks of an “an invisible barrier” between the big cities in the north and south of Ireland. ”I'm still surprised at how people in Dublin or Belfast know more about what's going on in London than in the other city two hours away.”

Practically, Stephens is involved in a collective of Northern Irish music managers who meet once a month to help each other out and thinks that model could bring managers on both sides of the border closer. “We’d definitely be interested in hearing from any Southern managers who'd like to meet up.”

Stephens may not have the glamorous life he glimpsed on album covers as a young lad but through management and labels, his strong association with music clearly remains as he remembers fondly the day he received the first two Champion Sound Recordings vinyl records and brought them home to listen.

“l had this great feeling that I'd moved around to another side of things in a karmic sort of way. We were sending out things into the world that up until that point had only ever entered my world from outside and had brought me great pleasure throughout my life.”