Hollie McNish: ‘Being a parent is very much political’ 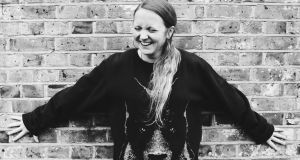 “I get called slag, bitch, lesbian, whore, ugly, but as a girl you get those comments from about the age of 11”

English poet Hollie McNish might well be the perfect role model for persistence. Although she can’t precisely recall what made her want to be a poet, she can define her years and years of writing words that rhyme purely in terms of enjoyment.

“There’s no other reason, really, that I can think of,” she says, from a room in her father’s house outside Reading. Her six-year-old daughter is watching breakfast-time TV before school starts, so it’s clear McNish likes to use her time efficiently. “I was never persisting in order to become a writer or to have it as a career. I was working in planning, so that kept me busy, but I had always enjoyed writing lots and lots of poetry. It was other people who asked me if I had ever thought of reading it out at open-mic nights or sharing it with other people.

“If that’s persistence, then yes, but it was simply a hobby that I enjoyed doing. But then I noticed that people were enjoying the gigs, and they always asked me if had any more poems. Then it snowballed.”

That’s one way of putting it. McNish started the open mic slots almost 10 years ago, initially in London before criss-crossing England. By 2009 she was UK Slam Poetry champion, and came third in the World Poetry Slam finals. Now 33, she has been a full-time poet for several years, and her YouTube video clips have had more than four million views. So much for not wanting to make a career out of it.

“That’s still a bit of a shock, and not something I’d imagined would have happened. I had a rule back at the start that I’d only do a gig if someone asked me. The first open-mic gig was done to please the people who kept asking me to do them. So my mates stopped asking me, but then other people I didn’t know approached me, and it just grew from there. When my daughter was two, I decided to give up my day job because it just got too much, between working and doing gigs.”

Writing politically charged, insightful, amusing poetry, unwittingly causing a stir by breastfeeding her daughter in public, juggling the time constraints of parenting with making a living in a notoriously capricious industry, dealing with less than gracious below-the-line comments on her YouTube videos – although being a poet is indicative of a level of engagement, it was only when McNish became a mother that she became fully aware of how political an undertaking it is.

“What with topics such as parental leave and the ideas of where children are welcome in public spaces, and so on, being a parent is very much political – especially when you travel to other countries and see how family-friendly they are compared to the UK. Most things that affect me in life are down to politics, and government decisions allowing or not allowing certain things, so of course I react to these.”

And to the comments she reads under her various social-media outlets? Detonate or disregard? “At first, they made me upset and then slightly scared, but I came to the realisation that they’re just written by people hiding behind computers. I get called slag, bitch, lesbian, whore, ugly, but as a girl you get those sorts of comments from the age of about 11. So comments like these I just don’t care about any more.”

She says she learns from some of the comments. Following the online sharing (more than 1,380,000 views and counting) of her poem Embarrassed, which is about breastfeeding her daughter in a public toilet rather than in a more comfortable public space, there was, say McNish, “a lot of weird negativity about it. But there was also a lot of response from midwives and medical practitioners, and from those people I learned a lot about the subject.”

Whatever about the weird negativity, there’s a bucketload of admiration for the kind of rooted poetry that McNish is regularly writing and performing. Her style of delivery and rhythmic structure might reference contemporary urban spoken-word artists such as John Cooper Clarke, Benjamin Zephaniah and (perhaps more pertinently) Kate Tempest, but the subject matter is intrinsically connected to its owner.

It must be a difficult enough job getting all those words to fit together so often and so smoothly?

“I’ll probably get killed for saying this, but I think what I do is easy. I’m not gonna lie – my mum is a nurse, and if I ever say what I do is difficult, she near enough whacks me round the face.”

BOTTLED UP: POLITICS OF BREASTFEEDING

“It wasn’t like every time I went out that people were horrible to me about it. In two years I had only a couple of outright why-are-you-doing-this-in-public comments; the other stuff was little things that I can’t say I really noticed before. Like, in kids’ books all babies are bottle-fed. Or people regularly asking me when was I going to stop. Or did I think it was appropriate in family situations.

Culturally, especially in the UK, we’re not open to the idea of it in public spaces, let alone the reality. When I breastfed in public, every time someone offered me a cloth to make it more discreet, it made me feel even more awkward.”

From ‘Embarrassed’ by Hollie McNish

I think, For God’s sake, Jesus drank it
So did Siddhartha, Muhammad, and Moses
And both of their fathers
Ganesh, and Shiva and Brigit and Buddha
And I’m sure they weren’t doing it sniffing on piss
As their mothers sat embarrassed sitting on cold toilet lids
In a country of billboards covered in tits
In a country of low-cut tops cleavage and skin
In a country of clothed bags and recycling bins
And as I desperately try to take all of this in
I hold her head up, I can’t get my head round the anger