Why do Irish institutions still call themselves ‘royal’?

More than 90 years after independence, academies and colleges based in Ireland retain obsolete royal identities 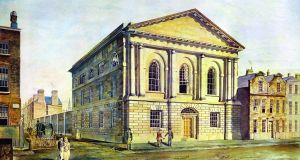 It is puzzling to me that, despite Irish independence since 1922, several of our major academies and institutions maintain “royal” status. The recent “Neighbours: Britain and Ireland” series of Irish Times articles gives some fresh insights into the evolving and maturing of our relationships with our neighbours in the UK, leading me to consider why the Irish have a tendency to cling to the old colonial order?

At their foundation, recognition of these bodies’ constitutions was sought from the relevant ruling authority, the British monarchy. Specific to the Irish cultural sector, the RHA gained its Royal charter in 1821, and the RIA was granted its charter in 1786.

Admittedly the RHA existed longer under the British monarchy since its foundation than the past 94 years under Irish independence. It is surprising that the destruction of their Abbey Street premises from shelling by HMS Helga in 1916 didn’t prompt a more immediate identity crisis. Perhaps there is a desire to reflect status as professional societies comparable with the Royal Academy and Royal Society in the UK, but there are international examples of alternative strategies.

In post-revolutionary France, the Royal Academies were reformed in 1795 under the Institut de France, with the regrouping of its five academies including L’Académie des beaux-arts.

In the United States, the National Academy, modelled on the Royal Academy in London, was founded in 1825, to promote the practice and exhibition of fine art that they believed could flourish outside of the aristocratic patronage system.

The lack of similar reform in Ireland suggests less cognisance of the role of its academies as representative of a sovereign Republic.

Royal patronage is no longer the lifeblood of these organisations; if it were, they would have exsanguinated by now. The RDS, RIAI, RCPI and RCSI generate much of their own revenue through fees, professional services, activities and business ventures and are independent, autonomous organisations.

Irish state funding, does, however, support the important work undertaken by the RHA and the RIA. In January of 2015 the Arts Council announced funding for the RHA of €361,000. The 2014 RIA financial report shows income from the Higher Education Authority in excess of €2.7 million.

The 1916 Proclamation makes three references to sovereignty, stating: “We declare the right of the people of Ireland to the ownership of Ireland, and to the unfettered control of Irish destinies, to be sovereign and indefeasible.”

The seven signatories were highly aware of the potency of symbolism in culture and the arts in crafting a sense of independent identity. Persistent association with a foreign monarch, stemming from historic charters, threatens to perpetuate the optics of Irish academies as elitist, outmoded institutions.

It would be interesting to hear the rationale from the many fine artists and members of these Irish academies and colleges, for the retention of their Royal titles. Should tradition trump adaptation?

Either the titles we use bear significant cultural relevance, or they are redundant. Hopefully the decade of centenaries will stimulate dialogue and reflection on this. The symbolic shedding of old colonial identities would not only be more authentic, but potentially liberating and transformative too.

Marion McEnroy-Higgins is a lecturer in Art History & Critical Theory at the Centre for Creative Arts & Media, Galway-Mayo Institute of Technology

To have your say on this article, Irish Times subscribers may use the comments field below. Other readers may send a letter to lettersed@irishtimes.com