The Thomas Clarke papers: An impish wit who fretted about money

Thomas J Clarke, whose name appeared first among those of the signatories to the Proclamation of the Irish Republic, was an unbending Fenian – and a mordant, impish wit

Some 20,000 digitised documents on the leaders of the 1916 Rising are to become available on the National Library's website. Katherine McSharry from the library discusses some of the documents on Thomas Clarke and James Connolly in the collection.

Thomas J Clarke was, at 59, the elder statesman of Irish republicanism when he was executed for his part in the Easter Rising, in 1916.

The man whose name appears first among those of the seven signatories to the Proclamation of the Irish Republic was a solemn, unbending Fenian who survived years in British jails and was determined to carry on the fight during the Rising even when all was lost. That he was neither a poet nor an intellectual might explain why, unfairly in the view of many, he has a lower profile than Patrick Pearse or James Connolly. 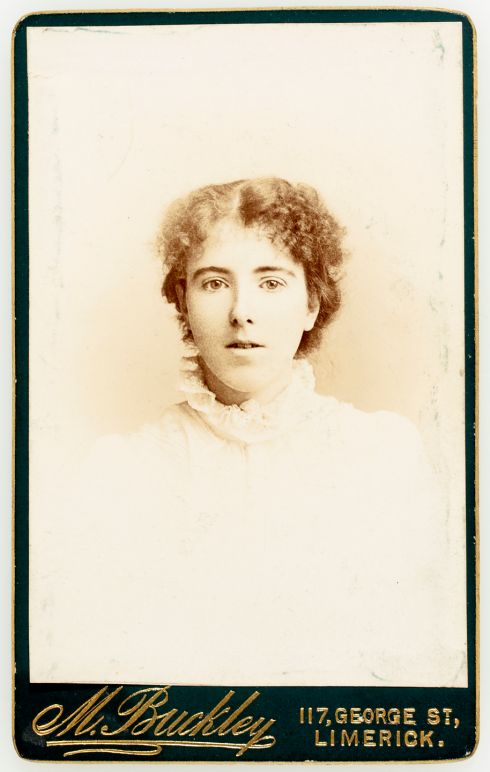 Another side of Tom Clarke emerges in the papers that the National Library of Ireland has just released as part of its project to put all of the signatories’ personal papers online for the centenary of the Rising. Clarke’s papers, which the State bought in 2006, include lengthy correspondence with the Irish-American Fenian Joseph McGarrity.

They show his mordant, impish wit and convey a very human side to Clarke, who frets about making a living – as most self-employed people do – and is tender about his wife, Kathleen.

Clarke’s first mentor was the old Fenian John Daly, whom he met as a young man growing up in Dungannon, Co Tyrone. Clarke married Daly’s niece Kathleen Daly, who was 21 years his junior. Clarke was so enamoured by this storied republican family that he called his first son Daly.

Daly Clarke was born in Brooklyn in 1902. In 1907 the Clarkes moved back to Ireland, and Tom Clarke set up a tobacconist’s on Parnell Street in 1908.

In one letter Clarke writes to his son about getting a dog to mind the shop. Even then he couldn’t resist a dig at the old enemy. “He is a great dog and can tumble heels to head when I tell him. I am going to train him to sell tobacco and cigars and also to sell newspapers in the street. Granny Clarke has a big black dog with a bushy tail – his name is Kruger because he doesn’t like the English.” Paul Kruger was the Afrikaner leader who led the revolt against British rule in the first Boer War. “He is a great dog and always wants to carry a parcel in his mouth when he is going out and he and I are great friends and he won’t go out with anyone else.” 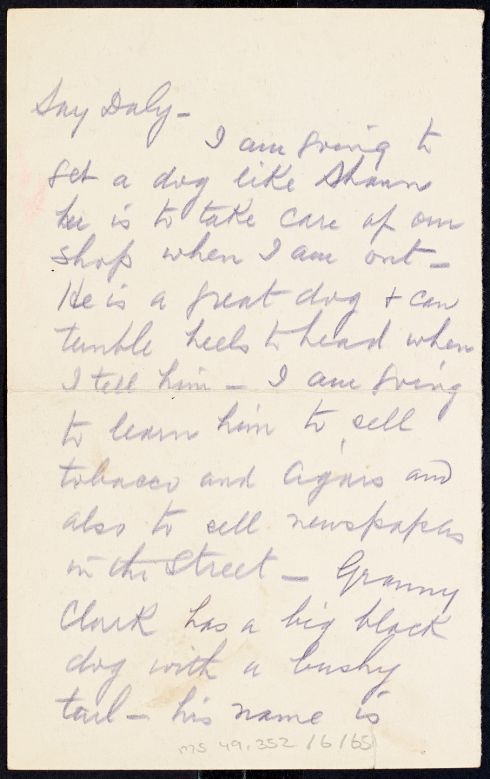 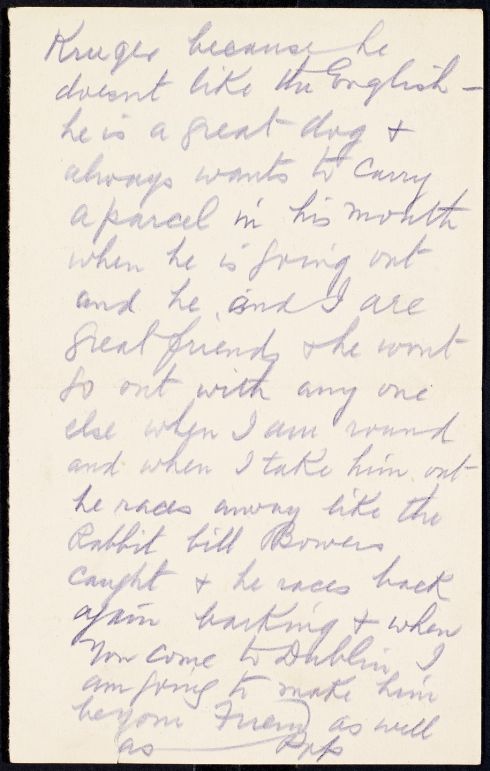 The authorities, which regarded him as an extremist, monitored Clarke’s shop and mail, in response to which he devised an ingenious way to get information to McGarrity. Clarke wrote letters to an intermediary as if he were an Orangeman writing to a fellow Orangeman. The intermediary forwarded the letters to McGarrity, writing Clarke’s name at the bottom.

In one letter Clarke writes: “Only for the Defence of the Realm Act, Ireland would be at the mercy of the wretched physical force party but as it is I don’t think there is any great fear of them pushing their policy to extremes as we have them well watched.”

The “brotherhood”, which is to say the Orange Lodge that Clarke refers to, has been promised arms from Canada, and they will come from “Lodge 67”. The number is surely code: the Fenian uprising was in 1867.

Clarke was also able to tell McGarrity how police had picked up Seán Mac Diarmada, his sidekick. Mac Diarmada was arrested in Tuam in May 1915 under the Defence of the Realm Act for publicly discouraging Irishmen’s enlistment in the British army in the first World War.

“The government made a great capture last Sunday week – a fellow named McDermott,” Clarke writes. “He is one of those bloodthirsty, good for nothing thunder and turf fellows who is always spouting sedition and who at one time ran a rag I think he called it Freedom. Well this lad went down to Tuam and there commenced to give out against our glorious Empire.”

He signs off the letter as Tee Dee. Somebody writes on the bottom “TD = SC = Supreme Council = Tom Clarke”.

After Tom and Kathleen Clarke’s 1907 returned to Ireland, in March 1908, just as he opened his tobacco shop, she gave birth, in Limerick, to Tom. Kathleen fretted about the business. Her husband writes to her that he gets in “45 dozen (540 newspapers) a week and sells all except 10 dozen”. Between the newspapers and periodicals he estimates that he was making the rent on the shop. 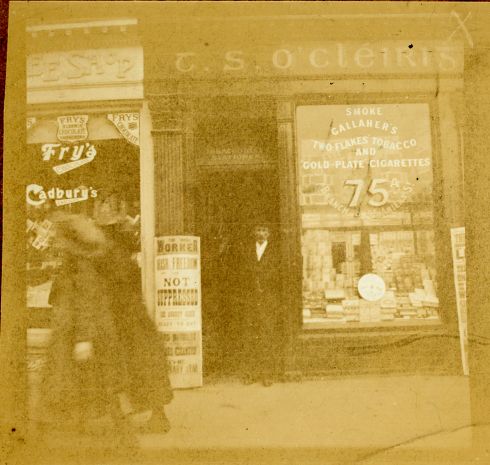 “Don’t worry girl about whether we made a mistake in coming home. I feel sure we did not. The only thing that is worrying me is the load of debt that has to be cleared off. If we were only starting from even, there would a comfortable living for us here in Dublin.” This may be a reference to a US business venture that went wrong for the couple.

The National Library’s head of digital, Katherine McSharry, says the papers show the extraordinary bond between the couple and their commitment to the cause, a feature of all the spouses of the Proclamation signatories. Kathleen become a member of Fianna Fáil and lord mayor of Dublin.

“In a very early letter, after she has agreed to marry him, Clarke says ‘God bless you, my brave girl’, and this sense of tender, affectionate pride in her bravery and independent spirit shines through in their letters.” 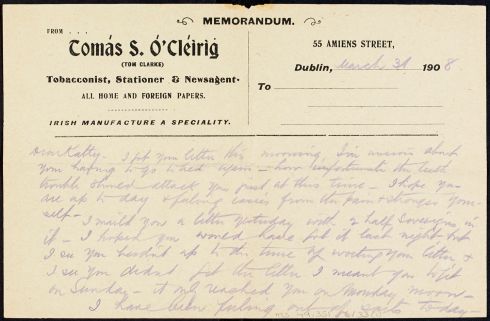 The Visiting Hour: Stephen Rea, a nursing home, the pandemic

YA fiction round-up: Debut novel focuses on friendship and love after the Troubles

The Movie Quiz: What is the only X-rated film to win the best picture Oscar?

€245,000 each in freebies: The bulging goody bags offered to top Oscar nominees

Andrea Gilligan: A kindly voice among the macho men of Newstalk

Morrissey hits back at Simpsons parody: ‘In a world obsessed with hate laws, none protect me’

What did Brian Boru ever do for us?