An Irishman’s Diary about Jean Jaurès 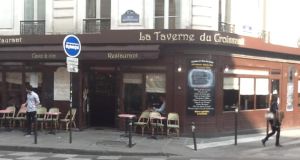 “Unnoticed by Jean Jaurès, they were being watched from the street by Raoul Villain. He had been stalking the socialist leader and was very close to shooting him the previous night before losing his nerve. This time he didn’t hesitate. Drawing the screen aside, he fired twice through the open window and Jaurès died soon afterwards.”

Everybody knows it was the shooting of Archduke Franz Ferdinand by a young Serb in Sarajevo in 1914 that lit the fuse for the first World War.

But less well remembered, at least outside France, is another assassination – in some ways even more ominous – that happened a month later. In Paris this week, I found myself sitting in the cafe where it happened.

The victim was Jean Jaurès, a then 54-year-old pacifist, journalist, and leader of the Socialist Party, who to the last moments of his life had been working to prevent the war that seemed inevitable.

His assassin was an archaeology student obsessed with regaining Alsace-Lorraine, lost to the Germans in the humiliation of 1871. He went by the name, bleakly comical in English, of Raoul Villain.

Born in France’s deep south, at Castres, Jaurès was the son of a failed businessman. But he became a brilliant student, majoring in philosophy and finishing third in his year at the École Normale Supérieure, just behind Henri Bergson, one of the 20th century’s greatest thinkers.

In his subsequent political evolution from a right-of-centre republican to socialist, Jaurès was never an ideologue. His concern was usually with the rights of the individual, as in the Dreyfus affair, where he sided with Émile Zola in defence of the Jewish army officer. And he was universally respected in French political circles, if not universally liked.

As John de Courcy Ireland wrote in this newspaper half a century ago, “he was a great patriot, though hated by those who make a profession of patriotism”. By 1914, his fiercest enemies were the Revanchistes , who saw the coming crisis as opportunity to regain the territories lost to Bismarck a generation before.

To them, opponents of the war were defeatists, even traitors. But in this as in most things, Jaurès was philosophical. “We love [France] enough to consent, if necessary, to pass for bad Frenchmen”, he said.

Even after the events in Sarajevo, as international ultimatums flew and the alliances and blank cheques written in the years previously were presented for payment, Jaurès remained optimistic war could be avoided – a general strike of workers being one possible weapon against it.

As the “July crisis” deepened, his optimism waned. But even in his final hours, asked by a senior government official how he would act if the momentum towards war continued, he said he would do everything in his power to ensure that at least the disaster would be not on his party’s conscience.

Worried about the socialists’ tactics, the government man nevertheless warned that Jaurès would be powerless to stop the flow of events. “You will be assassinated on the nearest street corner,” he warned, prophetically.

Later that evening, Jaurès told colleagues at his newspaper L’Humanité that he would write another “J’accuse”, echoing Zola’s famous tract on the Dreyfus affair, but in this case naming all those, in France and beyond, who were responsible for the impending catastrophe.

At 9pm, they adjourned preparation of the next day’s edition to go for dinner, opting for the nearby Café du Croissant, on a corner of Rue Montmartre, a spot popular with journalists and usually quiet. That night, being Friday, it was busy, so the party had to be seated by a window.

Unnoticed by Jaurès, they were being watched from the street by the aforesaid Villain. He had been stalking the socialist leader and was very close to shooting him the previous night before losing his nerve. This time he didn’t hesitate. Drawing the screen aside, he fired twice through the open window and Jaurès died soon afterwards.

Villain was tried for the murder in 1919 and, notoriously, acquitted by a jury in a country still uncomfortable with Jaurès’s legacy.

He subsequently fled to Spain to escape notoriety. But his past, and another war, caught up with him. Living in Ibiza in 1936, he was shot by Spanish republicans suspicious of his behaviour.

As for Jaurès, he was subsequently vindicated in the formal French manner, by having his remains exhumed and transferred to the Panthéon in 1924. He is also today commemorated by many street names and by a large plaque on the front of the cafe where he had his last supper.

But the assassination achieved its immediate aim. The day after his death, August 1st, notices went up throughout the country announcing general mobilisation. By August 4th, when Jaurès was buried, all the major powers of Europe were officially at war.

The Call of the Wild: Harrison Ford in one of his most engaging performances
7

Philosophy and a little passion: Roy Foster on WB Yeats and politics
10