An Irishman’s Diary about mythical quotations 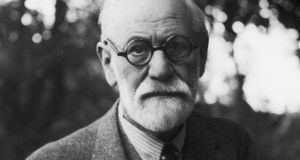 ‘The book includes at least one Irish joke, which Freud (above) considered very interesting. It’s an old joke, from the 19th century. And it must be said that, while few witticisms remain funny after Freud has analysed them, this one was struggling even before it reached the couch.’ Photograph: Casparius/Hulton Archive/Getty Images

It was with a certain sadness recently that I finally called off the search for the origins of the quotation wherein Sigmund Freud is claimed to have said that the Irish were the only race impervious to psychoanalysis. I’m fairly sure now that, much as we would love him to have done, he never said any such thing. Or if he did, he left no record.

Ever since a character in Martin Scorsese’s Boston mob movie The Departed (2006) broadcast the supposed comment to a mass audience, many people have been hunting the original. And there was hope, for a time, in the sheer voluminosity of Freud’s writings, the darker corners of which might not yet have been penetrated by Google.

Again and again, however, the search ended, not with the Austrian neurologist, but with the English writer Anthony Burgess. Who, back in 1980, in the preface to a book of short stories, wrote that an unnamed follower of Freud had separated human psychology into two categories: Irish and non-Irish. That, it seems, is where the idea took root.

It’s a shame Freud didn’t say it, because, as with many urban myths, the notion that he might have is very plausible. After all, he wouldn’t have been the first to diagnose a lack of conventional rationality among natives of this place. The English language itself has perpetuated the notion, via such phrases as “a bit Irish”, referring to something that makes no apparent sense.

And even if that and the Freudian quip were both implied insults, they were clearly very popular with their targets, especially Freud’s. In a globalised world, exceptionalism of almost any kind is to be treasured. Besides which, colonialism and the reputation of psychoanalysis have both been in retreat worldwide for a long time now.

So, like the N-word among black Americans, the supposed Irish immunity to what passed for rational thought elsewhere could be worn as a badge of pride. Unfortunately, it looks as though Freud never insulted us in this manner. And personally, I find that more annoying than anything he could have meant by the thing he didn’t say.

What sparked my latest failed attempt to source the quotation was a belated reading of Freud’s book: The Joke and its Relation to the Unconscious. I picked this up at his former clinic, now a museum, in Vienna a couple of years ago. But I’m afraid I quickly put it down again, and only recently summoned up the energy for a renewed assault.

I see now that the book includes at least one Irish joke, which Freud himself considered very interesting. It’s an old joke, from the 19th century. And it must be said that, while few witticisms remain funny after Freud has analysed them, this one was struggling even before it reached the couch.

It purported to be a true story, told by a German traveller to Ireland, circa 1870, who had visited a waxworks museum here and overheard an exchange between a customer – a young woman – and the curator.

Faced with a representation of the Duke of Wellington on horseback, the woman found it necessary to ask which of the figures was the horse and which the duke. Whereupon the curator replied pleasantly that the decision was hers: “You pay your money and you have your choice.”

One’s immediate (post-colonial) instinct here is to suspect that this is another aren’t-the-Irish-stupid? joke. But apparently it’s not. As Freud explains it, the intended butt is the scoundrel curator, presiding over exhibits so shoddy that a horse and man may look alike, yet, with supremely brass neck, presenting the customer’s freedom to interpret the piece as a virtue of his conscientious approach to business.

Having defined it thus, Freud claims it to be a fine example of the “representation of a disagreeable thing by its opposite” strategy, which he believes is a feature of jokes and dreams alike.

But I’m not convinced he was right in his interpretation of the story. And even if he was, I suspect he missed some of the local nuances. I’d wager two to one that the young lady (a Fenian sympathiser if I’m not mistaken) was making sly reference to the Duke of Wellington’s famous insult to the land of his birth, after someone called him Irish: “Just because a man is a born in a stable does not make him a horse”.

Which of course he never said, either. That’s an even more popular myth. As far as anyone knows, the quip was first made in a speech by Daniel O’Connell, who was also referring to Wellington’s supposed Irishness, but denying it, as an insult to the Duke.

‘Ten of the best books set in Ireland’: Does the Guardian get it right?
10 Welcome to the child sex capital of Europe
Real news has value SUBSCRIBE