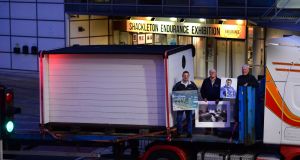 The cabin in which Irish adventurer Ernest Shackleton died of a heart attack in the Antarctic Ocean in early 1922 has landed in Letterfrack in Connemara for restoration, following its donation by a Norwegian owner.

Shackleton’s “sea bedroom” arrived on a truck to Conservation Lettefrack on Friday morning, where it will be analysed and conserved by manager Sven Habermann before its eventual transfer to the Athy Heritage-Centre Museum in Co Kildare for next year.

Its current Norwegian owner, Ulf Bakke, agreed to donate it to the Co Kildare centre after Corkman Eugene Furlong tracked it down on a visit to Norway in 2008.

“It was very moving to see - it came through the village, and was taken off with two forklifts,”Janet O’Toole, administrator with Conservation Letterfrack said. One of the Athy centre committee members, Joe O’Farrell, travelled the entire journey from Norway to Dublin port and west to Letterfrack with the shipment.

The cabin was originally part of the Norwegian schooner-rigged steamship, Quest, which Shackleton had acquired for his final voyage to try and clear his debts.

“You’re always wanting me to give up things, what is it I ought to give up?”had been the explorer’s last words in it, speaking from his bunk in the to his friend and medical doctor Dr Alexander Macklin.

“Chiefly alcohol, boss, I don’t think it agrees with you,” Macklin had recalled replying – only to get no response back.

Shackleton passed away in the small hours of January 5th, 1922, while anchored off the whaling station at Grytviken on South Georgia. Ironically, that station had been synonymous with his survival and that of his fellow adventurers on his expedition to cross the Antarctic continent six years earlier.

After his death, the ship continued on its journey under the command of Frank Wild, calling into Elephant Island en route back to England that summer. In 1923 the vessel was bought back by its original Norwegian owners.

It worked as a minesweeper during the second world war, and sank during a seal hunt off the Labrador coast in 1962. Fortunately, the ship’s owner, Johan Drage, had removed the cabin, and it was transported by horse and cart to a farm at Saltdal near Rognan in Norway’s Nordland region.

The current owner, Drage’s great grandson Ulfe Bakke, had played in it as a child,and it was known as “the Shackleton”.

Mr Furlong, who was also in Letterfrack for the cabin’s arrival, recalled that he felt quite emotional walking into it on the Bakke farm, as he realised he was the first Irish person inside it since Shackleton died.

Mr Bakke decided to donated it to Co Kildare, and shipment was arranged at cost through shipping company DFDS.

The Athy centre has the only permanent exhibition anywhere devoted to Shackleton, including an original sledge and harness and a model of his ship Endurance, which began to be crushed in pack ice in the Antarctic just a century ago this week.

It will be displayed along with written material, including a description of the cabin’s interior by scout James Marr, who travelled with the adventurer on that last trip.

“The door of this cabin opened onto the after-side; and on the port side was the bunk, stretching the entire length of the room, with drawers beneath and a single porthole above,” Marr wrote.

“A small washstand stood against the forward bulkhead; shelves well-fitted with books on the starboard side, and a small, collapsible chair completed the more elaborate furnishings. In addition . . . was a small white-enamelled cabinet fitted with an oval mirror in the door, and an emergency oil-lamp for use when the electric supply gave out.”