The golden jubilee commemorations were dominated by veterans, the Catholic Church was prominent and some guests were locked out 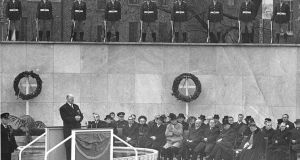 Easter Sunday, April 10th, 1966, was “warm and bright, and Dublin was in a mannerly mood,” reported Mary Maher in The Irish Times. The official ceremonies to mark the golden jubilee of the Rising began with a military parade on O’Connell Street, with an estimated 200,000 spectators gathering in the city centre. Standing tall at the GPO, president Éamon de Valera took the salute. To his right and left stood 900 Rising veterans.

In this, as at other events throughout the week, veterans (including the president and the taoiseach, Seán Lemass) were at the heart of the commemorations. “There were 1,000 of them, a long column of elderly men and women all brightly bemedalled and broken only by the historic Black Raven Pipe Band,” wrote Maher.

Observers noted many empty seats on the viewing stand around de Valera. Conspicuous by their absence were the Fine Gael and Labour leaders, Liam Cosgrave and Brendan Corish, along with the president’s opponent in the impending election, Tom O’Higgins.

Subsequently, the Department of Defence apologised for failing to send invitations to “certain prominent persons”. The Irish Times reported that the omission was due to “bureaucratic bungling” rather than political intrigue, but criticised Lemass for his lack of attention to detail. In 1966, as in 2016, ownership of the legacy of 1916, along with questions of organisational competence, ran through the coverage of the commemorations.

laid Later that Sunday the president laid a wreath at Kilmainham Gaol and formally opened the historical museum there. That night the

Gael-Linn film An Tine Bheo (The Living Flame) premiered in the Savoy Cinema.

On Easter Monday churches of all denominations held religious ceremonies to mark the anniversary. At noon the president formally opened the Garden of Remembrance at Parnell Square and later Raidió Éireann presented a commemorative concert from the Gaiety Theatre featuring a cantata, A Terrible Beauty is Born, composed by Brian Boydell.

In 1966, some 55 per cent of households had a television, and Teilifís Éireann brought the official ceremonies into homes across Ireland. On Easter Sunday night the station aired the first part of its drama-documentary series, Insurrection, which would be broadcast on successive evenings the following week.

The commemorations had a visible impact on the fabric of the city and the country, with new statues and monuments erected. CIÉ renamed major railway stations after 1916 revolutionary leaders and Dublin buses bore the commemoration emblem, the “Sword of Light” or “Claíomh Solais”. which the government had adopted as the emblem for the year. The most profound legacy, though, was the removal of Nelson’s Pillar by a republican bomb a month before the parade. There was a strong strain of dissatisfaction in a number of quarters at what was seen as the betrayal of the ideals of the Proclamation, with demonstrations by Irish language activists, republicans and others unimpressed by the realities of the State that had emerged from the Rising.

Perhaps the most obvious difference between the commemorations of 1966 and those of 2016 is the changed role of the Catholic Church. Nearly every event across the country in 1966 commenced with a blessing from the local bishop, and, more often than not, a Mass. When some civil servants suggested a more ecumenical approach to the ceremonial opening of the Garden of Remembrance, the idea came to nothing. Archbishop John Charles McQuaid performed the blessing but invitations were sent to various church leaders to sit on the ceremonial platform. In a moment of perfect symbolic irony, the Church of Ireland archbishop of Dublin, along with the representative of the Presbyterian church, found themselves locked out of the opening.

“When they arrived at the Garden of Remembrance, the gates had already been shut for the ceremonies and officials were unable to find a key to open them,” The Irish Times reported. “A key was eventually found, but at that stage the ceremonies were at an end.”