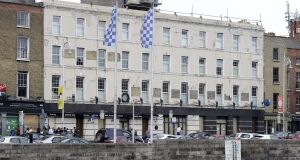 The Ormond Hotel: plans for a five-storey hotel with 121 bedrooms have been approved. Photograph: Dave Meehan

Queens Park Rangers owner Tony Fernandes has been given the go-ahead to demolish and redevelop the Ormond Hotel on Dublin’s Liffey quays, three years after first seeking permission.

The hotel, which features in James Joyce’s Ulysses, was bought by developer Bernard McNamara in 2006 for €17 million, a year after it closed.

He put it on the market in 2009 with a price tag of €7 million, but it was subsequently bought for less than €2.5 million, by Monteco Holdings a company owned by Air Asia boss and football club owner Mr Fernandes.

Monteco in 2013 applied for permission to demolish the Victorian hotel and replace it with a 170-bedroom, six-storey hotel.

However, Dublin City Council refused permission, as did An Bord Pleanála on appeal. The board described the scheme as “monolithic” and “unsympathetic”, and likely to “seriously injure” the character of a conservation area.

The company put together a new plan for a five-storey hotel with 121 bedrooms, twice the number of bedrooms as the old hotel. It was granted permission from the council last year.

However the scheme was appealed to An Bord Pleanála by local residents, largely because of its scale.

An Taisce highlighted the hotel’s cultural significance, since it is the scene for the Sirens chapter of Ulysses.

The Ormond Hotel opened in 1889, but was rebuilt, with the demolition of original houses, in 1900.

The developers pointed out that the existing hotel building earmarked for demolition does not contain any remnants of the hotel as written about by Joyce. However they said it was “considered appropriate for the proposed development to provide some recognition and acknowledgment of the Joycean theme” by embedding text from the book into the floor and courtyard with bronze plaques or lettering.

An Bord Pleanála has granted permission, on condition that the new hotel operated as “The Ormond Hotel” to reflect and retain the site’s connection with the city’s literary culture.

The Music Quiz: Who played a Dublin gig on the same night as Adele in 2008?
3