Passchendaele: A killing field of mud 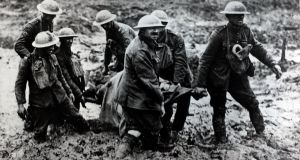 By the summer of the third year of the Great War, human despair had emerged as a common enemy. The Third Battle of Ypres, now more widely referred to simply as Passchendaele, was a horror experienced in filthy conditions. Many of the exhausted soldiers no longer thought of the enemy as wearing a uniform. It was the mud, deep and devouring. A wounded man came to fear death by drowning, a greater dread than a rogue shell. History repeats nasty tricks; the Russian winter had confounded Napoleon, and would again prove central in the defeat of Hitler.

But in Belgium in 1917, the rain was relentless. It made aerial bombardment impossible and also impeded the transport of heavy guns. Thousands of exhausted horses and mules died attempting to haul gun carriages across the devastated, cratered landscape which had been churned up by shelling.

It took six men to stretcher a wounded soldier across the glue-like surface. Many survivors recalled stumbling along, their boots being sucked off their feet and then came the sensation of sinking up to their waists in mud.

Ypres was not a grand spoil; the old Belgian city had strategic importance as an agricultural and commercial centre dominating Western Flanders. Set in a low-lying, shallow basin about 66 feet above sea level, to the east the topography consists of a series of low, wooded ridges. From these little hills came streams, more water, always water, but nothing to the amount that appeared as if by an evil force. It was to rain every day but three in the August of 1917. The land had once been reclaimed from the sea through careful draining and irrigation carried out for centuries. Battles had been fought there many times; a century earlier, Wellington and Blücher had bested Napoleon at Waterloo, only 65 miles away.

Wider international developments had taken place. Some months earlier on April 6th, the United States had finally entered the war, provoked by the loss of merchant shipping from German attack. Meanwhile, the Russian Tsar had abdicated and Lenin, with his mantra of bread for the people, land to the peasant and peace to all peoples, was biding his time in Switzerland. Germany would facilitate his return home by train to a country weary of war yet eager for change.

The French were exhausted. The Italians had made a five-mile advancement just north of Trieste, only to suffer twice as many losses as the Austrians, so they withdrew. It was left to the British to strike in Flanders and to do it without the Americans. Lloyd George was against the action, yet did nothing to stop it. Gen Haig wanted to advance into Flanders.

The lead-up to the offensive which would begin on July 31st included the blowing up of the 21 mines created under the Messines ridge through the deployment of one million tons of TNT. The planned explosion on June 7th was so terrific it was heard in London, some 200 miles away. It seemed to silence the Germans who withdrew.

It gave the British a short-lived advantage and made their supply lines secure, for a brief period. It would seem that such a spectacular gesture would pay dividends but the next British attack did not take place until July 31st. By then the Germans had regrouped and completed about six miles of intensive digging in which to position heavy machine guns, mounted in concrete. It didn’t take long for the Tommies to think of a nickname – “pill-boxes”.

Even in hindsight it is difficult to understand, never mind explain, the seven-week lull between Messines and the beginning of Third Ypres, the initial British name for the battle. Exhaustion is more likely than military complacency. The German response came in the form of six separate defence positions, a forward battle zone, layered and, in effect, creating a formidable battle zone.

The German heavy guns held 64 strong points which remained intact. Early on July 31st when the British attack began shortly before 4am, low cloud obscured the rising sun. Initially the infantry made some advancement along the 11-mile front but not in crucial positions such as a coveted area which was a continuation of the Messines ridge.

It was strategic as it gave the German artillery a height advantage with clear views of the advancing British. The opening hours saw nothing of the carnage of the first day of the Somme, 13 months earlier. But Haig did not want to take the ridges around the Ypres salient; he was intent on a major incursion into the German defences.

What happened next was dictated by nature not generals; heavy rain fell for a week, twice the monthly average even for a region with a damp climate suitable for flax. The shelling tore up the earth and the craters filled with rain which quickly turned to mud. Soldiers drowned in trenches because they were unable to clamber out as the walls gave way under them.

Wounded and dying men being transported on carts pulled by horses and mules, themselves staggering through the quagmires, often rolled off and were lost in the slime which suffocated them. Even moving the light field artillery was hazardous, moving a single gun about 250 yards required an effort lasting six hours or more. Back in England, rhetoric was being directed at the “evil Hun”; no one mentioned the mud.

In time, commanding officers would weep publicly about the horrors their soldiers endured. Maj CL Fox of the 502 Field Company Royal Engineers wrote: “There was no ground to walk on; the earth had been ploughed up by shells not once only, but over and over again, and so thoroughly that nothing solid remained to step on; there was just loose, disintegrated, far-flung earth, merging into slimy, treacherous mud and water round shell holes so interlaced that the circular form of only the largest and most recently made could be distinguished.

“The infantry in the outposts moved hourly from shell hole to shell hole, occupying those that had just been made and which had not, in consequence, yet filled with water. All honour to them and the way they ‘stuck’ it.

“Covered with mud, wet to the skin, bitterly cold, stiff and benumbed with exposure, cowed and deadened by the monotony of 48 hours in extreme danger and by the constant casualties among their mates, they hung on to existence by a thin thread of discipline rather than by any spark of life. Some of the feebler and more highly strung deliberately ended their lives.”

It reads as an account of torture, not war. Admittedly most of the material to hand is written from the British viewpoint and it seems only fair – and necessary – to point out that the German army experienced similar hell in the surreal conditions prevailing in Flanders in late Summer 1917.

Another account, this one written by Bombardier JW Palmer, 26 Brigade Royal Field Artillery, begins “It was mud, mud, everywhere: mud in the trenches, mud in front of the trenches, mud behind the trenches. Every shell hole was a sea of filthy oozing mud. I suppose there is a limit to everything but the mud of Passchendaele – to see men keep on sinking into the slime, dying in the slime – I think it absolutely finished me off.

“I ‘knew’ for three months before I was wounded that I was going to get it, I knew jolly well. The only thing was I thought I was going to get killed. Every time I went out to mend a wire I think I was the biggest coward on God’s earth. Nobody knew when a wire would go but we knew that it had to be mended . . . There were so many days when I don’t remember what happened because I was so damned tired. The fatigue in that damned mud was something terrible . . . It was very, very difficult to mend a telephone wire in this mud . . . As you got one foot out, the other one would go down.”

Eventually after often wishing he could die, Palmer was severely wounded in heavy shelling. “I was too damned tired even to fall down. I stood there. Next I had a terrific pain in the back and the chest and I found myself face down in the mud. My pal came to me, he tried to lift me. I said to him, ‘Don’t touch me, leave me. I’ve had enough, just leave me.’

After serving in many places throughout the war, including Gallipoli, Irish poet Francis Ledwidge died on the opening day of the battle of Passchendaele. He was not killed in the line of fire. Instead he was working in a party of soldiers laying duckboards in a vain attempt to create a passable route over the mud, when a German shell hit him. It blew him to pieces before the horrified eyes of his battalion, the 1st Royal Inniskilling Fusiliers. The Welsh poet Hedd Wynn, a nationalist to his core who had been opposed to the war, yet signed up, also died that day.

Passchendaele is remembered as a black chapter in a war which was hell. Perhaps it was simply that after three years, no one wanted to go on. The early bravado was long since exhausted. For Captain Harry Yoxall, 18th Battalion, Royal Rifle Corps, “The Third Battle of Ypres someone has called it: but there is only one battle of Ypres. It has lasted from October 1914 and, with Verdun, it is the biggest battle of all.”

Not gas, not tanks, not even aircraft, the most merciless enemy was the foul mud and with it the stink of wet rotting bodies. Passchendaele exposed the British leadership, the generals. A senior staff officer on finally visiting the battle field, towards the very end, burst into tears and asked his driver: “Did we send our men into that?” The answer was unwelcome, if unavoidable. Yes, they did.

From Messines to Passchendaele - the 11th edition of the Century series.