Nuns, non-virgins and a serial killer: Sharing stories through nature in west Cork 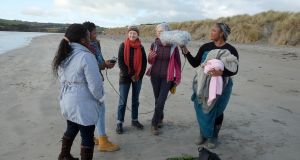 Khanyo Dlamini points to reeds growing by the side of the road to Inchydoney beach in west Cork, and reflects on how they are used in her native South Africa “for our traditional ceremony for the virgin girls. You carry the root, and if you are not a virgin, it breaks. It breaks! Oh believe you me, it breaks while you are holding it.”

She is walking from Clonakilty Lodge direct provision centre with another asylum seeker, Mariama Bah, who nods that she knows of something similar in Sierra Leone. They acknowledge the public shame that comes from this, and Dlamini explains how the girl’s father must pay a cow to her future husband as compensation for the loss of honour.

Their conversation comes to us from Land Walks, a sound project by the artist William Bock about a series of strolls around west Cork with people from Clonakilty Lodge and local residents. In all, eight walks were recorded and then edited to create a sound-score, with music by Justin Grounds, and a website listing the details of each walk.

Land Walks was originally programmed alongside a series of talks and events at Uillinn: West Cork Arts Centre, but coronavirus (also known as Covid-19) has forced it to migrate online, where you can listen to the recordings or download them to your phone and listen while walking the same route.

For Bock the project is a way of exploring his native west Cork through fresh eyes. It seemed appropriate, since so much of the natural landscape is connected to migration and displacement; from the Bronze Age copper mines on the Beara peninsula used by European traders four millenniums ago to the ruined cottages of those who migrated to America. Even the iconic flower of west Cork, the fuchsia blossom, is a migrant from the mountains of Chile, taken into the hearts of locals as a regional symbol.

I’m just sitting in my room bored all of the day … Honestly. I didn’t know that this place was so beautiful

In the recordings of the walks to Inchydoney, Lough Hyne, Tralong bay, Drombeg stone circle and other lesser-known west Cork sites, some of the conversations are stilted and nervous, and the quality of the audio varies, but the moments of connection between Ireland and far distant lands are potent. It’s hard not to reflect on how the honour price for besmirching the good name of an individual in early Irish Brehon law was also a cow – a yearling heifer, to be precise, which was considered the value of a “fer midboth” (a man of middle huts, semi-independent youth).

There’s poignancy, too, as when Bah says, “I’m just sitting in my room bored all of the day … Honestly. I don’t know that this place is so beautiful.” Dlamini agrees with her: “The view of the sun at the end of the sea is just breathtaking.”

When they reach Inchydoney Island Lodge and Spa hotel, they wonder how much it might cost to stay there, and joke about going inside to ask. Bah imagines being able eat so much fine food that she bloats up.

Later they are met by some local women on the strand who point out Nun’s Beach, and explain how, in their youth, only nuns were allowed to swim there. The concept seems as foreign as anything from Africa. The local women go on to point out a rock known as the Virgin Mary’s bank, where the Mother of God is said to have appeared in the 16th century and had her beauty insulted by foreign sailors. They tell the asylum seekers about a type of shell called a sea potato that can be found there, which they say has the Virgin’s likeness etched into it.

It’s this back and forth of shared culture that is most affecting, like when they visit the Tobarín Súl holy well near Lough Hyne on St Brigid’s Day. Michael Burke, a horticulture teacher from the College of Commerce in Skibbereen, introduces a group of nine asylum seekers to the three holy wells in the area, one of which is for curing sick animals and another for humans. The latter is said to be of such purity that if the water is stored in a glass bottle, it will never go green.

It’s part of being an African that somebody would tell stories. I miss it a lot

The group is suitably impressed by this, and by the willow trees growing nearby and the fact that the wells never dry up, but the effect is diminished somewhat when Bah and Isatu Sissay recall a well they know in Sierra Leone in which the water is divided into two different colours. “The water over there, it is white, and over here, it is black. It’s the same water, but they won’t mix together.” West Cork has some fine holy wells, but nothing quite like that.

On a different walk, an Indian woman, who prefers not to give her name, recounts what she misses most from home. “Everything I miss. The food and my relations and my people. Everything I miss.” The smells and sounds in particular, she says, “especially morning time, the birds and the cockerel”. For Dlamini, meal times are a source of homesickness: she recalls the family preparing food on the fire and then gathering “around one big basin and everybody uses their hands to eat together, and so after dinner an elder, or it could be a child even, they tell stories before bedtime with the nice smell of smoke from the wood fire. It’s part of being an African that somebody would tell stories. I miss it a lot.”

On any great journey there’s often one story that gets under your skin; in this case it’s Dlamini’s account of accompanying her mother to the graveside of her murdered son. Her mother had been saving for years to buy a tombstone until eventually she had the cost of it and they set off at dawn to travel to the grave site and find a stone carver. “It was the longest walk I’ve ever done in my life,” Dlamini recalls.

They walked for hours through difficult terrain, seeing footprints going one direction, but none coming back. Eventually, they were so thirsty they needed to stop, and they saw a house far ahead. “It looked like a really dead end, and my mum said ‘Let’s go and knock’.” The owner was astounded to see them there, and begged them not to return by that way again, saying, “I don’t know how you even made it to here. Go the longest way home.”

When they finally reached home, late that night, they heard that the police had just found the remains of about 40 bodies that a serial killer had hidden along the route

Eventually, they reached the grave and paid a man to carve a gravestone for them, but her mother was so exhausted she collapsed on the way back. “She couldn’t go on. I ran to the nearest house … and they managed to help her inside, to give her water. They gave her strength and then she continued.” They were tempted to take a shortcut despite the man’s advice, but in the end the path they spotted disappeared in front of their eyes and they had no choice but to follow the long road back. When they finally reached home, late that night, they heard that the police had just found the remains of about 40 bodies that a serial killer had hidden along the route.

It’s not the normal type of story one hears in a project funded by the Arts Council, and it’s all the more potent for that. While artistic collaborations with residents of direct provision centres can sometimes be exploitative or self-serving, Land Walks and its allied series of public conversations (Land Talks) and art works (Land Marks) works because of the strong community engagement.

The creation of the pieces encouraged and facilitated the asylum seekers to get out of the cramped conditions of their accommodation centres to connect with the local community and the surrounding environment. They got to tell their own story on their own terms, and to share insights with us that we might never otherwise encounter, such as how to make a skipping rope from dried grass, and the precise Zulu word to describe drinking milk in the field straight from a cow’s teat, “ukukleza”.

For Bock, an artist based between London and Skibbereen, its success is down to how “the humble act of walking and sharing our stories brings the diverse experiences of land, plants and people together. And it reminds us that our stories of migration and identity are universal and mirror stories present in the landscape too, like how montbretia and fuchsia came from distant shores.”

Basically, what Land Walks makes clear is that everything and everyone is originally from somewhere else, and that is what forms the basis of our culture.