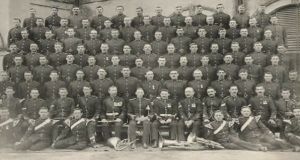 The “Molly Bawn” column in the Weekly Irish Times’ women’s page – probably not written by a woman – observes that: “Women have now been called upon to take up the various business matters of the nation, and so far have nobly answered to all the requirements, physical and intellectual; but there is still a lack generally in their comprehension of money matters.

“This does not merely cover the dealings in sixpences and shillings, about which most of them are astute enough; but the subject of investment, and interest, the buying and selling of shares, the differences between home and foreign values and coinage, and the uses and reason of paper and coinage.”

The author then explains the difference between international currencies from China to the US and the function of paper money: “Paper money stands for the credit of the country it represents , but must always be backed up by having its equivalent in gold. Thus in times of war or pressure, when it is important to keep up the gold supply and not allow it to leave the country, paper notes are issued by permission of the government, and will in due course be redeemed by gold.”

Magistrates in Roscommon spent the day disposing of multiple summonses arising from fighting between Sinn Féin and Redmondite Ancient Order of Hibernians supporters in Athleague, where rivalry between the groups resulted in a major punch-up after a dance.