Miriam Lord: What a shame we can’t do this every year 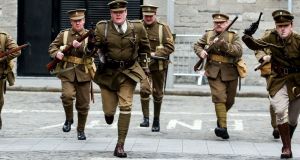 Members of the Irish Great War Society acting out a scene from the Rising in Smithfield, Dublin. Photograph: Maxwells 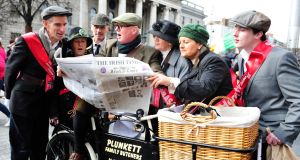 We love a good day out. Publicise it, and they will come.

These may be heady days when hope and history rhyme, but the words “free” and “entertainment” hold out the more immediate promise of a rattling good time.

Yesterday morning the buses and trains were packed on the way into Dublin city. Some, you could see, had already worked out a route map and schedule. There was so much on offer – musical and theatrical performances, talks and exhibitions, céilí dancing and hurdy-gurdies – that a little pre-trip preparation was smart.

Others just came in because they wanted to be there, to say they played their part on Easter Monday 2016.

A hundred years on from the Rising, and the nation saw a popular people’s rising out of the bed and into town for a wander. Curiously, there also appeared to be some sort of training event taking place for a new event in the Rio Olympics.

“Synchronised Wreath Laying.” A new one on us.

As the day wore on, news bulletins began referring to a “simultaneous” wreath-laying exercise, which sounded a lot better than the competitive placing of laurel tributes on wooden frames by politicians. The ceremonies, seven around the capital and four more in centres around the country, took place in strategic locations at the time that the first shots were fired in the Rising.

These events were the formal part of yesterday. The rest of the proceedings concentrated firmly on enjoyment, with some cultural and historical references underpinning the vast programme. Understandably, the centre of the pilgrimage was the GPO. Crowds flocked to the building on O’Connell Street, swarming beneath the portico capturing photos.

So he positioned himself in front of the brass studded big door and spent his time taking snaps of delighted family groups and tourists. The knees of his trousers were covered in dust and grime. “I’ve never been on my knees so much in my life,” he laughed, making sure to get the full door and all important signs in the pictures.

“There’s been loads of Yanks and a huge number of people from the North. I’ve found the Italians very reluctant to part with their phones at first.”

A short time earlier a large contingent of people swaggered from the Garden of Remembrance to the GPO, although some of them had a problem showing their faces. Members of Republican Sinn Féin in paramilitary uniform paraded to O’Connell, with their colour party and flag bearers leading them, looking faintly ridiculous on such a good-humoured family day with their berets, dark glasses and mufflers up over their noses.

They didn’t stay around for too long, but they could put in their time afterwards shopping for republican tat at a couple of stalls on the corner of O’Connell Street and Abbey Street.

“Anyone there for the Union Jack toilet rolls – €3, two for a fiver!” shouted a Northern Irish man, in between filling in a fascinated tourist on the evil of unionists.

We had to ask. He held one up. It had a picture of the Countess on it. But what was the “shake” part of it? He pointed to another garment. “Shake Guevara” he explained.

Paul and Deirdre Power travelled from Nenagh in Tipperary to spend the day at the Reflecting the Rising event. They brought their children Ruby (7), Luke (7) and Jane (4). Ruby said she had been looking forward to seeing the GPO.

“We wanted to be here because I think it’s important for them to have the memory and to say in years to come that they were part of this occasion,” said Paul. They had hoped to go to Kilmainham Gaol, but there was a two-hour wait to get in.

Meanwhile, Carol Maher from Blanchardstown and Linda Martin from Clondalkin came along dressed as members of Cumann na mBan. The two grandmothers made their uniforms, and did a fantastic job. Linda dyed her hat green. Carol even wore a medal, but it fell off. “It’s more fun when you dress up,” said Carol. “It’s good to remember. People say they give up this and that and they think they’re great, but the men and women of 1916 gave up their lives.”

Also remembering was Margaret Walsh, a therapist from Waterford, who wore a replica of a nurse’s uniform from the period. “I’m here to represent the nurses who played such an important part in the Rising. They worked so hard behind the scenes.” She was with her sisters, Jacinta Landy and Ann Marie Flavin, both dressed as elegant ladies with feathered hats and costume suits.

Performance artist Eileene O’Loughlin, originally from San Francisco but now living in Dublin, cut quite the dash with her lace parasol and handmade gown. Her little velvet hat was clasped with a large jewel.

On both sides of the Liffey, the crowds enjoyed the fun. There was even Joe Duffy to delight the people in O’Connell Street (RTÉ played a major role in organising the event), while people danced their socks off at a massive céilí in Earlsfort Terrace. Everyone was in good form. When the Artane Boys and Girls Band marched along the street on their way to the GPO, the crowds parted and warmly applauded them.

It was that kind of day. Although we were slightly disappointed the Ann Summers shop across the road from the post office didn’t make a special effort to Reflect the Insurrection. “Thanks be to God the weather held up,” said everyone. “We should do it every year.”