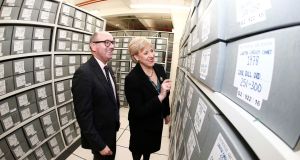 An €8 million project to improve facilities at the National Archives will begin in September, Minister for Arts, Heritage and the Gaeltacht Heather Humphreys has announced.

Ms Humphreys officially launched the design and construction phases for the works at the National Archives building in Dublin’s south inner city yesterday. Once completed, the new facility will provide accommodation for 137,000 archival boxes of four million records, containing an estimated 100 million pages.

The National Archives stores a huge range of public material, including government papers, census records and files dating from the revolutionary period, including secret police files and compensation claims made after the 1916 Rising. Much of its material is stacked on pallets in a warehouse on the site of the old Jacob’s biscuit factory on Bishop Street. The warehouse has no climate control.

Speaking at the launch, Ms Humphreys said she envisaged that the investment would help facilitate the Government’s proposed move from a 30-year to a 20-year rule for the release of State papers.

She acknowledged that the current archival facilities were insufficient to allow for even the 30-year rule to be met by some Government departments. “There are a number of departments we are focusing on,” she said, describing the launch as a first phase. “We’re in a different space now thanks to the recovery, so we’re now in a position to invest in our archives.”

She said she agreed with a 2012 report by the National Archives Advisory Council which stated that “changing to a 20-year rule is impossible” unless there was investment in both staff and space. As the economy continues to improve, she said, she hoped to be in a position to invest further.

The first phase will require the decanting of over 1,900 pallets of archives from the existing warehouse to the rear of the Bishop Street premises and its conversion into a works site for developing archival quality storage and ancillary facilities.

Responding to last week’s call by the Irish Film Board for a reversal of the 40 per cent funding cut in its budget which was implemented during the financial crisis, Ms Humphreys said she had increased the board’s funding this year.

She also commended the board for its “tremendous achievement” at this year’s Oscar nominations. “Of course I agree its funding should be increased, and I’ll be making that case,” she said. “But they’ve made a good case for themselves.”

Asked whether she anticipated being in Beverly Hills on February 28th, when the Oscar winners are announced, or at the Cavan-Monaghan count centre, she laughed and said “I imagine I’ll be in the count centre”.