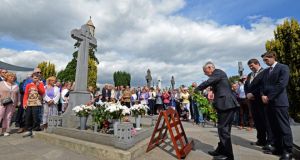 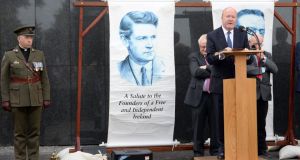 Two ‘giants’ of Irish history were remembered at the 93rd annual commemoration for Michael Collins and Arthur Griffith at Glasnevin Cemetery in Dublin on Sunday.

Collins, who served as minister for finance in the first Dáil in 1919 and who was a member of the Irish negotiating team and a signatory of the Anglo Irish Treaty, was shot dead in an ambush at Béal na mBláth in Cork on August 22nd, 1922.

An armoured car, the Sliabh na mBan, which was part of that convoy, was on display at the cemetery as part of the contribution by the Defence Forces to the commemoration event.

Griffith, founder of Sinn Féin and president of the Dáil from January to August 1922, died 10 days before Collins’s assassination and was buried at Glasnevin.

Minister for Jobs Richard Bruton, Minister of State at the Department of Finance Simon Harris and John Green, chairman of the Glasnevin Trust, led the proceedings, with about 200 people in attendance.

Both graves were blessed by Fr Robert McCabe, chaplain to the Defence Forces, and prayers were led by Geraldine Dalton, with readings by Seamus Scally.

Mr Harris laid a wreath on behalf of the Government at Griffith’s grave, a short walk from that of Collins.

“As we progress through the decade of centenaries, it is even more important that we continue to acknowledge these two giants of the Irish Free State,” he said.

Griffith’s career as a journalist and politician had been “prolific and at times contentious”, Mr Harris said. But he had always championed democratic values.

Mr Bruton later laid a wreath at Collins’s grave, the most visited in the cemetery. It was fitting that the event was included as part of the Government’s programme for the decade of commemoration, Mr Bruton said.

He also acknowledged the participation of the Irish Defence Forces in honour of General Collins, their first commander-in-chief.

Delivering the annual oration at Collins’s graveside, former editor of The Irish Times Conor Brady said that as the State approached the centenary of its establishment, concepts of nationhood and concepts of sovereignty had “thankfully evolved from the rather simple model that was widely accepted as the norm and understood 100 years ago”.

He believed Griffith and Collins would be very proud of what their successors in the political life of the State had achieved, with others, in the making of the Belfast Agreement.

Chairman of the Glasnevin Trust John Green said Collins and Griffith the fact that both men had been signatories to the Anglo-Irish Treaty had brought them together in history.

They had shared similar views, although they were now be associated with different political parties

“It’s good that we can look back and ask ‘what would things be like if these two men had lived?’ It might have been different.”

The ceremonies were followed by the Roger Casement commemoration, which included the annual Casement lecture delivered by resident Glasnevin Cemetery historian, Conor Dodd.

The event was organised by the Collins-Griffith Commemoration Society and the Glasnevin Trust.