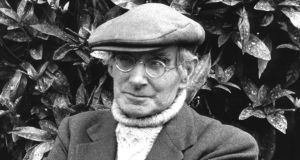 The Irish Citizen Army constitution was drafted by Sean O’Casey. Its first principle is that the ownership of Ireland, moral and material, is vested of right in the people of Ireland.

Tomorrow marks the centenary of the Irish Citizen Army. It was born as a workers’ self-defence force in the 1913 Dublin Lockout but it was March 22nd, 1914, that marked its political rite of passage into the world of realpolitik. On that day it ceased to be “an airy nothing”, as its first historian Seán O’Casey put it, and “began to forge its way into the stormy centre of Irish politics”.

It was a large gathering that met in Liberty Hall under the chairmanship of Jim Larkin, general secretary of the Irish Transport and General Workers Union. Those present, scarred by the experience of the Lockout, adopted a constitution, elected an Army Council and agreed the rules and regulations that would transform their aspirations into a programme of action.

The constitution was short and is worth quoting in full:

1. That the first and last principle of the Irish Citizen Army is the avowal that the ownership of Ireland, moral and material, is vested of right in the people of Ireland.
2. That the Irish Citizen Army shall stand for the absolute unity of Irish nationhood, and shall support the rights and liberties of the democracies of all nations. 3.That one of its objects shall be to sink all differences of birth, property and creed under the common name of Irish people. 4.That the Irish Citizen Army shall be open to all who accept the principle of equal rights and opportunities for the Irish people. 5. Before being enrolled, every applicant must, if eligible, be a member of his trade union, such union to be recognised by the Irish Trade Union Congress.

It was drafted by O’Casey but the last point was added at the suggestion of Larkin. It was formally proposed by Countess Markievicz, the only female member.


Industrial battles
Workers’ self-defence organisations frequently emerged in the bitter industrial battles of the era but usually disappeared once the conflict ended. The proto-ICA had many founders, but it was Larkin’s determination to embed trade union membership in its constitution that anchored O’Casey’s soaring vision to the material base that could make it a reality.

None of the other features of the constitution were remarkable in themselves. The “avowal that the ownership of Ireland, moral and material” rested with the people would not have been out of place in any socialist organisation, while the emergence of the Ulster Volunteer Force had already evoked a nationalist response in the Irish Volunteers, making weekend soldiering a popular civic pastime. What made the ICA unique was that all these currents converged in Liberty Hall. It was socialist, nationalist, internationalist and militarist in a uniquely Dublin way. Despite the national structures to which it aspired, the heart of the ICA, like the ITGWU, resided in Dublin city and county.


Seminal moment
Unknown to those gathered in Liberty Hall that afternoon, they were also creating the organisational bridge that would link 1913, the seminal moment in Irish labour history, with 1916, its nationalist counterpart. Whether that was a good thing has been the subject of debate ever since.

What is not in question is that the second phase of the Citizen Army, after Larkin’s departure for the US in October 1914, took a sterner military turn under James Connolly. His demanding regime saw membership shrink to a core of 250.

As Connolly himself liked to say, a pinprick in the heart of an elephant can be fatal and the micro army he commanded was strategically poised to deliver a pinprick in 1916. The ICA membership, concentrated in Dublin, provided almost a third of the force available to the insurrectionists that Easter weekend after the confusion of Eoin Mac Neill’s countermanding order left the IRB’s secret military committee bereft of troops. Without them it is hardly conceivable the Rising would have proceeded.

In a less tangible but more potent way the first clause of the ICA constitution was woven into the 1916 Proclamation and the democratic programme of the first Dáil. It should be included in any collection of founding PP documents for the modern Irish State. This is what makes March 22nd such a significant date. An ICA commemoration takes place at 3pm tomorrow at Liberty Hall, Dublin.


Padraig Yeates is a journalist, author and member of the 1913 Committee