Man of letters – An Irishman’s Diary about names and initials

‘There is a certain cachet to being identifiable by a triple-letter combination, as if you’re an airport code’ 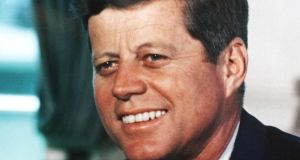 CJH (which, by the way, is also the code for an airport in British Columbia) is at least an associate member of an elite club that includes just three former occupants of the White House – Johnson (LBJ), Kennedy (JFK), and the second Roosevelt (FDR). Photograph: Robert Knudsen

As the TV series reminded us, the late Charles J Haughey had many claims to political uniqueness, good and bad. But not the least of them, I suggest, is that he is the only modern Irish leader to be instantly recognisable by his initials.

In this country at least, the letters CJH can still mean only one person. And although, like his fame in general, this is not necessarily a compliment, it does put him in a fairly select group, even among international statesmen.

Thanks in the main to the US presidency, there is a certain cachet to being identifiable by a triple-letter combination, as if you’re an airport code.

So CJH (which, by the way, is also the code for an airport in British Columbia) is at least an associate member of an elite club that includes just three former occupants of the White House – Johnson (LBJ), Kennedy (JFK), and the second Roosevelt (FDR).

The fame of their initials wasn’t always positive, either, at least in the case of Johnson. Mind you, he himself was so fond of his combination that he replicated it where possible. It helped that his wife was nicknamed “Lady Bird”. But his daughters were christened Luci Baines and Lynda Bird. And even his dog was named “Little Beagle Johnson”.

On the downside, the initials also lent themselves to catchy protest slogans of the kind that eventually helped make him an electoral liability. Thus at least some of their enduring fame is thanks to such anti-war chants as: “Hey, hey, LBJ/How many kids did you kill today?”

Haughey’s aside, middle initials seemed to go out of fashion, on both sides of the Atlantic, in the middle of the last century, rather like the hats that JFK (who had a vested interest in showing off his shock of youthful hair) is credited with consigning to history.

Before that, it was important for presidents to have the initial, even if it didn’t stand for anything, as in the case of Harry S Truman. After Johnson, however, presidential middle names became like appendices – there but not service any purpose.

This may have been partly the influence of the press. Newspapers have always needed to abbreviate where possible – hence Eisenhower’s ubiquitous nickname “Ike”, which made the initials DDE unnecessary. But they haven’t need to since Johnson, blessed with a succession of succinct presidential surnames from Nixon to Obama.

Still, tellingly, even in the one case where a triple initial might have helped avoid confusion – with the second George Bush – posterity has refused to award it recognition. Rather than GWB, the junior Bush has instead been pruned as “George W”, or just “Dubya”, depending on the level of respect intended.

Three-initial identification still seems to be popular in France where, for example, the letters BHL are immediately identifiable as the writer and “public intellectual” Bernard-Henri Lévy. Another well-known example, albeit thanks to a double-barrel surname, is former IMF chief Dominique Strauss-Kahn, widely known as DSK.

But there too, such fame can be a mixed blessing. As he attempted to relaunch his career last year after a series of sex scandals, Strauss-Kahn was forced to sue a brothel in Belgium that used the same letters in its name. The owner, whose nickname was “Dodo”, made a half-credible defence to the effect that his DSK meant “Dodo Sex Klub”. But sparing Strauss-Khan’s blushes (if he has any), a judge found enough wilful confusion in the case to order the name changed.

In Britain, strangely enough, I can’t think of a famous three-letter politician except, going way back to the 19th century, Gladstone. And in fact, his “GOM” was the contraction of a nickname, “Grand Old Man” (or as his less-than-admiring rival Disraeli preferred it “God’s Only Mistake”).

The best-known example in British public life since then, probably, was an Irishman, George Bernard Shaw. Even today, 65 years after his death, GBS remains a recognisable letter combination, although he himself hated the name George, preferring to call himself Bernard.

By interesting contrast, the current chancellor of the exchequer, George Osborne, is not a George at all, officially. He only adopted the moniker when aged 13, because he disliked his real first name, Gideon. As for his middle name, Oliver, there’s nothing embarrassing about that. But it’s probably just as well that he’s not well known by his three initials, or in attempting to extricate Britain from its current sticky financial situation, he’d be forever stuck with GOO.