Linen and the fabric of history

An Irishman’s Diary on flax and fibres 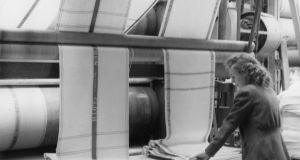 There is not much trace of the Dublin Linen Hall now. The names of the nearby streets (Lisburn, Lurgan, Coleraine) are among the few reminders that for most of the 18th century, linen drapers from all over the island, especially the north, were trundling to the city with cartloads of gleaming white fabric.

About 150 years before Belfast became the world’s “Linenopolis” – epicentre of the linen trade – Dublin fulfilled that role. The Linen Hall, a magnificent place modelled on market buildings in continental Europe, was built in the 1720s and flourished until the 1780s, when the northern linen-makers decided to bypass Dublin. In the 19th century, the building became a British barracks, and it was burned down in 1916.

Perhaps this turbulent history helps explain why Ireland has an ambivalent relationship with linen. On one hand, flax has been grown in Ireland, and linen woven, since ancient times: it’s mentioned in the life of Saint Brigid and in early Irish legal codes. The Tudor kings tried vainly to stop the Irish using so much linen in their yellow shirts.

But we have to accept that linen’s emergence as Ireland’s first manufactured export, in the 1700s, wasn’t a spontaneous process.

Like the building of the Dublin Linen Hall, it reflected a top-down economic policy which suppressed Ireland’s wool exports and determined that Ireland would instead send linen over the Irish Sea and increasingly across the Atlantic. And the flax grower or cottage weaver didn’t see much benefit.

So it’s understandable if Ireland has mixed feelings about linen.

True, growing flax and processing it have marked the lives of countless generations of Irish people. One of Seamus Heaney’s great poems, Death of a Naturalist, is about a flax dam. But the beauty of Irish linen has often been clearest to outsiders – like the Latina designer Maria Cardenas who set up shop in the Mourne mountains, or Marion Baur, a German-born weaver who lives in the Sperrins.

As a French philosopher might say, linen for the Irish was a floating signifier, a symbol with many meanings. As it happens, things were just the same in ancient Egypt and ancient Israel, as is explained in “On Earth as it is Heaven”, an exhibition on linen in the Bible that opens this week in Christ Church Cathedral, Dublin.

From the time civilisation flourished in Egypt, people learned to extract flax fibre, and to spin and weave that fibre into a noble fabric. They knew how to remove that fabric’s pale brown pigment, using alkaline detergent and sunlight, and how to hammer the cloth to make it even shinier. Pliny describes all this.

But in the worlds of the Old and New Testament, linen had contrasting resonances. In certain contexts, such as the veil which hung in the Jerusalem Temple, linen denoted earthiness, the vegetable kingdom, the soil – unlike the adjacent strips of wool dyed purple, blue and red which stood for water, air and fire.

That was one interpretation. Another stressed that wool came from mortal animals; in contrast to that, linen was better suited as a symbol of immortality.

And over time, in the spiritual code of ancient Israel, linen gradually acquired yet another meaning. Once it has been drained of its pigment and pounded until it becomes smooth and lustrous, white linen reflects the light, brilliantly. It becomes an apt symbol of heavenly light . . . the sort of light which is so powerful that the beholder becomes a bearer, a reflector of that illumination. In the Resurrection story, linen stands for both mortality and eternity.

The exhibition, on show till the end of May, includes contemporary images of linen-making in Co Derry.

Is it too optimistic to think that people in Ireland will accept that linen can have more than one meaning? A century ago, Irish linen output was geared to needs that were remote from ordinary people, from military aircraft to the upholstery of early motor cars, or damask tableware for first-class passengers on the Titanic.

But as some Irish designers know, nothing prevents people in Ireland from taking linen back, and sharing it with the world on their own terms. Linen has always had many meanings, and in the 21st century people can choose their own.