An Irishman’s Diary: An Influential Orator 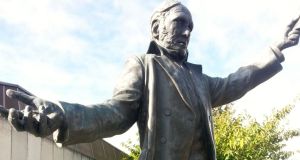 At the base of Rory Breslin’s fine bronze statue of James Fintan Lalor (1807 - 1849), standing dramatically outside County Hall in Portlaoise, are chiselled the words by which that great political visionary, land agitator and orator lived and died at the untimely age of 42 : “Ireland her own, and all therein, from the sod to the sky. The soil of Ireland for the people of Ireland.”

When we cycled down the hill from Raheen National School in Co Laois, the abandoned Tenakill House loomed like a haunted echoing chamber of the imagination where in the nursery long long ago the nanny had dropped the infant James Fintan Lalor, turning him into a hunchback cripple ever after. Whatever about that childhood myth, we knew little then of the historical facts of the remarkable Lalor family of political activists who lit up the landscape of the Queen’s County and further afield in 19th-century Ireland during some of its most turbulent times.

At the base of Rory Breslin’s fine bronze statue of James Fintan Lalor (1807 - 1849), standing dramatically outside County Hall in Portlaoise, are chiselled the words by which that great political visionary, land agitator and orator lived and died at the untimely age of 42 : “Ireland her own, and all therein, from the sod to the sky. The soil of Ireland for the people of Ireland.” Only in recent years has the influence of the powerful writings and rhetoric of Lalor been acknowledged on later historical figures such as Michael Davitt, James Connolly and Patrick Pearse, who wrote with admiration that his “new gospel was self-luminous, delivered in the ringing voice of an angel”.

James Fintan Lalor was the eldest of 12 children of Pat Lalor and Anne Dillon, born in 1807 at Tenakill, where his father owned 600 acres. Because of a congenital spinal condition and general poor health, he was educated by a tutor at home and later for a year at Carlow Lay College. His father was a Catholic emancipation supporter and friend of Daniel O’Connell. In 1831, when 25 sheep were seized from his farm because he refused to pay tithes to the clergy of the Established Church, Pat Lalor and his workmen branded the word “TITHE” on the sides of the sheep before the bailiff drove them off his land. Nobody would bid for the branded sheep at Smithfield Market in Dublin.

On the strength of this popular and effective passive resistance to the hated tithe system, Pat Lalor was elected as the first Catholic MP for the Queen’s County in 1832. At Tenakill, political tensions between father and son over repeal of the Act of Union often simmered and sometimes boiled over, as when James Fintan wrote he did not ever want to become one of O’Connell’s “creeping, crawling, cowardly creatures”.

The question of the ownership of the land, according to James Fintan Lalor’s unwavering lifelong conviction, was central to to the understanding of necessary political change, a national issue “besides which Repeal dwarfs down into a petty parish question”. Such was his hatred of O’Connell and the repeal movement that in 1843 he wrote to Sir Robert Peel denouncing them and offering the British prime minister any assistance he could in suppressing the movement.

In Brian Friel’s masterly play Translations, set in rural Donegal around these same troubled times, Old Hugh, the schoolmaster, philosophically reflects, “Confusion is not an ignoble condition.” That might have been a mantra at Tenakill.

In a series of letters and articles in The Nation and Irish Felon, Lalor grew increasingly more militant on the question of Irish independence. Only after Lalor’s death in 1849 did revolutionaries such as Michael Davitt realise that the land question would be, in Davitt’s words, “ the engine that would drive the Home Rule train to its destination”.

As the ghosts of the Lalor family gather at Tenakill this coming weekend, James Fintan’s younger brother Peter Lalor appears from behind the lace curtain cobwebs.

Celebrated as a national hero in Australia, he led the miners’ revolt at Ballarat in December 1854 for the right to form a trade union. In the cheap and hard seats in the Abbeyleix cinema we cheered when we saw a bearded and swarthy Lalor, played by Chips Rafferty, in a film called Eureka Stockade, rally and lead the miners into battle.

To complete the ghostly cast at Tenakill, another younger brother of James Fintan glides in – Richard Lalor MP (1880 - 1892), Home Rule MP and loyal supporter of Charles Stuart Parnell to the bitter end. Finally as a new dawn creeps over Tenakill House and the chimes strike, John Lalor-Fitzpatrick, Nationalist MP for the Queen’s County (1914 - 1916) takes his seat. The circle is complete.

‘After Blackadder, for the first time in my life it was dead easy to get in the door’
9