A film about two American cousins who’d previously never met, on an island they’ve never been to – why does the story of ‘The Crest’ speak so vividly to us all? 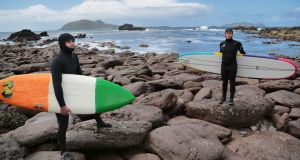 Denis DK Kane and Andrew Jacob prepare to take to the sea while filming the documentary The Crest at the Blaskets in Co Kerry. Photograph: Valerie O'Sullivan

There’s a treacherous stretch of the Atlantic that flows between the mainland and the Great Blasket island. Lives have been lost and journeys ended but it’s a place where magic happens too. Sixty years after the evacuation of the Blasket islands and the week of the Blaskets and West Kerry Gathering, two surfers, great-great-grandsons of Padraig Ó Cathain, the King of the Blaskets, are chasing waves in this most famous of Irish waters - and chasing them in turn is a US documentary crew, itself infused with the DNA of the island.

But this is no twee Irish-American romance. At the helm is director Mark Covino, whose latest documentary, A Band Called Death, the story of a 1970s African-American Detroit punk band, is about to get its theatrical release across the US. With the art of an outsider’s eye he’s shaping a very local tale called The Crest.

The two surfing cousins, Dennis DK Kane (25) and Andrew Jacob (33), hadn’t met before the trip. DK runs a surf board company in California where he shapes and builds boards. Andy is a commerical fisherman who lives to surf in New England where painting surf boards is his passion.Their grandfathers had been brothers and best friends but, seperated by their lives on either side of America, the cousins only met for the first time in Dingle. It was an awkward introduction, all caught on camera. But the boys hit it off and the spark that the producers were searching for took hold.

More family members, John and Eliza Kane, are producing The Crest, and it was they who wanted to forge a story from the island - but they wanted to make something bigger than just their own family tale. They see a hunger for identity in the US right now that’s greater than ever. Particularly among the second and third generations. “We are American through and through but there’s this layered generation that fosters a feeling of ‘I want to go to that place’. People want to find out where their family have come from,” Eliza explains. “And it’s this we’re trying to capture. This search for connection.”

Andy and DK have made connections all over the Dingle peninsula it seems, loving the hospitality, the occasion of the Gathering, the freedom that they are living. They spent most of the previous night locked into an unnamed pub in Dingle town, grabbing three hours sleep before our meeting in the Great Blasket centre at Dún Chaoin. The island is behind us as we talk. A hare runs across the grass. Birds fly in the air and the sun shines hard upon the sculpture of the fisherman outside. DK says this trip has been the single most exciting experience of his life. He’s bursting with pride and his tales of his few days with his new brother-in-arms trip over themselves as he tells them.

Getting to the Great Blasket is the peak though. They had both tried and failed in the past and now together they stood side-by-side on the ferry in the rain. They took turns when they got there: the first to land, the first to enter the kings house, the first to catch a wave, the first to cliff-dive into the warm Atlantic. “It was like a Blasket baptism,” Andy says laughing. “The rain stopped when we arrived. A group of donkeys came down to meet us. Seals splashed in the surf. It was like coming home.”

They mounted their surf boards and paddled along cliff faces, into caves and under archs knowing that they were seeing parts of the island very few people got to see. They stood in the king’s house and looked through his window, staring at the same view he would have seen. The house is tiny, they say. Someone left a mattress there, some graffitti. They felt like they should go back and fix it up.

They see parallels everywhere. The racks holding the naomhogs that resemble DK’s surf board racks in his workshop back home. The remains of the fishing industry that mimic Andy’s life in New England. They want to be at home and so they are. And proud of it.

They paint two surfboards at the king’s house, not knowing they are being watched by another island man – Mike Carney, the oldest living islander who was visiting the island, as he described it in his own words, for the last time. On the ferry home they talk to him and to the descendants of Robin Flowers, a British writer and folklorist who came to the island in 1910 to document the literature and life there. So many descendents together at one time. A small flicker of history passes between them and then they seperate again in Dingle, but the two men from America are bigger for it and somehow humbled by their experience, they say. But their smiles haven’t gone away.

Reunion is incredibly seductive. Particularly when you are trying to forge something unknown. It is, in essence, what the Gathering is for – to bring home those people who have become stories themselves. The emigrants and their descendants. It’s exciting and poignant all at the same time. Full of sadness and loss but well worth gathering for.