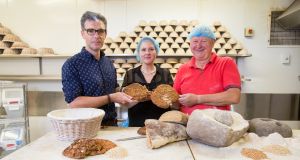 A groundbreaking investigation into the Iron Age period in Ireland by an international team of researchers is aiming to reveal what types of food our ancient ancestors survived on.

Using data and artefacts discovered from commercial digs during the Celtic Tiger period, archaeologists are attempting to piece together the dietary habits of people in the south east of the country between 2,700 and 2,000 years ago.

The study is novel as that area has traditionally been neglected in terms of archaeological research because agricultural practices and peat cutting have stripped away buried layers of history, according to UCC archaeology lecturer Dr Katharina Becker.

But by examining pollen grains from plants cultivated which have been trapped at the core of a lake in Kilkenny that dates back 11,000 years, she and fellow researchers from universities in Bradford and Warwick were able to radiocarbon date the items collected to give an indication of their age.

The Heritage Council funded “Settlement and Landscape in Later Prehistoric Ireland- Seeing Beyond the Site” project is also using seeds and animal bones recovered from road, gas pipeline and housing digs to gain an understanding of what Iron Age people ate.

“We have identified evidence of settlement, as well as arable and pastoral agriculture, indicating that communities were thriving in the south east of Ireland,” said Dr Becker.

She continued: “Cattle and pigs provided dairy and meat, barley was a staple, and we also have evidence of a variety of wheats, including spelt, emmer and naked wheat.

“We know that bread was around in Iron Age Europe and Britain at the time, the challenge was how do we make a bread with these sort of grains because barley is very low gluten so you have to mix in a certain amount of gluten-rich grains such as wheat.”

She said remnants of houses from the period do not have any recognisable hearths, indicating that communities may have regularly gathered around fulacht fiadh boiling pits for meals, but evidence of how everyday dining rituals were performed are still patchy.

So too is evidence of exactly what recipes and cooking methods were used to make barley breads, which is why researchers have partnered with Declan Ryan of Arbutus Bread in Cork to experiment with different measures and consistencies of flours to see what works.

Members of the public will be able to test the results of these experiments during an open day at Cork Public Museum on Saturday, and visitors can also witness the “painstaking” process of making these hard-to-bake, low gluten breads.

Although meat and dairy did form at least part of some meals, Dr Becker and her colleagues cannot as yet confirm how regularly these ingredients were used or by whom, but they hope to clarify such questions as part of their ongoing investigations.