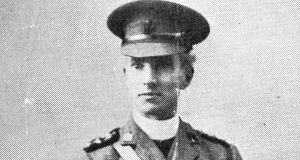 Fr Ned Dowling, who was a military chaplain during the first World War

The first World War diary of an Irish Catholic priest has been found during a house clearance in Co Laois.

Canon Seán O’Doherty, now the PP in Durrow, Co Laois has authorised the publication of Co Kilkenny-born Fr Ned Dowling’s diary, which covers the period from late 1914 until the summer of 1915.

Fr Dowling served as a British Army Catholic chaplain and was sent to Flanders in November 1914, where he served with the Royal Dublin Fusiliers regiment.

The full 90-page transcript of the diary (seen exclusively by The Irish Times) will be published for the first time in 2015 in, Kilkenny Voices from the Western Front 1914-1918 – the latest publication by historians Niall Brannigan and John Kirwan.

Both men have spent the past two decades researching the first World War and, in 2012, published a monumental reference work, Kilkenny Families in the Great War, containing almost 3,000 short biographies of men and women associated with Co Kilkenny who were involved in conflict, of whom 400 died.

Describing a battle in early 1915 he wrote: “Shrapnel crashed down on the wounded, walking and lying, crashed into the swollen corpses of men and horses, and letting loose odours before which the other horrors of war took a back seat. The wounded were in a pitiable state.”

Another diary entry describes the night after a terrible battle: “When I reached the farm, I saw a strange sight, a great farmyard in the misty moonlight, covered with straw that moved up and down like the waves of the sea. It was uncanny. I wondered if I was quite well.

“Diffidently I remarked it to a stretcher-bearer. He was one of ours. ‘The wounded are under it, Father. We put the straw out of the barns under them, but with the pain they turn and twist until the straw is all over them and you can’t see one of them now at all.’ ”

Sex and Lies review: testimonies from women in Morocco
6

In a valley in Kerry, a man dies suddenly at a crossroads
10