Michael d’Alton (93) is honoured with the Légion d’Honneur on board the French navy vessel Somme at Dublin Port. Video: Daniel O'Connor 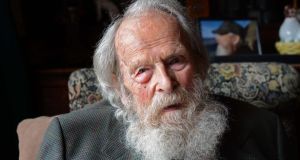 D-Day veteran Michael Dalton. His abiding memory of the day was the demise of a tank crew who had disembarked from a landing craft only to sink into a large underwater hole

One of the last surviving Irish veterans of the D-Day landings is to receive France’s highest military honour today.

Michael d’Alton (93) will receive the Légion d’Honneur on board the French navy vessel Somme at Dublin Port this afternoon.

Mr d’Alton was a sub-lieutenant on a landing craft bringing Sherman tanks across to Omaha Beach in the American sector on June 6th, 1944.

The landings at the beach inspired the opening sequence of the film Saving Private Ryan. It was based on the experience of the first companies of American soldiers who tried to take the heavily fortified Dog Green sector of the beach.

Mr d’Alton’s landing craft tank (LCT) left Plymouth on June 5th only to turn back half-way across the channel because of bad weather.

When it eventually sailed, it was part of the largest armada in history. Mr d’Alton recalled that the number of craft crossing the English Channel was “absolutely unbelievable”.

The slightest lapse in concentration could have lead to a collision.

The LCT in which Mr d’Alton was second-in-command almost blew up on landing as it was beached on top of a highly explosive Teller mine.

His abiding memory of the day was the tragic demise of a tank crew who had disembarked from a landing craft only to sink to the bottom of the sea on the edge of a large underwater hole.

“It was so simple and so quiet. It has never left me, the awfulness of their quiet demise.”

His reasons for joining the royal navy, shortly after he graduated as a quantity surveyor, were clear.

“I thought it was absolutely intolerable that Hitler was going to conquer Europe. I wanted to try and stop that awful German monster.”

The French ambassador, Jean Pierre-Thébault, will present the award to Mr d’Alton.