A clip from RTÉ's Insurrection, a documentary on 1916 that first aired in 1966. Video: RTÉ 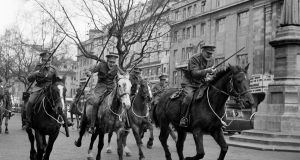 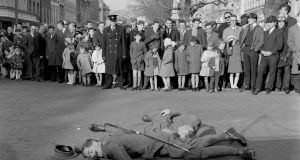 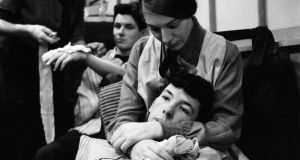 Sabina Coyne now Sabina Higgins, in a scene from ‘Insurrection’

“Undoubtedly the most difficult and ambitious project ever attempted by Irish television.” That’s how the RTV Guide (as it then was) described the TV drama Insurrection when it was broadcast for the first time in 1966 during commemorations of the 50th anniversary of the Easter Rising. Now being rebroadcast for the first time in 50 years, the series will run on eight consecutive nights on RTÉ One from Friday.

With Ray McAnally as a Walter Cronkite-style anchorman presenting the show from a TV studio, the series featured Ronnie Walsh as James Connolly, Eoin Ó Suilleabháin as Patrick Pearse and Joe Lynch as Cathal Brugha. Other performers included Anna Manahan, Jim Norton, Fionnula Flanagan and Sabina Coyne, now better known as Sabina Higgins, the wife of President Michael D Higgins. Over the course of each programme, “live” doorstep interviews by microphone-wielding reporters with figures such as Eoin MacNeill are interspersed with dramatised re-enactments of key events as they unfold across the city and the country.

“The style was going to be one of actual reportage,” director Louis Lentin recalled later. “We decided to take you the viewer back to 1916 and present the specific day’s programme as an involved news reportage of the events of that day.”

This formally innovative approach was inspired by a similarly structured 1964 BBC film on the anniversary of the Battle of Culloden.

“I suppose, in 1966, the whole idea of covering things live was remarkable,” says Bríd Dooley, head of RTÉ Archives, which carried out a full restoration of the series in 2007. Unusually for programmes from that period, the drama had been fully preserved. Video recording at the time was a cumbersome and highly expensive process.

“The whole selling point of video was you could re-use it,” says Dooley. “It’s tied up with the history of video and television itself. There was a lot of drama that wasn’t held. When it was over, it was over and that was that.”

At the time, the country had only had its own national TV service for less than five years. The fledgling television channel had developed some experience of covering major State events through John F Kennedy’s visit to Ireland in 1963 and the burial of Roger Casement’s remains in 1965.

Innovative producers and directors were beginning to expand its horizons and experiment with series such as The Riordans, which sought to introduce a greater note of realism through shooting on location on a real working farm.

In November and December of 1965 Michael Garvey directed a number of location film sequences for Insurrection, including scenes on Banna Strand, the lancers’ charge on Sackville (now O’Connell) Street, and Portobello Barracks.

“Everything on location was shot on film,” says Dooley. “Dublin was becoming quite a modern city, so a lot of things had to be recreated.”

Important buildings which no longer existed, such as Clanwilliam House, were recreated in studio, as was the interior of the GPO.

Insurrection was just one in an impressively broad range of productions mounted by Teilifís Éireann for the 50th anniversary, including children’s dramas, documentary portraits of the signatories of the Proclamation and a series about Irish history since the 17th century.

In addition, directors had been filming interviews with participants in the Rising for the preceding three years. These, Dooley says, now probably form the most important part of RTÉ’s historical archive. In 1966, it was deemed too controversial to broadcast The Plough and the Stars during the actual commemorations, but Lelia Doolan’s production, broadcast later in the year, was widely praised.

“On the other hand, as programme planners we are aware that the great bulk of our audience consists of men and women who were not even born, or were in their infancy, in 1916. Many of them have no clear understanding of the men who created the Rising. Our problem was to bring home to them some sense of the heroic drama of that week.”

Viewing the series now is an intriguing if sometimes jarring experience. RTÉ are rightly showing it in its original 4:3 screen ratio, so be prepared for black bands on the right and left of your screen. The staccato newsreel-style delivery verges on the comical at times, while there’s a staginess to some performances which has not aged well; and some of the location scenes were all too clearly done on a shoestring.

However, the entire project has a narrative clarity about the unfolding events of Easter Week, along with the sense of dramatic urgency which was so lacking from the recent, more conventional series Rebellion. Looking at the events of 1916 through the eyes of 1966 offers a different perspective on the Easter Rising, and is all the more valuable for that.

Insurrection starts on RTÉ One at 11.55pm on Friday