From the archive: Hunger-strike over

In this front-page article from December 19th, 1980, The Irish Times Northern Editor David McKittrick reports on the end of the 53-day hunger strike by seven republicans 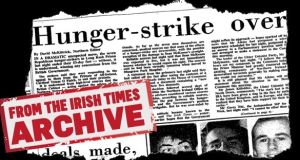 IN A DRAMATIC unexpected move, the seven Republican hunger-strikers in Long Kesh Prison last night ended their 53-day fast – without, it is understood, winning any concessions from the British Government.

The strikers said they were responding to the appeal to them from the Primate of All-Ireland, Cardinal Tomás Ó Fiaich, to end their protests.

It is understood from high-level sources that the British Cabinet- acting against the advice of the Northern Ireland Secretary of State, Mr Atkins- yesterday reached a firm decision to make no new moves to end the hunger-strike. The hunger-strikers learned this during the day, it is now known.

Their decision to call off the fast was apparently taken because one of their number, Sean McKenna, was obviously close to death. He received the last rites yesterday from a prison chaplain, the Rev. Thomas Toner, and last night he was moved from Long Kesh Hospital to Musgrave Park Hospital, in Belfast.

Whatever the humanitarian considerations, the ending of the strike, without winning concessions, is certain to represent a signal defeat for the Provisionals. As far as the seven men themselves are concerned, medical sources say that none of the effects of a hunger-strike are irreversible, with the possible exception of the damage to Sean McKenna’s eyesight.

Reliable sources last night said that Sean McKenna was expected to live, but it was not immediately known whether he would regain his sight. The sources said he had been virtually comatose when moved to Musgrave Park Hospital.

A statement from the prisoners last night said they had called off the fast after seeing the contents of a statement to be made today to the House of Commons by Mr Atkins, and a document containing a “new elaboration” of their five demands.

The Cabinet decision followed several days of intense activity within the Northern Ireland Office as Mr Atkins and his advisers considered various courses of action. Mr Atkins, according to reliable sources, had concluded that the gap between the hunger-strikers’ demands and the Government’s position might not be unbridgeable. But he was over-ruled by the Cabinet.

The Cabinet’s attitude became known to the hunger-strikers- and The Irish Times- yesterday. It followed earlier hopes that the Government might soften its approach- hopes sparked off by the news that Mr Atkins had postponed a television appearance scheduled for last night, postponed giving an answer to a Parliamentary question until today, and arranged to make a statement to the Commons this morning.

The leader of the Ulster Unionist Party, Mr James Molyneaux, said last night: “I believe the outcome bears out my comments in the Commons today that the Prime Minister had greatly reassured the law abiding community of Northern Ireland and demoralised terrorists generally by making clear that she would not surrender.”

It is still planned that Mr Atkins will make a statement about the situation in the House of Commons this morning.

Mr James Kilfedder, the Ulster Unionist MP for North Down, commented: “The stark fact is that the IRA have been given a slap in the face by the authorities in the United Kingdom, and in Europe, and they have realised that they have little support for their hunger-strike.”

Mr Gerry Fitt, the Independent MP for Belfast West, last night said: “I cannot be other than pleased that there is no further loss of life in the continuing tragedy of Northern Ireland.

“I would hope that now would be an opportune time for the men who have been engaged in violence to consider that the unity of Ireland and political change cannot be brought about by a continuation of the tragedy we have suffered for the past 12 years.”

Meanwhile, a leading nutrition expert questioned details of the hunger-strikers’ conditions given in a Northern Ireland Office bulletin yesterday. The bulletin said the condition of McKenna in particular was causing “serious concern,” and also said “The general condition of the seven hunger strikers continues to deteriorate and is causing increasing concern.

“However, the main risk to life at this stage is progressive disruption of vital bodily functions due to vitamin B deficiency affecting the brain. These changes become more likely to be irreversible the longer specific treatment is not accepted by the hunger-strikers. The brain changes are not affecting the level of consciousness or intellectual ability.”

In a separate bulletin last night, the NIO said: “As a result of Sean McKenna’s continued deterioration he has been transferred to an outside hospital where he will be under consultant care.

Dr Graeme Clugston, a nutrition expert at the London Hospital for Tropical Diseases, said yesterday he found the first bulletin hard to understand. Dr Clugston, who has not examined the hunger-strikers, said that the causes of death due to starvation were the heart, the chest muscles or the intestine.

He said it was unusual for any vitamin deficiencies to occur, although McKenna’s eyesight trouble was presumably caused by this. The brain itself was generally completely spared from any effects in starvation: “The body has a remarkable ability to spare the brain from any damage,” he said. “The only functional affect you get on the brain is a change in personality- the person becomes more irritable and so on.”

Dr Clugston said the eyesight trouble was the only one which might be irreversible. There were usually no lasting after-effects “virtually up to death’s door,” he stated.

A Northern Ireland Office spokesman said he had no comment to make on Dr Clugston’s remarks.

The Northern Ireland Under-Secretary, Mr Giles Shaw, said last night: “I can confirm that six of the original seven asked earlier this evening for food and medical attention, and said to the Governor that they were coming off the strike.

“The seventh is comatose in hospital,” he said, but the other prisoners had asked for him to be given all the attention he needs.”

The mother and sister of Sean McKenna had resigned themselves to his death, they said yesterday shortly before visiting him in Long Kesh. Asked if they thought he was going to die, McKenna’s sister, Ms Helen McKenna, said: “I think he is, I didn’t think he would see today.”

Ms McKenna, who along with her mother visited her brother on Wednesday, described his appearance as being like “a yellow skeleton”. She said that he didn’t seem to know where he was and “wasn’t with us half the time”. She added: “At this moment in time I would rather see him dead than live in there blind until he’s fifty.”

McKenna’s mother, Mrs Bridget McKenna, said she would like to see her son end his fast but when she visited him on Wednesday he couldn’t understand her. She said that her son was “very, very weak.”

Asked how they felt about the two people Sean McKenna was alleged to have attempted to murder, Ms McKenna replied: “It’s a war between Ireland and England, and if he’s an Irish soldier he has to do things that have to be done.”

Mrs Bridget McKenna claimed that her son had been illegally abducted across the Border by British soldiers. His subsequent trial by a no-jury court “didn’t give him a chance to redeem himself,” she added.

‘The Crying Game’: ‘They wanted me to cast a woman that was pretending to be a man’
8