Exit, pursued by a fish

An Irishman’s Diary about the little-known Lough Erne Monster 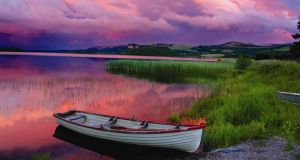 “But it wasn’t a gentle nibble on the line that roused them from their reveries. Instead they were startled by something visible in the river – the approach, at rapid pace, of a fish ‘of enormous size’.”

Researching the “Drummully Polyp” – that near-enclave of the Republic of Ireland surrounded by Fermanagh (September 18th) – earlier this week, I came across a strange story in this newspaper’s archive.

It dated from the years before the area became an international border. And in fact the setting was not quite what is known as the Polyp. It was slightly east of it, further along the river Finn, in what is now Northern Ireland.

There, one afternoon in June 1910, two McDonagh brothers from Drummully were “resting leisurely” in a boat. They were presumably fishing for roach or rudd, or maybe pike, or one of the hybrid coarse varieties with which the local waters teem.

But it wasn’t a gentle nibble on the line that roused them from their reveries. Instead they were startled by something visible in the river – the approach, at rapid pace, of a fish “of enormous size”.

It was coming from the direction of Lough Erne, into which the Finn empties, and its back was clearly visible as it “ploughed along the surface, raising great waves on either side”.

The brothers would later estimate its length at between 8 and 10 feet, “with proportionate girth and a very large head”. But they never got around to measuring it exactly. Nor could it be said that this was one that got away. In fact, the reverse would be closer to the truth.

So violently did the creature thrash the water around them that the McDonaghs feared for their boat. Far from wanting to catch the prodigy, they grabbed their oars and pulled hard for the nearest landing place, “pursued by the fish”.

They rowed for 500 yards into shallow water among reeds. Only here, unable to follow, did the fish relent and swim away up river to a smaller lake, where it disappeared.

The report of the incident notes that the local rivers were known for having pike of “huge” size, but adds: “One can scarcely imagine a pike of the dimensions described”. In any case, the brothers declared the thing they had seen to be, in both shape and size, unlike any freshwater fish they knew.

So during the days following, others had patrolled the banks or gone out in boats, intent on witnessing the phenomenon for themselves. But as the report concludes, the fish had not since reappeared.

And there, apparently, the story rests. I was hoping there might be an explanatory follow-up in later editions – perhaps an eccentric local landlord writing to the letters page to explain that his pet dolphin had escaped the swimming pool and that a reward was offered for its return.

But despite several searches of the archive’s deep-water areas, using a variety of baits, I’ve found no postscripts. The story seems to be like the fish itself, making one dramatic appearance and then escaping back into cover, never to re-emerge.

Were the brothers exaggerating, as fishermen sometimes do? Were they telling the truth, but as the victims of an elaborate practical joke? Had they been drinking bad poitín?

If it really was a fish, notwithstanding its size and apparent aggression, we can probably rule out a hitherto-unknown man-eating variety. There would surely be records of coarse fishermen who’d gone missing in the area, or of empty wellingtons coughed up on the banks.

Maybe, by contrast, there could be a mythical explanation. Perhaps what the brothers saw was the Salmon of Knowledge – engorged by centuries of accumulated wisdom and anxious to offload some of it on the nearest humans, who foolishly fled its advances.

Had Lough Erne been hosting an early-20th-century version of the G8 summit, other theories would present themselves. We might suspect the “fish” was a US submarine, or an outsized security man in wetsuit and flippers – neither of which phenomena would have been seen in Drummully before and might have been mistaken for wildlife. But there are no reports of any such event happening in 1910.

Whatever the thing in the water was, it strikes me as a lost tourism opportunity for a part of the country that could badly do with visitors. After all, the legend of the Lough Ness monster was built on little more.

With a bit of what we would today call “branding”, the mystery fish could have had tourists flocking to Drummully and its surrounds ever since. I wonder if, even now, during what remains of The Gathering, it would be possible for the creature to make a brief (but well-publicised) reappearance?