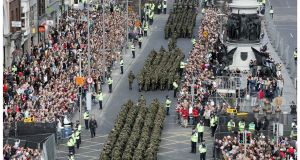 Some €48 million has been allocated to complete the Ireland 2016 Easter Rising commemoration programme.

Most of the money, some €31 million, will be allocated for capital works to complete the major capital projects associated with the Rising commemorations.

These include the GPO interpretative and exhibition centre, the new visitor centre at Teach an Phiarsaigh, Rosmuc and the refurbishment of Richmond Barracks in Dublin.

Provision has also been made for the development of a 1916 Commemorative Centre at 14-17 Moore Street and for a number of other commemorative projects, including at Glasnevin Cemetery and the Athenaeum in Enniscorthy.

The allocation for 2016 will also support the extensive list of State events and local community initiatives, with some 1,800 events announced nationally.

The National Library and National Museum, which both received an additional €2 million last year will keep the allocation for this year. Some of the increase will be spent on centenary programmes.

Culture Ireland’s budget will double from €3 million to €6 million to promote the centenary programme abroad.

Minister of State at the Department of Arts, Heritage and the Gaeltacht with responsibility for Culture Ireland, Aodhán Ó Ríordáin, said the increase was “fantastic news” for next year’s commemoration programme.