An Irishman’s Diary about paternal advice 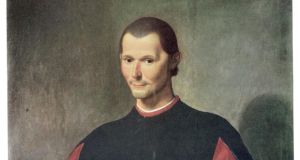 Machiavelli: saved from the rack and allowed to retire to a farm near Florence, where he wrote his great book

Lorenzo the Magnificent could easily have been the role model for Shakespeare’s Polonius, on the basis of the letter his son, Giovanni, found in his rooms the day he was inducted into the college of cardinals. It was April 1492, more than a century before Hamlet was first staged: the lad was just 16.

His father’s letter exhorted the young cardinal to be mindful of the magnitude of the favour bestowed on the house of de’ Medici, “the greatest dignity we have ever enjoyed” and understand that it was not through Giovanni’s merits or prudence that this had happened. He must seek to show his gratitude by a pious, chaste and exemplary life. It would be a disgrace, said Lorenzo, if Giovanni were to forsake the path he had trodden hitherto, and abandoned regular observance of the sacraments.

The young man was urged to keep regular hours and persevere in studies appropriate to his office, in effect to undergo an apprenticeship commensurate with his elevated role, and to keep a low profile.

“I well know that as you are now to reside at Rome, that sink of iniquity, the difficulty of conducting yourself by these admonitions will be increased,” wrote the Florentine leader.

Giovanni would probably meet with those who would “endeavour to corrupt” and incite him to vice, Lorenzo, warned, as his “early attainment to so great a dignity” was not observed without envy. Those who could not prevent the young de’ Medici receiving such high honour might endeavour to diminish it by inducing him to forfeit a good public opinion.

The entire Christian world would prosper if cardinals were as they ought to be, Lorenzo wrote. In the event, “there would always be a good pope on which the tranquillity of Christendom so materially depends”. Giovanni should always put the honour and state of the church and the apostolic see above every consideration. “Nor, while you keep this in view, will it be difficult for you to favour your family and your native place,” he added wryly.

As the youngest cardinal in the college, Giovanni ought to be “most vigilant and unassuming”. A handsome and well-ordered house would be “preferable to a great retinue and a splendid residence”. Silk and jewels were out. Instead, he should confine himself to a few elegant antiques or handsome books: “Invite others to your house oftener than you receive invitations. Practise neither too frequently.”

Then, as if in anticipation of Polonius’s advice t to Laertes, “To thine own self be true”, the father urged his son to observe one commonsense rule above all others: “Rise early in the day.”

This would be “of the greatest utility” to his health and expedite the business of a cardinal in the performance of divine service, studying, holding audiences etc.

This appeal for probity appears completely out of character in so unscrupulous a politician as Lorenzo the Magnificent. Throughout his life the de’ Medici chief had been ruthless in the consolidation of his banking family’s power in Florence. In addition, he had enjoyed a licentious lifestyle and, eschewing modesty, had spent lavishly as a patron of the arts.

The explanation, apparently, was that he was on his deathbed when he wrote the letter and seeking spiritual reconciliation through the good offices of the Dominican monk Savonarola. Lorenzo died shortly afterwards.

Whether Giovanni took his father’s advice to heart is unclear, but he did enough to become pope. As Leo X he left his mark on the course of world history in two seminal events. The first was his intervention on accession to the papacy in the rescue of Nicolò Machiavelli, who had served as Florentine vice-chancellor for 14 years.

Machiavelli was literally saved from the rack by Giovanni and retired to a farm outside Florence, where he wrote his great handbook of statecraft, The Prince .

Of even greater world import was Pope Leo’s refusal to take seriously a respectfully couched letter from Martin Luther, written in May 1518, who denied that he was a heretic and sought to publish “a little treatise to explain my Theses under the guardianship of your name and the shadow of your protection”.

Leo sidestepped his dying father’s advice and did not meet developments head on, but temporised for several years before finally excommunicating Luther in 1521.

Giovanni de’ Medici’s death that same year spared him from witnessing the fall-out from his indecision, with the Reformation in full bloom a short time afterwards.