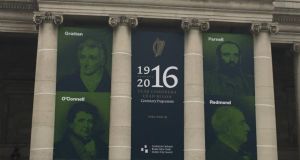 Dublin City Council had offered to remove the controversial banner at College Green, but councillors failed to meet deadline for vote on issue

However, its removal will not go ahead because of the failure of city councillors to vote in time on the matter.

The banner, featuring three politicians who died before the Rising and one who opposed the rebellion, has been a source of controversy since it was erected ahead of St Patrick’s Day.

Grattan, O’Connell and Parnell died respectively in 1820, 1847 and 1891, while Redmond described the Rising as a “wicked and insane” event.

The inclusion of Redmond was particularly unpopular with republican activists and politicians, while the 1916 Relatives Association said none of the four should have been depicted because of their lack of relevance to the Rising.

However, assistant council chief executive Brendan Kenny told councillors on Monday night he would have the banner removed the following morning if that was their wish.

“If the councillors are of the view this banner should be removed we’ll remove it tomorrow,” he said.

“We realise there has been offence caused by this . . . If this council feels the banner should come down, we are prepared to do that.”

Councillors from Sinn Féin, Anti-Austerity Alliance-People Before Profit, Fianna Fáil, and several Independents spoke against the banner, while Fine Gael and Labour councillors supported its retention.

Sinn Féin’s Greg Kelly, who proposed the removal of the banner, said he had the support of the majority of the council’s arts committee for its removal.

“The four figures had nothing to do with the Rising. Three were dead before 1916 and did not influence the Rising; the fourth, John Redmond was responsible for sending 30,000 Irish men to their deaths in Europe and called the Rising wicked and insane.”

Fianna Fáil councillor Paul McAuliffe said the lack of a recognition of the leaders of the Rising had caused offence. “It looked like one version of history was being pushed.”

However, Labour’s Dermot Lacey said those depicted were people who contributed to the development of the Irish independence movement.

Lord Mayor Críona Ní Dhálaigh warned the councillors at 9.28pm they had just two minutes to vote on the issue before the meeting ended.

The council said yesterday the banners would stay in place for “the duration of the commemorations programme”.

This is scheduled to continue to the end of the year.